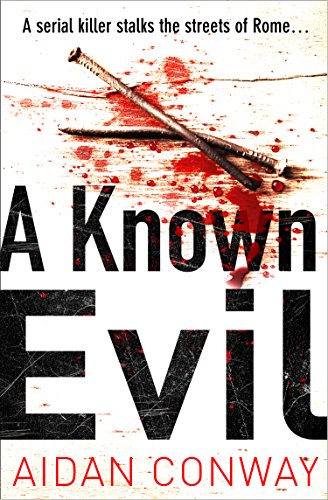 Today I’m delighted to be joining the blog tour for A Known Evil by Aidan Conway. The first book in the Rossi and Carrara series, and set in Rome, it was great to head off to a new country and meet new characters. I’ll share my thoughts on the text with you in a moment, as soon as we’ve seen what the book is all about. 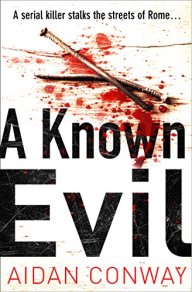 A serial killer stalks the streets of Rome…

A gripping debut crime novel and the first in a groundbreaking series, from a new star in British crime fiction. Perfect for fans of Ian Rankin.

A city on lockdown.
In the depths of a freakish winter, Rome is being torn apart by a serial killer dubbed The Carpenter intent on spreading fear and violence. Soon another woman is murdered – hammered to death and left with a cryptic message nailed to her chest.

A detective in danger.
Maverick Detective Inspectors Rossi and Carrara are assigned to the investigation. But when Rossi’s girlfriend is attacked – left in a coma in hospital – he becomes the killer’s new obsession and his own past hurtles back to haunt him.

A killer out of control.
As the body count rises, with one perfect murder on the heels of another, the case begins to spiral out of control. In a city wracked by corruption and paranoia, the question is: how much is Rossi willing to sacrifice to get to the truth?

From the off, I found myself slowly but surely being drawn into this thriller. This is, I believe, the first book I have read set in Italy and as is always the case with a new culture of experience, it took me a time to understand the politics and structure of the police force and the way in which is it informed and influenced by both good and bad – the Church and the Mafia. I’ll let you decide for yourselves which of those is which. Thankfully the writing was so clear and the situation so well explained that it all slotted into place nicely and with that out of the way, I found myself settling into a thrilling, often tense and occasionally dark read.

Our protagonists, Michael Rossi and Luigi Carrara, find themselves faced with the investigation into the murders of several seemingly unconnected women. Not only is there no link between them, other than their untimely deaths, but there is no similarity in their backgrounds. The only reason the police have to believe the deaths may be linked is the violent nature of the attacks and the fact that a cryptic clue is left at a couple of the scenes suggesting the killer, or killers, may have an agenda. The manner of death is increasingly violent, the locations obscure, the impact upon the community of Rome clear. As the case becomes more personal, Rossi is sidelined and decides to investigate for himself. It is a case which touches the heart of Italian culture, one which will intrigue and beguile the reader while still managing to provide enough shocks and surprises to enthrall fans of the genre.

Rossi is quite a complex character but one I like none the less. He is in a relationship with a woman he clearly cares for, and yet reluctant to take the ultimate step in committment to her. He is dedicated to his job, a methodical but tenacious Detective, perhaps somewhat jaded by the nature of the system in which he works, but there is something about him which I found intriguing and likeable. His partner, Carrara, is almost an exact opposite. Just as savvy to the ways of the police and the powers that be, he is a dedicated family man, yet every bit as dedicated to his job as Rossi. They make a great team.

The pacing of this book is slower than most thrillers, a lot of detail provided to readers within the narrative. It is largely needed, if only to set the scene adequately as otherwise it might be hard to understand the forces that are in play to determine the direction of any investigation and the level of potential corruption rife in the Italian political system. I am sure that most readers might think they know having seen the exploits of former politicians dissected in the media, but, while fictionalised, the retelling of this in A Known Evil, add clears context. While the pacing is not breakneck, there are still elements which will have you on the edge of your seat, and perhaps because rather than in spite of this, the tension is palpable and the sense of menace is always there, particularly in the scenes set in Sicily. The violence is kept off the page, but there is no doubting what has happened or the ferocity of the attacks, clearly explained without being too graphic. It’s a near perfect mix.

I really enjoyed this opener to the Rossi and Carrara series and I can’t wait to read more by the author. I’m not sure it works so well for the Italian tourist board, this is after all a book with a dark heart, but then us crime aficionados don’t read the books for the bright and fluffy stuff now do we?

My thanks to publisher Harper Collins UK and Killer Reads for providing an advance copy of A Known Evil for review. It is available now from the following retailers:

Aidan Conway was born in Birmingham and has been living in Italy since 2001. He has been a bookseller, a proofreader, a language consultant, as well as a freelance teacher, translator, and editor for the United Nations FAO. He is currently an assistant university lecturer in Rome, where he lives with his family. A Known Evil is his first novel.

Do check out some of the other brilliant blogs taking part in the tour. 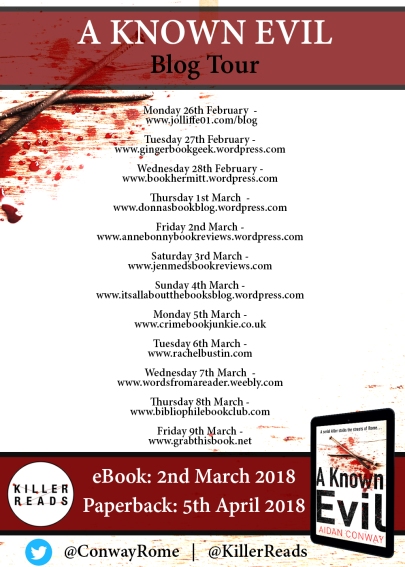 One thought on “#BlogTour: A Known Evil by Aidan Conway @ConwayRome @KillerReads”