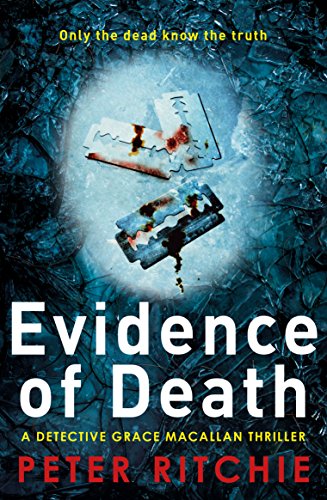 Today I’m delighted to be joining the blog tour for Evidence of Death, the second book in the Grace Macallan series by Peter Ritchie. My thanks to Lina Langlee at Black and White Publishing for providing the book for review and inviting me to join the tour. Let’s take a look at what this book is all about.

What the blurb says:

Billy Nelson is back home in battle-scarred Belfast. But the Troubles have cut this ex-Army Loyalist hard man deep – and now that his city’s allegiances have shifted, nothing is quite the same.

An outbreak of gang violence forces Billy to move on. This time to Edinburgh, where he muscles in on the capital’s drug trade and the family who run it. As the balance of power tips, underworld rivalries between Edinburgh, Glasgow and Belfast spill out onto the streets.

With a spate of horrific incidents and a trail of victims, the pressure is mounting for Grace Macallan, new superintendent of the Crime & Counter Terrorism Directorate. Troubled by her own demons and with everyone baying for the blood of Billy Nelson and his old paramilitary contacts, can Grace hold her nerve?

Revised edition – previously published as The Shortest Days of the Year

Now it is becoming somewhat of a habit with me, but this is the second book in the series and the first one that I’ve read. That said, I don’t think I was at too much of a disadvantage and the writing is such that I was easily able to slip into the world of Grace Macallan and her team of the Crime & Counter Terrorism unit. It may be my first read, but it won’t be my last as this was an exciting, well plotted and ultimately believable read clearly informed by the author’s own knowledge and experience.

Without going too far into the plot, the blurb really does tell you all you need to know, the story is set in the world of organised crime and gang violence. Former soldier and wanna be gang leader, Billy Nelson, is sent from Belfast in infiltrate and take over the drugs scene in Edinburgh. Billy is hard, merciless even, and is the perfect front man for a new drugs crew. He has his team of followers, those who support him without question, at least initially, and between them they are set to shake up the status quo in Edinburgh with deadly precision.

Grace Macallan and her team are the ones tasked with preventing it from happening. Faced with little information and a limited flow of intelligence from her counterparts in Ireland, Grace has a massive job on her hands. None of it is helped by an apparent ill wind from within the Police force, those who would happily see her fail. What we are left with as a result is a high tension, high stakes game of sorts in which the casualties will be plenty and the violence quite intense.

I really liked the character of Grace Macallan. She has her demons and her detractors, and she cannot do right for doing wrong, at least in the eyes of her colleagues, all of whom seem to be in fear of her success and her integrity. Her honesty and her willingness to stand up to corruption have cost her dearly and yet still she perseveres. She is intelligent, courageous but also vulnerable and watching her wrestle with her emotions when faced with her former lover, ultimately very human. She’s a great protagonist and backed up by a fabulous team, particularly McGovern who while a man who plays it quite straight, absolutely has Grace’s back. You can’t help but like and respect him. Then again you can’t help but respect Grace and root for her against those who would see her fail.

As for Billy Nelson. What a piece of work. He is highly intelligent but unfortunately uses his intelligence, and his skills, in an altogether vile and uncompromising way. Unafraid of violence, he has been shaped by his past on the turbulent streets of Belfast but this is not all that is driving him to do what he does. He has no capacity for pity and although his ultimate motives are not entirely clear, you know that he is a man on a mission. The violence he and his crew visit upon rival gangs and those who are associated with them will make your toes curl and Peter Ritchie pulls no punches in that regard. You may not be present in the moment of violence per se, but it is the implication and the description of the aftermath which makes everything abundantly clear.

This is no cosy crime. This is a combination of violence, gang culture and even a touch of terrorism with the capacity to shock but most definitely the ability to engross the reader and compel them to read on to the end. Pacing is sharp and perfectly pitched to match the storyline and there is no doubting the credentials of the writer which shine through in every element of the narrative. If you like a crime read with an edge, a grittier story which sits in start contrast to the beauty of the city in which is it set, Edinburgh, one which walks on the precipice of a darker shade of fiction, then definitely pick up this series. I don’t think you’ll be disappointed.

Evidence of Death was previously published as The Shortest Days of the Year and is available now from the following retailers:

Peter followed his forefathers and started his working life at 15 as a deep sea fisherman.

He eventually joined the police service moving through the ranks of CID/Murder Squad/Regional Crime Squad in Scotland. He then went on to manage the Organised Crime Unit in the National Criminal Intelligence Service in London where he ran a multi agency team drawn from various branches of the law enforcement and the security services. This was a unique concept at the time and Peter travelled to many parts of the world in this role. He was subsequently appointed as the UK Liaison Officer to Europol in The Hague where he spent five years.

He returned to Lothian and Borders heading the Major Crime Team before taking on an advisory role for a project in Croatia. Following his retiral he worked on a number of private investigations before spending the next few years as part of the public inquiry team looking into the murder of the LVF leader Billy Wright in the Maze Prison.

Do make sure to check out some of the other brilliant blogs taking part in the tour.