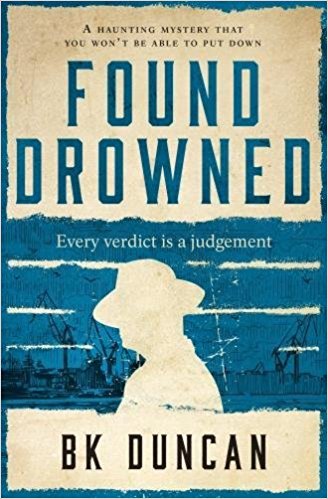 Today I am delighted to be joining the blog tour for BK Duncan’s latest May Keaps novel, Found Drowned. My thanks to Sarah Hardy of Bloodhound books for inviting me to be a part of the blitz and to the publisher for providing an advance copy of the book for review. Let’s take a look at what it’s all about. 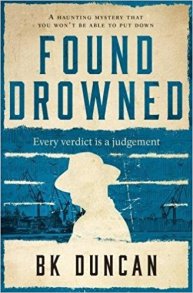 Are you looking for an unmissable historical mystery? Then you’ll love BK Duncan’s Found Drowned.

London. 1920 and coroner’s officer May Keaps is tasked with solving the mystery that surrounds the death of a young boy, found drowned in The Thames.

But was it murder or an accident?

May knows that when children go missing, the reason is often linked to money but she is in danger of underestimating the corrupting influence of power . . .

On streets where poverty and exploitation walk hand-in-hand everyone has a price. And some are more valuable dead than alive. But who is pulling the strings?

May must journey into the dark underbelly of London to find the answers.

This is the third May Keaps story I have read, the second full length novel, and I have to say, the more I read, the more I grow to like our intrepid heroine. She is a strong woman in a predominantly mans world and in spite of all the challenges, and threats, which fall upon her, she never backs down. She has some real guts that’s for sure.

This time May is faced with trying to find the identity of a young boy whose body is found floating in the Thames. His body is badly injured, a result of his time in the water and potential clash with one of the many boats, but worst of all, no one seems to miss him. As May tries hard to learn his story, sh finds herself drawn into a whole world of deception involving slave labour, workhouses, prostitution and corruption, a world in which her very life is one more under threat.

What I like about these books is the way that author BK Duncan has captured a real feeling of the old post-war East End of London.  There is a real feeling of authenticity to the writing, the spirit of the residents of the worlds that May inhabits, the restrained and yet wholesome relationships she has with her friends and yet the gritty and sometimes heart-breaking honesty of the portrayal of the workhouses and those people who are down on their luck.

This story in particular has a really dark edge, examining some very taboo subjects but in a rather clear and yet sanitized way. We are talking about the abuse of children here,  not  y family, but by men who are able to buy everything they wish. None of it is explained in a gratuitous way but there is no ambiguity about how some of these children make their living. If they are not on the streets then they are forced into working in a sweatshop, their futures still to be determined but with only one likely outcome. It is extremely sad, but the matter of fact way in which the children deal with their lot makes it somehow easier to deal with.

May Keaps is a brilliant character, full of life, confidence, bravado and insecurity all at once. I love to see the way her relationship with journalist Jack Cahill is developing. They play off each other perfectly, the chemistry clear to see and yet something, quite often their investigations, keeps coming between them. May is independent, infuriatingly so at times. Jack is patient and clearly infatuated. I am interested to see where this takes them. As for May’s boss, Braxton Clarke, there is also something there, hard to put a finger on what, but certainly something more than simply a boss/employee relationship.

The nature of the story means that this is not always the fastest paced read. Don;t let that fool you though. There are some moments of real tension, times when you feel that May might have taken one chance too many, her life at great risk as is that of those around her. Those are the heart in your throat moments, captured perfectly and still in keeping with the time and setting. And it is nice to see Brilliant Chang back. There is something about the man who I like and he is a truly fascinating character. Skirting on just the right side of the law, he is influential and enigmatic and yet clearly dangerous too. Love him.

This is a brilliant book and if you like your thrillers and mysteries with a more historical setting then I urge you to give this a go. Try out Foul Trade first to get a flavour for the key characters, but make sure you pick up Found Drowned too. Great characters, great story. What’s not to enjoy?

Found Drowned is available now from the following retailers:

BK Duncan is the pen name Ruth Wade has adopted for the May Keaps series of historical crime novels.

Born on a steam railway and brought up on the South Coast of England, such beginnings were destined to leave BK Duncan with a love of vintage transport, crashing seas, and Art Deco architecture.

Following a career encompassing developmental learning and change-management consultancy she now combines producing her own work with lecturing part-time in creative writing in colleges and academies in Cambridge and Oxford. Her two great passions are longbow archery and the Argentine Tango. Sadly, she is not nearly as accomplished at either as she’d like.

Makes sure to check out some of the other great blogs taking part in the blogblitz.