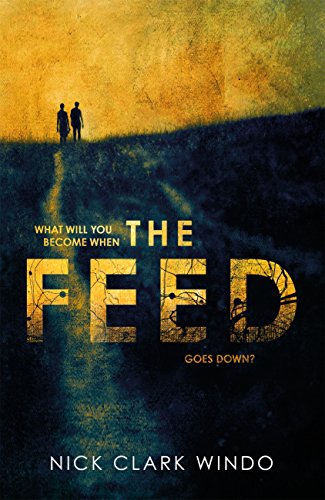 Today it’s my great pleasure to be taking part in the blog tour for The Feed the new dystopian thriller from Nick Clark Windo. My thanks to Anne Cater of Random Things Tours for inviting me to be a part of the tour. As soon as I read the blurb I was really intrigued by the concept of this book and couldn’t wait to read it. I’ll be sharing my thoughts in just a little while, as soon as we’ve seen what the book is all about. 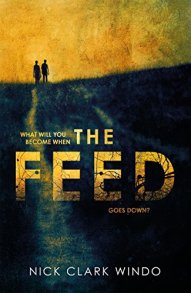 THE FEED by Nick Clark Windo is a startling and timely debut which presents a world as unique and vividly imagined as STATION ELEVEN and THE GIRL WITH ALL THE GIFTS.

Tom and Kate’s daughter turns six tomorrow, and they have to tell her about sleep.
If you sleep unwatched, you could be Taken. If you are Taken, then watching won’t save you.
Nothing saves you.

Your knowledge. Your memories. Your dreams.
If all you are is on the Feed, what will you become when the Feed goes down?

For Tom and Kate, in the six years since the world collapsed, every day has been a fight for survival. And when their daughter, Bea, goes missing, they will question whether they can even trust each other anymore.

The threat is closer than they realise…

I will be honest. I don’t read many dystopian novels. It’s not a genre I am overly familiar with but every so often I will dip my toe in the water and when I do I often find it’s far less scary than I was expecting. The same can’t be said of The Feed. But not in a bad way. Sort of. This is a very good book, very topical, very relevant and very, very bloody scary because of it.

Not scary in an all out gore fest kind of way, more because of the very nature of the novel’s structure. The fact that, for a very good portion of the novel you are not quite sure what is happening. What quite happens when they are ‘taken’. Our first experience of someone being taken is … well not really what I was expecting and it did make me question if I trusted the character, Tom at all. Very unusual circumstances to say the least and it had me completely foxed. But all is not as it seems. This is a book which is as much about the journey as the destination and finding out the truth will not make it any easier to stomach.

But it gives me a problem in as much as the fact that while this book is extremely well written, it’s also really hard to review. I kind of wonder what I can say that wouldn’t constitute spoilers. What I can say is that we are a little way into the future and society exists by way of an automatic feed of information and communication direct to the brain. Old actions, things we take for granted like talking and reading, are no longer part of everyday society. Life is the ultimate in information super highway with a connectivity that cannot easily be severed. Then something happens which threatens this existence and changes everything they know.

Fast forward several years and the remaining inhabitants of earth are living in fear. In fear of being ‘taken’ in fear of each other. Because they lack the skills we take for granted everything, even talking to each other, growing and preparing food, is that much harder.  This is where it gets really scary as, if we are all honest, this could actually happen. This is an element of advancement and innovation of technology which, if left unchecked, could become a reality. I was only joking the other day about how I never read any of my A’ Level english books, I just flicked through the Cliff Notes. The response I got was that now they just get the full synopsis or abridged story on Wikipedia. And how true that is. Each successive generation more and more glued to their computers and less absorbed in the reality of living. Quite an ironic thing to say given the time I am devoting to sitting in front of my laptop typing this review after reading the book on my kindle …

There is another element to this novel, one which I don’t want to discuss too much but that goes some way to explaining how the interruption of the feed comes about. Because at the heart of this story, beyond all the socio-economic and environmental commentary, lies a real mystery. Who broke the ‘Feed’ and why? And can what is happening be stopped? Do they want it to be.

There are elements of great tension to this book. Moments when you will be slightly confused as to what is happening. Moments when the absolute sadness and emotion that comes from Tom and Kate will tug at the heartstrings. For no matter whether you trust them fully or not, or whether, as the blurb suggests, they trust each other, they are just trying to survive, the best way they know how.

This book floats between character points of view, something which could become confusing but seems to work well here. The voices are distinct enough to separate them as we move from Tom to Kate. Sometimes it is hard to follow their point of view as they know what is happening and you don’t, that element of trust which is lacking making them appear as unreliable narrators. The characters they come across on their journey are varied and well fleshed out, their anger, power, manipulation and acceptance all believable. In fact everything about this book seems scarily real.

As I say, this is a very topical book, touching upon subjects which are hot topics right now, ones which may not entirely affect our generation, perhaps not even the next, but has the potential to affect future generations if left unchecked. The author manages to skilfully capture the emotion, fear, anger and mistrust which exists within those left behind, all set against a backdrop of futuristic disintegration in a landscape which is barely recognisable as Britain. Where the fight for survival is everything and although you may not always like or trust the central characters, you do want to see them come good. If you like a dystopian thriller, you are going to love this.

My thanks go to publishers Headline for providing a copy of The Feed for review. It is on sale from 25th January and can be preordered from the following links:

Nick Clark Windo studied English Literature at Cambridge and acting at RADA, and he now works as a film producer and screenwriter. Inspired by his realisation that people are becoming increasingly disconnected from one another, and questions about identity and memory, The Feed is his debut novel. He lives in London with his wife and daughter.