Today I’m delighted to be able to share my review of part two of Rachel Amphlett’s English Spy Mysteries series, Assassins Vengeance. I’ll be sharing my thoughts in just a moment as soon as we’ve seen what the book and the series is all about. 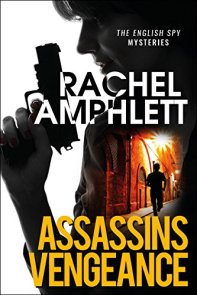 Spies. The best unreliable narrators that money can buy…

Eva and her fractured team are on the run, desperate to find answers and uncover who has betrayed them from within the shadowy government organisation known only as the Section.

Evading assassination in Berlin and Prague, Eva has had time to regroup and try to solve the mystery behind the attempts on her life.

But her enemies are one step ahead of her, eliminating anything and anyone who stands in their way.

Assassins Vengeance is the second episode in an ongoing story featuring Eva Delacourt. The story is concluded in episode 3 of the English Spy Mysteries, Assassins Retribution.

The English Spy Mysteries is a new concept by acclaimed crime thriller author, Rachel Amphlett. Combining fast-paced thrilling reads with episodic delivery in the vein of TV shows 24, Alias, and Spooks, series 1 is a must-read for fans of Robert Ludlum, Vince Flynn, and James Rollins.

Assassins Vengeance is the second part in a three part series of novellas from author Rachel Amphlett. Released over three successive weeks, this episodic thriller is both brilliant in concept and execution. Part one Assassins Hunted introduced the central protagonist, Eva Delacourt, and the circumstances which has seen her on the run from a mysterious government agency known as Section, alongside computer geek Nathan and a young six year old boy. If you want to know a little more about that book, you can read my review right here.

In book two we learn a little more about the appearance of young Alex in Eva’s life and the reasons why they are running in fear for their lives, including a couple of twists that even Eva’s long term friend Decker doesn’t know about. As they uncover more clues as to the reasons for Section’s move to placing Eva under a practical death sentence, it is harder to know who to trust. Moving quickly across Europe Eva, Nathan and Decker face a race against time to find the truth and perhaps the truth about why Alex’s father claimed he was the answer to everything.

What I have loved about this series, is the absolute sence of urgency which Rachel Amphlett has been able to create. Although the threat against Eva and co has perhaps not been quite so blatant this time around, with less direct attempts upon her life, there is no less feeling of jeopardy  or let up in the tension. If anything, as the reasons for the assassination attempt start to become clear, the threat levels begin to rise and so does the excitement.

There is a natural and easy camaraderie starting to evolve between the characters this time around, despite the threat upon their lives. A little spark between Nathan and Eva which feels as though it goes beyond friendship, but certainly shows a cementing of trust. I really like the pairing, the two complimenting each other and both contrasting to the brute force and cunning of Decker, about who there is also a surprising revelation.

This a good old fashioned espionage style caper but with a very modern twist. Linking back to the old Cold War era, the threat and menace created is real. While this episode is more a voyage of discovery than direct action, you can still feel the time pressure and the net closing in on Eva as Section begin to track her journey, the author doing a brilliant job of giving the reader that sense of just in time events happening.

There is less of a cliffhanger ending to this episode than in part one but be in no doubt. You will want to ind out what happens, how far the threat will be realised and just how far the corruption, if indeed there is any, spreads throughout the agency. Who can Eva really trust and she keep Alex safe as she promised all those years ago. Let’s just say that this time around the stakes are doubled and Eva’s caring and maternal instincts are really pushed to their limits.

Part three, Assassins Retribution is out next week, 21st January, and I can’t wait. In the meantime you can get your own copy of part two of the series from the following retailers:

Assassins Hunted, book one in the series, is available now from the following retailers:

Book three, Assassins Retribution, released on 21st January, is available for preorder from the following links: