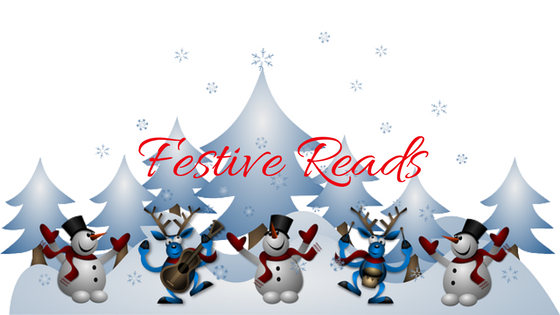 Always one to try to provide a balanced approach to things, I can’t let this Christmas feature be all good news, chocolates and kisses now can I? So, in order to redress the balance, and take the blog back to more familiar ground, it’s time to take a look at some Christmas themed crime, starting with The Advent Killer by Alastair Gunn. 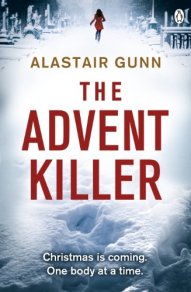 Christmas is coming. One body at a time.

Three weeks before Christmas: Sunday, one a.m. A woman is drowned in her bathtub.

One week later: Sunday, one a.m. A woman is beaten savagely to death, every bone in her body broken.

Another week brings another victim.

As panic spreads across London, DCI Antonia Hawkins, leading her first murder investigation, must stop a cold, careful killer whose twisted motives can only be guessed at, before the next body is found. On Sunday.

A terrifying British debut thriller, The Advent Killer introduces DCI Antonia Hawkins, with the second in the series coming from Penguin in 2014. Fans of Chris Carter and Richard Montanari should be paying attention.

What a way to start a series. This is book one in Alastair Gunn’s DCI Antonia Hawkins series and for anyone looking for a complete break from mince pies, mistletoe and goodwill to all could do worse than to take a look in this direction, as there is very little of any of the above to be found here.

Faced with investigating a series of murders, DCI Hawkins knows that she is racing against the clock to catch a killer. Each week, on a Sunday morning, a vicious murderer is killing women in increasingly macabre ways. Other than time of death, there is no apparent link between the three current victims, and no kind of sense of where the killer is going, or how, when or even if they will stop. And how do you catch a killer who leaves no clues and no forensic evidence behind?

Now this book really is the kind of advent countdown that nobody wants to be faced with. I’m perfectly happy with my Lindt calendar and a chocolate a day (other brands and chocolate free options are available). I’m fairly open minded and a not especially big fan of Christmas, but I’m pretty certain even I’d slum it and go for a Peppa Pig 99p calendar over the offerings left for Hawkins and her team. Not overly graphic in detail, the book still makes the killings clear enough and the cause of death goes from fairly innocuous through to really quite violent. It’s enough to make you push your mince pie to one side and sit up and take note for sure. It certainly did for me, grabbing my attention from the high stakes, and high tension prologue, and keeping me rapidly turning the pages in a bid to unmask the killer before the police.

Antonia Hawkins is a really interesting character. Struggling to get a break in the case, she is certainly painted as someone who lacks the street smarts to deal with the media, and it’s a kind of smack in the face when colleague and former lover, Mike Maguire, is brought in to take the mantel with the press. Perhaps this may be seen as a little misogynistic, the suave man verses the inept female but, to be fair, it’s also believable. In spite of this, Hawkins owns the case and has the respect of Maguire and her junior officers who follow her lead in working to distraction on the case. It is only when she makes a grave error of judgment that she is pulled from her position of power, a mistake she may only hope she can live long enough to regret.

Now I can’t say that the ending took me entirely by surprise, but I think it is still original enough and suitably well executed to keep the killer hidden from detection for quite some time. Whilst the majority of the story mirrors the investigation, part of the narrative follows the killer as they plan their next attack and you see the slow unravelling of an already broken mind. If you pay close attention there is a clear indication of their next target and also clues as to their identity, although you won’t get the why until much, much later in the text. If I had one criticism it would be the ‘confession’ towards the end where the killer spills their guts, perhaps a little too convenient in the circumstances, although not something which affects the overall outcome of the story as it turns out.

I could feel the growing frustration in the investigation team, particularly Hawkins, as she struggled to make sense of the killings, or to find a clue as to the perpetrator. I could also feel the pain which she went through when her colleague’s life was on the line. The whole situation humanised her and made her more likeable as up until then she had appeared a little snippy and, on occasion, acted as though she were a child spitting her dummy out. She is a strong character, but not always a likeable one, at least not for me at the start. By the end of the book I was more invested in her and also the team as a whole. The chemistry between Hawkins and Maguire was clear and I will be intrigued to see how it develops throughout the series. It’s certainly a series I intend to keep reading.

Overall I feel this was a very assured debut introducing an interesting team dynamic and an intriguing premise using a holiday killer. Enough gore to keep me satisfied, and enough moments of tension and action to keep the attention focused from the first page until the last. A proper nightmare before Christmas.

The Advent Killer is available now from the following retailers: