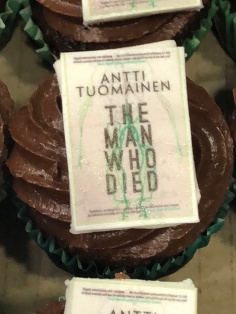 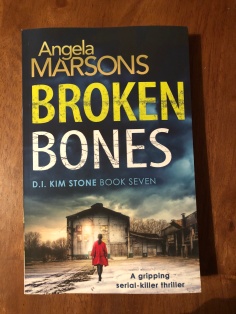 The three defining images from a wonderfully bookish week. I cannot tell you how perfect it is sometimes to be in this bookish world of ours. It has its down moments, doesn’t everything in life, but mostly it is a perfect place to escape to and one which makes me very, very happy. It is fair to say that this week I have been a very lucky and very spoilt book blogger.

It all began on Tuesday when I received some unexpected book post from Mulholland Books in the shape of A Map Of The Dark by Karen Ellis. What a start to the week.

Wednesday, I booked half a day off work and travelled to London to join Karen Sullivan and Antti Tuomainen for the UK launch of the absolutely hilarious and brilliant The Man Who Died. I love this book, definitely one of my top books for 2017 and if you want to know how much, my review can be found here. I was thrilled to be able to make this event. We were small in number but it was a brilliant night none the less. It also gave me signed book number one of the week. 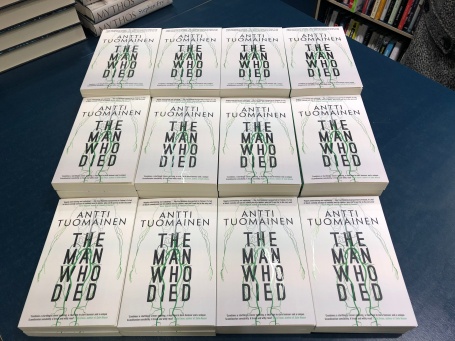 Arriving home on Thursday gave me my second absolutely bouncy moment of the week. Probably bouncier than Wednesday and I’d consumed a lot of caffeine on Wednesday to keep me going until I got home about 00:30. You see I arrived home to a lovely little package –  a signed copy of Broken Bones by the lovely Angela Marsons. For anyone who managed to miss it (lucky you – believe me) I did a (not so) short video review of Broken Bones for its launch earlier this month, It was my pleasure to do this as I love the Kim Stone series, I just hope it came over how much in the review. If you are daft enough or haven’t suffered enough already, you can find the review here. 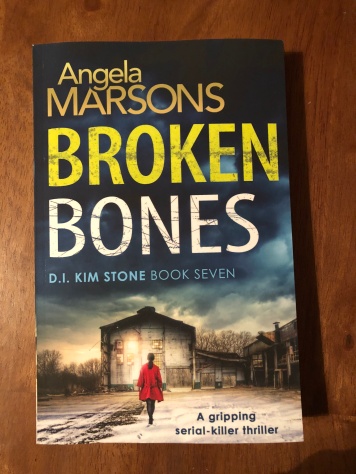 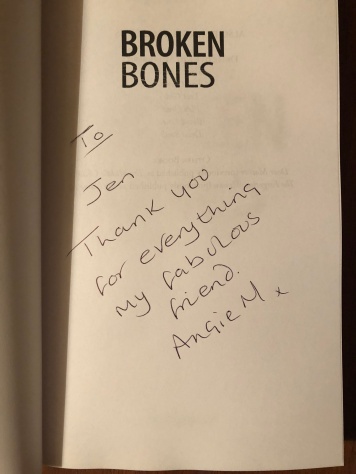 And then, as if I hadn’t been spoiled enough this week, Mandie and I took a short drive up North to Hull Noir on Friday. Two days of some very brilliant panels ensued, and it was lovely to be able to catch up with some of the top bloggers around including Susan, Rachel, Anne, Noelle, Sheila, Dave and probably one of the loveliest and most fabulous people I have met, my blogging twin, Abbie Rutherford. We started blogging in pretty much the exact same week and Abbie has been a huge source of inspiration and support to me so I so chuffed we finally got to meet. I can testify she looks nothing like her profile pictures! I also picked up another couple of signed books, this time from Mark Billingham – the first (Sleepyhead) and the most recent books in his Tom Thorne series. I recently reviewed Love Like Blood (here) and had a great compliment off Mark about it, so it was nice to be able to say hello and thank him for it in person. And I have smiley (and not so smiley) faces in my book too 🙂 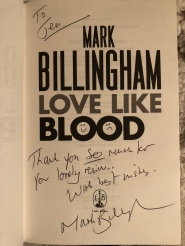 Panel wise, we took in three panels each day, listening to great talks from a wonderful bunch of Crime Writers on such a diverse range of topics. Far too many highlights to be able to list them all, each panel giving the audience something different. Martina Cole on Saturday was hilarious, as were Mark Billingham and John Connolly closing out the event on Sunday. 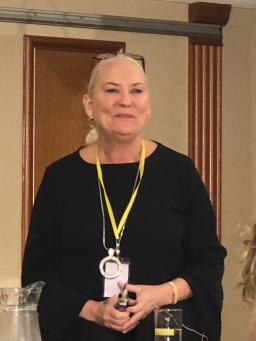 From Danielle Ramsay admitting to coming very close to antagonizing a real Whitley Bay gangster, Steph Broadribb admitting to defending a young girl’s honour in a kebab shop, through to Matt Wesolowski, author of possibly one of the most culturally and technologically relevant books of the moment, admitting to hating social media and steering clear of technology, you couldn’t ask for a better couple of days. Well done to all who were involved in arranging the event and thanks to all who took part. It was a bloody brilliant weekend. 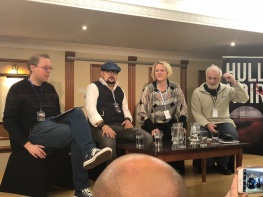 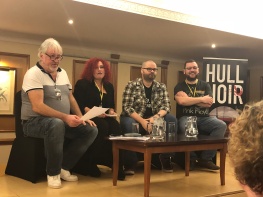 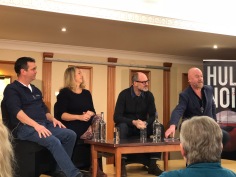 Anyway. All this travel really screwed up my reading and book buying plans. Other than the few mentioned above, I only managed to buy a couple of books … The Reunion by Samantha Hayes and Hell To Pay by Rachel Amphlett. Netgalley wise, I just picked up The Silent Children by Carol Wyer and The Cover Up by Marnie Riches.

Reading wise was quite pathetic too. I only managed three. And one of those was a novella!

It is April 1918. May Keaps is a twenty-year-old ambulance driver stationed at The Front. As if transporting hideously wounded soldiers, sleep deprivation and constant shell bombardment weren’t enough, she becomes unwittingly entangled in the untimely death of a young captain, Tobias Fairfax.

Newly-arrived in Northern France he was found with a discharged pistol by his side; rumours on the battlefield were that it wasn’t an accident and he had taken the coward’s way out, committing suicide.

Whatever the explanation, Tobias left a dangerous legacy that puts May in the line of fire. But she is not the only one with a reason to want to uncover the truth. And in a world where life can be extinguished in the blink of an eye, May might regret her search for answers…

The Last Post is the haunting introduction to the May Keaps series.

This was a great little novella, quite a serious subject but a wonderful introduction to May Keaps and I’m looking forward to reading her continued story. I’ll be sharing my review soon and you can pick up a copy for freehere. 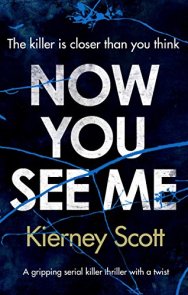 Now You See Me by Kierney Scott

As she saw his face for the first time, she knew he was going to kill her. She just didn’t know when.

When the dismembered body of Lydia Steiner is found washed up in the waters of a blisteringly hot Louisiana swamp, Detective Jess Bishop knows for certain this isn’t the murderer’s first kill.

Three other dismembered bodies have been found, all bearing the same marks. Marks that strike fear into Jess’s heart. They are identical to those from a case she’s spent her entire career trying to forget.

As Jess and her team try to link the victims, another body is discovered and they fear the serial killer is taunting them. They know it’s only a matter of time before he kills again.

As the body count rises, and the hunt goes cold, Jess knows she has to confront her past in order to catch the killer, even if that means making herself the bait…

Now You See Me is a gripping and heart-stopping thriller full of twists and perfect for fans of Robert Dugoni, Karin Slaughter, Robert Bryndza and Lisa Gardner.

Wow. What an opened to a series. You certainly get to know protagonist Jess Bishop and her partner Jamison pretty well. I’ll be sharing my thoughts as part of the blog blitz next week, but if you’d like to read a very assured debut for what looks set to be a cracking series, you can preorder a copy here.

The Deaths of December by Susi Holliday

Until DC Becky Greene starts opening doors…and discovers a crime scene behind almost every one.

The police hope it’s a prank. Because if it isn’t, a murderer has just surfaced – someone who’s been killing for twenty years.

But why now? And why has he sent it to this police station?

As the country relaxes into festive cheer, Greene and DS Eddie Carmine must race against time to catch the killer. Because there are four doors left, and four murders will fill them…

It’s shaping up to be a deadly little Christmas.

I listened to the audio book of this on the way to Hull and back. If you are looking for the perfect pre-christmas pain killer, something to capture the festive spirit in a completely saccharine free way, then this may be the book for you. I loved it, but then I’m anti-Christmas. I’ll be sharing my thoughts on the book soon in the countdown to December’s First Monday Crime, but you can bag yourself a copy right here.

That was it. A bit pathetic really given I was home for at least a couple of days last week 😉 Blog was busy though with posts all week. This past week marked a whole year of posting every day, apart from Christmas Day and Boxing Day. Quite an achievement I think. Thanks to Mandie for helping with that.

#FestiveReads: Christmas With the Bomb Girls by Daisy Styles

#FestiveReads: Mince Pies and Mistletoe at the Christmas Market by Heidi Swain

The week ahead is pretty full too. I have blog tours today for Hell To Pay by Rachel Amphlett, tomorrow for The Perfect Victim by Corrie Jackson and on Thursday for The CWA Anthology: Mystery Tour. On top of that are some reviews and a little more book love so I hope you can stop by for all of that. 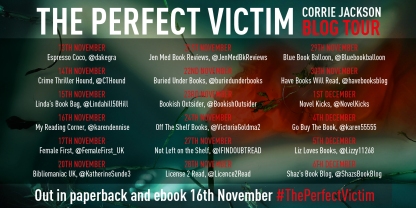 Have a perfectly bookish week all. I’m off to Dublin on Wednesday which means valuable reading time at the airport. Can’t wait.

See you next week

Busy month but quite impressed to have read 15 books and one short story collection.
Today @mandie163.mg shares her thoughts on Fatal Isles by Maria Adolfsson.
This week @mandie163.mg shared her thoughts on the fourth Lori Anderson novel by @crimethrillgirl, Deep Dark Night.
This week on the blog I reviewed Innocent by @erinkinsleyauthor
Absolutely delighted to join the #coverreveal for the brand new standalone thriller from Daniel Cole - author of the brilliant Ragdoll series. I loved those books so really excited to see what he has to offer is with #Mimic - being published by @TrapezeBooks on 19th August 2021.
I'm delighted to join the #coverreveal for the latest book by @msameliahenley - The Art of Loving You. it's out on the 22nd July and you can order a copy at the following link: https://buff.ly/3bzTw5Y