Today, Mandie reviews the new childrens’ books by Patricia Furstenberg, The Elephant and the Sheep, The Cheetah and the Dog and The Lion and the Dog which are all released today. Happy publication day Patricia. 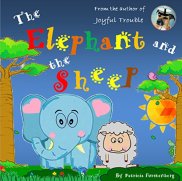 The Elephant and the Sheep

With poetic rhymes this striking picture book about the love and the simple kindness of a stranger is sure to touch a deep chord, particularly with fans of John Lennon’s “Imagine.”

When a lamb meets an elephant calf the two are happy to share a small patch of grass and a tiny water puddle available during the Big-Bad Thirst. None notices how different their bodies are, as the two are happy to spend their days together. Soon the sheep wishes that he, too, would arrive first at their meeting place and so he wakes up earlier and earlier each day. But no matter how hard he tries he cannot arrive before the elephant – because the elephant never left their tree, not having a home of his own. The sheep invites friend elephant to join her and her flock so that he will also have a family.
Inspired by the true story of Themba, the orphan elephant and Albert the good-hearted sheep that adopted him and cuddled him, the two remaining log-life best friends, “The Elephant and the Sheep” is a hymn to innocence and unconditional love, a read that is sure to warm up everyone’s heart.

The Cheetah and the Dog

When a cheetah cub and a puppy dog bump into each other while chasing the same prey, it is only natural for them to play together until sundown; and the next day; and the following one. The two animals care for each other so much that they even rescue their respective packs, thus becoming an African tale.

Inspired by the true story of Kasi, the orphaned male cheetah, and Mtani, the female Labrador, which struck a remarkable friendship and remained life-long friends, “The Cheetah and the Dog” is a glorious celebration of curiosity, respect for life, and unconventional wisdom, a heart-warming, fun read that belongs on any family’s bedtime shelf. 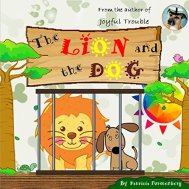 The Lion and the Dog

Here is a beautiful picture book with musical rhymes that celebrates diversity and promotes kindness, sure to strike a chord with the many fans of Louis Armstrong’s “What a Wonderful World”.

When a lion is removed from his natural habitat, forced to leave his African land and his pride behind and crowned King of Animals in a zoo, but acts out and becomes a secluded, captive beast all humans give up hope. Only a patient and observant brown little dog stands by his side and, through his optimism and kindness, turns the beast into a friend for life.

Inspired by the true story of Bonedigger, the disabled lion and the friendly Dachshund Milo who proved that friendship knows no boundaries, “The Lion and the Dog” is a brilliant, colourful tale that shines when read aloud and is a definitive must-have for all collections.

The Elephant and the Sheep, The Lion and the Dog & The Cheetah and the Dog are a fantastic set of picture books by Patricia Furstenberg.

The Elephant and the Sheep is a charming story about an unlikely friendship that develops in the desert. Brought together during the big bad thirst you experience how the friendship develops to the point that they become family to each other.

The Lion and the Dog is a story about a lion that is transported from his natural habitat to live life in a zoo. It shows that with a little bit of kindness and a lot of perseverance you can make a difference.

The Cheetah and the Dog is a lovey story about two totally different animals that come across each other by chance whilst chasing the same prey. This similar interest is the start of an unlikely paring and has them looking out for each other.

Told in gentle rhyme and based on true stories Patricia has once again managed to capture that magical world of animals that can translate into everyday life, showing that you don’t have to come from the same background to find common ground and become lifelong friends. The illustrations that accompany these books are fantastic and set them off brilliantly.

My son may be too old now to enjoy these books but I have to say that I am a big fan of Patricia and her style of writing. She certainly knows how to capture the imagination and each book has the ability to engage the reader no matter what the age and I would happily recommend them to anyone with young children.

These books can be read independently however I would heartily recommend that you buy as a set to complete your library.

With thanks to the author for providing the copies for review. The books are available from today from the following retailers: 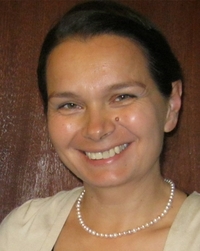 Patricia Furstenberg came to writing though reading, her passion for books being something she inherited from her parents.

She won two key legs (chapter six, “Someone is Missing” and chapter nine, “Reconstruction of the Crime”) of the Write Your Own Christie Competition and was runner-up for chapter four. The Judges “were impressed by her thorough investigation and admired the strength of her narrative; they were impressed by her style” and congratulated Patricia on winning the penultimate chapter. “This was perhaps one of the hardest rounds of the competition and the judges felt that Patricia’s chapter was confident and intriguing.” The judges thought Patricia’s writing style is “well structured, with a great sense of tension and suspense.”

When she’s not writing Patricia likes to read, read, read, drink coffee and listen to music.
One of the characters portrayed in her children stories is Pete, the yellow toy elephant. Not many know, but Pete exists and lives in Pat’s home.

This Romanian born writer is living happily with her husband, children and dogs in sunny South Africa.

3 thoughts on “Review: Elephant and Sheep and other stories by Patricia Furstenberg @PatFurstenberg @mgriffiths163”

Playing review catch up
Today I’m sharing my thoughts on The Last Time She Died by Zoë Sharp.
A big thank you to @headlinebooks for this #gifted #bookpost - a copy of Good Cop Bad Cop by @simon_kernick. Really looking forward to reading it for the @randomthingstours next month.
Treated myself to a new book this week - Billy Connolly’s Autobiography. Can’t wait to read it.
Today Mandie shared her thoughts on Facets of Death by @detectivekubu over on the blog.
Today I’m sharing my thoughts on The Lost Boy by @rachelamphlett