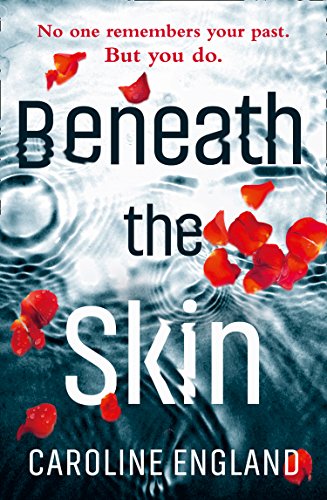 Happy publication day to Caroline England whose debut novel, Beneath The Skin, is released today by Avon Harper Collins. I had the pleasure of meeting Caroline earlier in the year at Crime Fest where we had a good chat about book marketing and blogging. I’m not sure if I was really much help to her, but I must have sounded convincing enough because Caroline kindly took some time out of her busy schedule in the lead up to her book launch, in order to answer a few of my random, and not so random, questions…

First up, let’s take a quick look at the book. 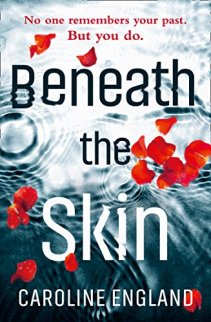 ‘I was gripped immediately – perfect for fans of Into the Water by Paula Hawkins’ KATERINA DIAMOND, author of THE TEACHER

No-one remembers your past. But you do.

‘Antonia, Antonia. My name is Antonia.’

It’s been her name for many years. But sometimes, like tonight, she forgets.

Antonia has a secret. A secret so dark and so deep that she can barely admit it to herself. Instead, she treats herself to Friday night sessions of self-harm while her husband David is at the pub, and her best friend Sophie is drinking too much wine a few doors down.

Nobody close to her knows the truth about what the teenage Antonia saw all those years ago. No-one, that is, except her mother. But Candy is in a care home now, her mind too addled to remember the truth. Antonia is safe. Isn’t she?

The lies start small. They always do. But when the tightly woven story you’ve told yourself begins to unravel, the truth threatens to come to the surface. And then what’s going to happen?

Thanks for taking part in this Q&A today. Before we get onto the more meaty questions, I’ve got a few quick fire ice breaker questions to help us get to know a little more about you 😊

I still have my copy of A Bear Called Paddington on my bookcase, so I must have liked that when I was very young, but when I was a little older I loved Jane Eyre. I still do!

Kate Atkinson. If my writing is ever compared to hers, even slightly, I will have won the jackpot!

Tricky. So many to choose from! Continuing the Peruvian theme, a thoughtful and delicate film set there called Undertow was wonderful.

What is your guilty pleasure?

Best compliment you’ve had for your work?

A recent review which included the words ‘Beneath the Skin for me was literary beauty’. Wow! That had me jumping about in a most inelegant way. Hope I wasn’t videoed by one of my cheeky daughters!

Funniest moment was me cracking up with laughter when I was reading a serious sex scene to my writing group. Most of them joined in!

The few notes I make are by hand.

Favourite place to write? Alone or in public?

Do you have a soundtrack for your writing? If so what is it?

I don’t like Jaffa Cakes so I don’t care!

Beneath the Skin is your debut novel, tell us a little bit about it and your protagonist, Antonia.

The story opens with Antonia, who bookends the novel. From the opening scene, we know something is badly amiss as she’s secretly self harming in the bath whilst her husband, David, is at the pub. But as the story progresses, we meet other characters who are equally as human, frail and flawed. As the layers of the story are peeled away, we gradually discover Antonia isn’t the only person with secrets that are ready to explode…

Have you always wanted to write in the psychological thriller genre? Are there any other genre’s that you’d consider writing in?

Beneath the Skin is very much at the ‘domestic noir’ end of the spectrum, so it’s a more nuanced, thoughtful read than a pacy police thriller. I love reading both crime and contemporary novels. I think my writing is a blend of those genres.

Although my novels and short stories often veer to the dark side, I like writing humour too! My first attempt at a novel could be described as legal chick-lit!

How and where did you start your writing?

The first few lines of the said legal chick-lit were written at my solicitor’s desk (but don’t tell anyone!) around ten years ago. When I left the law to be at home with my daughters, I started writing for fun. I began taking it more seriously over the last few years.

Tell us about your journey to publication? What made you choose a traditional publishing deal over self-publication?

Like most writers, I spent quite some time sending manuscripts to agents and getting rejected! Then I got lucky last year and found my lovely agent, Kate. She submitted Beneath the Skin and Avon HarperCollins showed interest pretty quickly, so it was a very exciting few months!

Many talented writers self publish very successfully, but personally I require validation! So I needed a commissioning editor to say my writing was good enough to publish.

Thinking back to when it all started, if there was one piece of advice you could give yourself as a novice writer at the start of your journey, what would it be?

Polish your manuscript until it’s as good as it can be, then consider paying for a professional edit before you submit it anywhere.

What has been the best part of your creating and launching Beneath the Skin so far?

How lovely and supportive people are. Not just family and friends, but other writers. At Crimefest and Theakston’s Crime Writing Festival, I was overwhelmed by such a friendly and encouraging bunch of crime writers.

We first met at Crimefest in Bristol, way back in May. How useful or important do you think events like that are for new writers?

Very important. I felt a fraud trying to network with proper published authors and bloggers, but everyone was so lovely, including you! I made some fabulous friends. Also, the panels are interesting and fun. I’ll be on a panel at Crimefest next May. I will be super nervous, but at least I’ll know what to expect.

Finally, as every writer is always already working on their next book before the ink is dry on the last, how is your next book coming along? Anything you can tell us about it at this stage?

I have just returned the page proofs of my next novel to my fab editor, Phoebe. It’s a story about four close friends whose lives change irrevocably at a wedding. All being well, My Husband’s Lies will be released by Avon HarperCollins next May!

Thanks Caroline. Here’s wishing you every success with Beneath The Skin. I’ve seen some fab reviews coming in already and sounds like book two is going to be another winner.

.Beneath The Skin is available to purchase now from the following retailers (Nov 17 in US):

Born a Yorkshire lass, Caroline studied Law at Manchester University and stayed over the border. Caroline practised family and professional indemnity law. She became a partner in a firm of Solicitors and instigated her jottings when she deserted the law to bring up her three lovely daughters.

In addition to the publication of her short story collection,Watching Horsepats Feed the Roses, by ACHUKAbooks in 2012, Caroline has had short stories and poems published in a wide variety of literary magazines and anthologies.

Her novelLie With Me Under the Toothbrush Tree was shortlisted for the Impress Prize 2015 and her novelTime is of the Essence was in the Pulp Idol 2016 finals and long listed for the UK Novel Writing Competition 2017.