Today it’s my great pleasure to be taking part in the blog tour for Sometimes the Darkness by Will Campbell. Many thanks to Rachel Gilbey of Authoright for inviting me to be a part of the tour. I have a fab character spotlight to share with you, just as soon as we’ve taken a look at what the book is about. 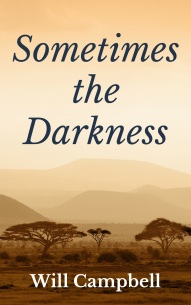 American Hanley Martin is troubled by his success. A wealthy aerospace industrialist, he was taught he should help others as a means of balancing the scales for his good fortune. He searches for ways to give back that will comfort his soul.

A trip to the Paris Air Show in 1999 changes the course of Martin’s life when the head of a Catholic mission in southern Sudan tells him of the need for pilots to fly medical supplies and visiting doctors to and from their remote clinic and school in Mapuordit, which sits on the refugee trail from Darfur to Kenya.

Sister Marie Claire, a French nun working at the Mapuordit mission, helps the Sudanese people fleeing the war in Darfur. She’s crafted a network of volunteers to save the children sold into slavery and forced to work in the country’s more prosperous cities. She needs only one additional piece to complete her plan.

As Hanley Martin and his plane arrive at Mapuordit, she asks herself if the American may be the answer to her prayers.

Sometimes the Darkness is the first novel by the author Will Campbell. It tells the story of two people brought together by fate and the price they pay helping a horrific war’s most vulnerable victims.

The protagonist of the novel Sometimes the Darkness is Hanley Martin, a wealthy and successful American industrialist. He is a complex character, a man of deliberate but quiet action, a trained and experienced pilot. He is divorced and lives alone.

Hanley is steeped in common sense and values that trait in others. He believes in being a good person. He also has an underlying self-doubt, which may seem improbable for a successful person, but was a prime motivation as he worked to succeed. He has a wry sense of humor and is, often, self-deprecating. He has a bit of the dutiful stoic in him.

But there is also the other, which haunts him-the issue of fate and the role he believes it played in his life.

Hanley was taught he should help others as a means of balancing the scales for his good fortune. When he was young, a teenager, Hanley Martin worked on his uncle’s farm, learning, among other things, that nothing in life comes without a price. Perhaps even a higher price for success. He searches for ways to give back that will comfort his soul, a means by which to repay this debt becomes his focus.

His search ends when he meets a priest while making his first ever visit to the Paris Air Show in 1999. A dinner party with friends and a guest, a Catholic priest, reveals the need for a pilot to move doctors and supplies to and from a mission in Sudan. This opportunity is the solution.

He cares deeply for others and feels the burden of the debt he owes for his good fortune. He loves his family and Rocky Vincenti, a widow living next door, now his lover. His adult daughter Elizabeth and Rocky, see his success only in terms of his hard work and ingenuity. They are perplexed by his obsession with fate and his belief  in the debt he owes for his good fortune. For them it is simple; he worked hard and succeeded. For Hanley it isn’t that simple.

He is a drinker but not a drunk. Drinking for Hanley is a way of dealing with the many issues he faces; self-doubt (worth), guilt, and fear. Glasses of Jack Daniels are the tubs he soaks in every night, easing his aching mind.  After arriving in Africa, his drinking results in some friction between Hanley and the French nun, Sister Marie Claire, who sees drinking as a sign of weakness.

Nothing keeps Hanley from doing what he must each day.

Sometimes the Darkness is available now from the following retailers:

Will Campbell is the pen name of Stephen Weir. He lives in Charleston and Greenville, WV. Stephen Weir is a former certified economic developer (CEcD) with over thirty years experience managing economic development organisations from the city to state level. He has also worked in international trade, helping establish the West Virginia’s first international trade office in Nagoya, Japan. He has previously published economic development articles and op-ed pieces in the Economic Development Review, West Virginia Executive Magazine and the Charleston Daily Mail and Gazette. His interest in politics, literature and writing led to the penning of his debut novel.

One thought on “#BlogTour: Character Spotlight – Sometimes the Darkness by Will Campbell @AuthorightUKPR @Gilbster1000”