Today I’m hading over to Mandie who has a review of Amanda Fleet’s Lies That Poison as part of the blog tour. We’ll take a look at the review in a minute, as soon as we’ve seen what the book is all about. 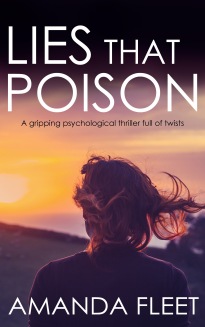 Do you love psychological thrillers? Discover a new writer who will have you gripped from start to finish. This is a novel with stunning twists that you won’t see coming.

WHOSE SIDE ARE YOU ON? DO YOU BELIEVE ALYS OR HANNAH?

When Tom Bowman moves to a pretty Yorkshire village to start a new business, he meets two women who will change his life.

Alys is a young woman with a troubled past, including an abusive boyfriend. She says she doesn’t want another man, but a relationship soon develops between her and Tom.

Tom’s other neighbour is Hannah, an elderly woman who is often confused between past and present. 50 years ago, her sister died tragically young. Now, she sometimes thinks that Tom is the man who was to blame.

Hannah hates Alys, and warns Tom that he is in great danger from the woman he’s falling in love with.

Who should he believe and who is poisoning his mind with lies?

In a pulsating conclusion, Tom faces a heartbreaking choice with the potential to shatter everything he has built. And will he finally find out the truth about Alys?

Lies that Poison is a psychological thriller that centres on the lives of Tom, Alys and Hannah. The story goes between the past and the present as it explains some of the actions of the main characters.

Tom has recently moved to the village to set up a cooking school at his home. Having grown up in the area as a child he decided that it was a good place to start again after the breakdown of his previous relationship. In an effort to fit in he tries to make friends with his neighbours, Hannah and Alys. Tom seems to be a genuinely nice guy. I have to admit if I was faced with someone who could be as nice as pie one minute and then seem to fly off the handle the way that Hannah did I am not sure I would be as understanding, he also seems to just brush off Alys’s mood swings.

Hannah has lived in the village all her life and knows just about everyone. Hannah is haunted by the past and will quite often reminisce about her younger sister who committed suicide. She is now prone to severe memory loss, one minute she is very coherent and the next she is confusing Tom with the person she blames for her sister’s death. She has also taken a dislike to Alys and is constantly warning Tom against her.  Due to the way that it is written, like Tom you can’t always be sure that there is any truth behind the things Hannah is saying or if it is just part of her failing health and confusion.

From the start you can sense that Alys is hiding something and this becomes more evident as the story progresses and it flits between the past and the present. Out of all the characters Alys is the one I connected with the least. She does not trust anyone and like Hannah can fly off the handle at a moment’s notice.  She suffers from some kind of eating disorder and although this is glossed over to a certain extent, it also comes up every time she and Tom have a meal together. She also seems to resent any help that Tom tries to give her regarding both food and career advice. To her any help he tries to give is seen as trying to control her. To a certain extent I can see her point as you do have to question as to when encouragement steers into trying to force someone to do something against their will.

There was only one thing that niggled me a bit (and if I am honest it is probably just me being picky). I know that they say that everyone has a double – I feel sorry for the person who is a double of me, but the fact that both Tom and Alys resembled the two people that Hannah held responsible for her sister’s death just seemed a little too convenient. That being said it worked for the story being told and made you question if Hannah had a good reason to dislike Alys or not.

Despite being a little slow in the beginning,  I found that once the story got going I raced through it. You know that it is not going to end well for someone but I will admit the ending was not quite what I thought it was going to be.

This is the first book by Amanda Fleet that I have read but I look forward to seeing what she writes next.

With thanks for Joffe Books for providing an advance copy of the book for review. Lies That Poison is available now from the following retailers 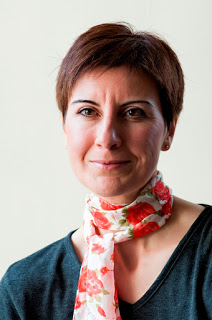 She has been an inveterate stationery addict since a child, amassing a considerable stash of fountain pens, ink and notebooks during her lifetime. These have thankfully come in useful, as she tends to write rather than type, at least in the early stages of writing a book.

During her time at St Andrews, she was involved with two Scottish Government funded projects, working with the College of Medicine in Blantyre, Malawi. While in Malawi, she learned about the plight of the many street children there and helped to set up a Community Based Organisation that works with homeless Malawian children to support them through education and training – Chimwemwe Children’s Centre. It was this experience that helped to shape the Malawian aspects in her first novel, The Wrong Kind of Clouds.

Amanda lives in Scotland with her husband, where she can be found writing, walking and running. The Wrong Kind of Clouds is her dÃ©but novel and was published by Matador in early 2016.

Why not check out some of the other blogs taking part in the tour.