It’s my great pleasure to be taking part in the blog tour for Maria In The Moon, the latest novel from Louise Beech and Orenda Books. My thanks to Anne Cater for inviting me to be a part of the tour and to Karen at Orenda for providing an advance copy of the book for review. I’ll be sharing my thoughts on the book in a moment, as soon as we’ve taken a look at what it’s all about.

Long ago my beloved Nanny Eve chose my name. Then one day she stopped calling me it. I try now to remember why, but I just can’t.’

With a promiscuous past, and licking her wounds after a painful breakup, Catherine wonders why she resists anything approaching real love. But when she loses her home to the devastating deluge of 2007 and volunteers at Flood Crisis, a devastating memory emerges … and changes everything.

Dark, poignant and deeply moving, Maria in the Moon is an examination of the nature of memory and truth, and the defences we build to protect ourselves, when we can no longer hide…

Oh my life. Where to even begin. After reading the wonderful The Mountain In My Shoe last year, the moving life book entries and the beautiful story which surrounded them, I didn’t think it would be possible for Ms Beech to move me more. And yet, with Maria In The Moon I think she has achieved just that. Considerably darker in tone than it’s predecessor, it has no less capable of capturing the heart and moving the reader. The central protagonist may be older, her character seemingly harder, but much like peeling an onion, each layer of her story that you uncover will leave you one step closer to tears.

It is hard to say much about the story itself without giving away key elements of the plot. The blurb does tell you all you need to know. Catherine is just about to start volunteering at a Flood Crisis call centre and it is at her interview that we join her story. A carer by day, volunteering is something she has always felt the urge to do, no matter the emotional toll it seems to take on her. She has elements of memory black outs, in particular parts of her childhood that she simply cannot remember, and yet other parts of her life, particularly her beloved grandmother and father, the memories are as clear as day.

The story follows Catherine from that very first meeting, to her first unofficial call taken at the centre; to the friendships she forms amongst her colleagues and the emotional journey she goes on with her callers. But nothing can prepare her, or the readers, for what is to come. And it is as the long buried memories of her past slowly start to emerge from the shadowy recesses of her mind, that the story takes its darkest turn.

There is a feeling of inevitability in the things Catherine discovers about her past but this makes them no less disturbing when they are uncovered. Louise Beech takes no liberties with what is a truly moving and disturbing story, not playing anything for shock value, taking the reader just to the verge of truly uncomfortable without pushing too far and yet still making the story alarmingly, painfully, clear. She has captured the gradual erosion of the wall which has been holding Catherine’s memories at bay just perfectly. You can feel the emotion seeping from the page, acknowledge Catherine’s highs and lows, and, as the story unfurls, begin to understand more the strained relationship she has with her family.

I think one of the most powerful parts of this book is the sense of helplessness that is captured in Catherine as she takes the calls on the helpline. You know she wishes she could do so much more, often struggling between training and empathy in helping the caller find their way. Often she is faced with despair; with stories so sad it allows her to forget her own worries for a while. It is not all sob stories; there is the essence of Ms Beech’s humour in there too as the volunteers take calls from not only the lonely but also the perverse who call the centre as it’s cheaper than the premium sex line numbers. Having worked in a late night call centre, this really made me smile. I recognise many of the characters depicted here, although thankfully never had to deal with any of the latter…

But there is one caller, Stan, who really breaks the heart. Alone in his apartment, his neighbours and friends driven out by the floods, and having suffered from a stroke, his link to Catherine, or Katrina as he knows her, is everything to him. Catherine comes to rely upon him too, understanding the sense of loss within him, the loneliness. And yet in each call she takes, she is sending herself down a darker path. Recurring dreams or nightmare, triggered each time she had worked as a volunteer; emotions which impact upon her ability to bond with others. Feelings which stop her from taking tentative steps with co-worker Christopher, even though the chemistry between them is clear.

And here Ms Beech has pulled a blinder. I can’t say more other than what she has done is most beautifully executed. The gradual unveiling of each truth; the confessions of Catherine and those around her. The absolute surety of the writing which leads us to the most heart-breaking and shocking scene of all… It is hard to articulate how I felt reading that chapter, and readers of the book will know which one. Can you, or should you, feel an empathy from someone so vile, so wrong, no matter the fate that befalls them? Well… this is the power of this book, because, in spite of myself and, in a large part, because of all that had come before it, my emotions and my senses were divided. Ms Beech – you are a little tinker. A bloody skilful one but a still a tinker.

Dark, compelling and overwhelming moving. What a book!

Maria In The Moon is available now from the following retailers.

Louise Beech is an exceptional literary talent, whose debut novel How To Be Brave was a Guardian Readers’ Choice for 2015. The sequel, The Mountain in My Shoe was shortlisted for Not the Booker Prize. Both books have been number one on Kindle, Audible and Kobo in USA/UK/AU. She regularly writes travel pieces for the Hull Daily Mail, where she was a columnist for ten years.

Her short fiction has won the Glass Woman Prize, the Eric Hoffer Award for Prose, and the Aesthetica Creative Works competition, as well as shortlisting for the Bridport Prize twice and being published in a variety of UK magazines.

Louise lives with her husband and children on the outskirts of Hull – the UK’s 2017 City of Culture – and loves her job as a Front of House Usher at Hull Truck Theatre, where her first play was performed in 2012. She is also part of the Mums’ Army on Lizzie and Carl’s BBC Radio Humberside Breakfast Show.

Make sure to check out some of the other fabulous blogs taking part in the tour. 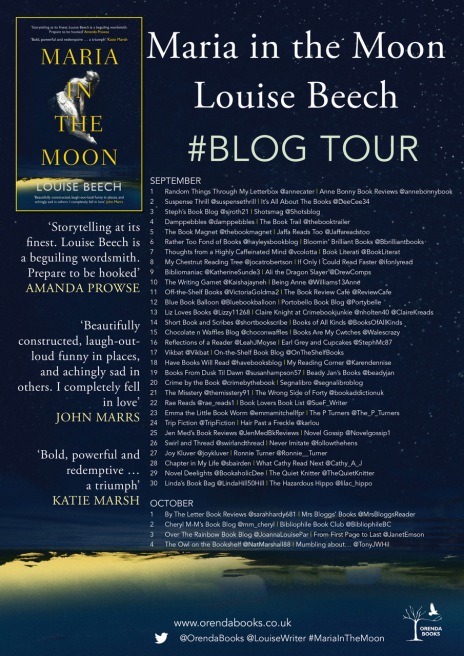 3 thoughts on “#Blogtour: Maria In The Moon by Louise Beech @LouiseWriter @OrendaBooks”

The Orenda Roadshow day four - The Bookcase, Lowdham at Southwell Library. Another fabulous night with lots of lovely books being bought. @orendabooks #orendaroadshow #yearoforenda
The ‘river’ Avon. Apparently. Looks more like Lake Ontario ...
Today on jenmedsbookreviews.com I’m resharing my thoughts on #DeepDirtyTruth by @crimethrillergirl in readiness for the release of the fourth #lorianderson novel, #DeepDarkNight next month. I love Lori and this book sees her in deep jeopardy, on the hook with the Miami mob as she fights to save her own life. Full of action and tension, fans of the kick ass heroine will love it. A price on her head. A secret worth dying for. 48 hours to expose the truth… Single-mother bounty-hunter Lori Anderson finally has her family back together, but her new-found happiness is shattered when she’s snatched by the Miami Mob – and they want her dead. Rather than a bullet, they offer her a job: find the Mob’s ‘numbers man’ who’s in protective custody after being forced to turn federal witness against them. If Lori succeeds, they’ll wipe the slate clean and the price on her head – and those of her family – will be removed. If she fails, they die. With North due in court in 48 hours, Lori sets off across Florida, racing against the clock to find him and save her family. Only in this race the prize is more deadly – and the secret she shares with JT more dangerous – than she ever could have imagined. In this race only the winner gets out alive… #booklove #lovebooks #books #bookstagram #bookstagrammer #booksblogger #bookblog #bookblogging #bookbloggers #booknerd #bookworm #booksofinstagram #booksofinsta #bookbloggersofinstagram #booklover @orendabooks #yearoforenda
Head over to jenmedsbookreviews.com and you’ll find my thoughts on #BetonRouge, the brilliant second Chastity Riley book by #SimoneBuchholz. This one has a slightly different styling to Blue Night, but still has the same sassy hard drinking prosecutor we all love, this time in the road with her new Investigative partner Ivo. I love Ivo. On a warm September morning, an unconscious man is found in a cage at the entrance to the offices of one of Germany’s biggest magazines. He’s soon identified as a manager of the company, and he’s been tortured. Three days later, another manager appears in a similar way. Chastity Riley and her new colleague Ivo Stepanovic are tasked with uncovering the truth behind the attacks, an investigation that goes far beyond the revenge they first suspect … to the dubious past shared by both victims. Travelling to the south of Germany, they step into the hothouse world of boarding schools, where secrets are currency, and monsters are bred … monsters who will stop at nothing to protect themselves. A smart, dark, probing thriller, full of all the hard-boiled poetry and acerbic wit of the very best noir, Beton Rouge is both a classic whodunit and a scintillating expose of society, by one of the most exciting names in crime fiction. #booklove @orendabooks #lovebooks #books #bookstagram #bookstagrammer #bookblogger #bookblog #bookblogging #bookbloggers #booknerd #bookworm #booksofinstagram #booksofinsta #bookbloggersofinstagram #yearoforenda
Had to drive through #wentshirewitch #changeling territory tonight to get home from the #orendaroadshow . No sighting this time around ...
My really lovely looking #OrendaShelfie now that I have @k_o_dahl’s #Sister along with the rest of the family. On the way for a spot of retail therapy and dinner now before @mandie163.mg and I hit the #OrendaRoadshow in The Wirral. #hariboanyone? #books #booklove @orendabooks #bookish #bookstagram #bookstagrammer #bookblog #bookblogger #bookblogging #bookbloggers #booksofinstagram #booksofinsta