Today I’m thrilled to be a part of the blog blitz for Robert Bryndza’s latest book in the Erika Foster series, Cold Blood which is released today. Happy publication day Mr Bryndza. A huge thanks to Noelle and Kim at Bookouture for inviting me to be a part of the tour. I’ll be posting my thoughts in just a moment, after we’ve taken a look at what the book is all about. 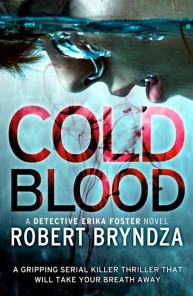 The suitcase was badly rusted, and took Erika several attempts, but it yielded and sagged open as she unzipped it. Nothing could prepare her for what she would find inside…

When a battered suitcase containing the dismembered body of a young man washes up on the shore of the river Thames, Detective Erika Foster is shocked. She’s worked on some terrifying cases but never seen anything like this before.

As Erika and her team set to work, she makes the link with another victim – the body of a young woman dumped in an identical suitcase two weeks ago.

Erika quickly realises she’s on the trail of a serial killer who’s already made their next move. Yet just as Erika starts to make headway with the investigation, she is the victim of a brutal attack.

But nothing will stop Erika. As the body count rises, the twin daughters of her colleague Commander Marsh are abducted, and the stakes are higher than ever before. Can Erika save the lives of two innocent children before it’s too late? She’s running out of time and about to make a disturbing discovery…there’s more than one killer.

Brilliantly gripping, Cold Blood will have you hooked from the first page and holding your breath to the heart-stopping and shocking ending.

Book five! Can you believe it? Was it really only last year that I was sat in my car trying not to go into work as I’d rather listen to The Girl In The Ice? Incredible really what a journey Erika and us poor readers have been on since then. An emotional and turbulent roller-coaster of a ride which continues at break neck speed with this latest offering, Cold Blood.

Starting with a body in a suitcase and ending with the kidnapping of Commander Marsh’s children, this is a story which from the very off pulls you in. The body in the suitcase is grim enough, but when a second body is found in a very similar condition, it falls to Erika to determine if there is a serial killer on the loose and to find what it is that connects these two seemingly random people who have no cause to know each other.

Interspersed amongst the police investigation are passages told by a young girl, someone who has found the love of her life. A man who both excites and scares her. A man who is about to set them both on a collision course where there can be only one possible outcome.

I don’t want to go too much more into the plot than that as to do so would be to spoil the story for new readers. Needless to say it is as twisted and tension filled as all of its predecessors. You know that when you pick up an Erika Foster novel, you are going to be hooked and that you also need to be prepared to forego sleep. This one was no different. I wanted to know more about the young woman. To understand how her story fitted into the investigation? Was she the young woman in the second suitcase? If not, then how were they connected? To find the answer to that you’ll have to read for yourself but by golly, the answer is a doozy.

All of the usual suspects are back in this story, although I have to say, with some sadness, that following his injuries at the end of the last book, Petersen doesn’t feature quite as much. He is still there, his relationship with Erika soured, and it will certainly be interesting to see how his imminent return to duty affects things moving forward, but his absence does change the team dynamic somewhat. Moss is still as direct as always and her pairing with Erika is both direct and work focused but fun at the same time. Erika is as tough as ever, and having turned down promotion, having to break in a new Superintendent which it goes without saying is far from straight forward.

And Marsh is back. Cleared of charges of corruption, he is grateful to Erika for her friendship; gratitude which puts them in a compromising position. It certainly impacts upon Erika’s investigation from the moment his children are taken, but this is not something our DCI will let stop her.

There are so many elements to this story that I could go on for hours, but I’ll spare you. What I will say is that this is a really intense tale at times, the powerful impact of the various relationships always bubbling just under the surface somewhere; mother to child, husband to wife, lover to lover. It makes you question nature verses nurture and the lengths people will go to in the name of love; the point at which love is no longer enough. There are moments of real tension, moments when our heroine’s life hangs in the balance, moments where you think there can be no way of a positive outcome. Moments that will make you both curse and smile as Mr Bryndza pulls off another blindingly excellent story.

If/when you pick up the book, make sure you have plenty of time on your hands. These books should come with a disclaimer as once you start reading you aren’t going to want to walk away. This is a book you are going to want to feast upon and devour as fast as you can. Woe betide anyone who dares to distract as you do so.

Cold Blood is released today and is available to purchase from the following retailers.

Robert Bryndza is the author of the international #1 bestseller The Girl in the Ice. The Wall Street Journal and USA Today bestseller is the first book in the Detective Erika Foster series.

The Night Stalker, Dark Water and Last Breath are the second, third, and fourth books in the series, and the fifth book, Cold Blood is now available to pre-order.

Robert’s books have sold over 2 million copies, and have been translated into 27 languages.

In addition to writing crime fiction, Robert has published a bestselling series of romantic comedy novels. He is British and lives in Slovakia. 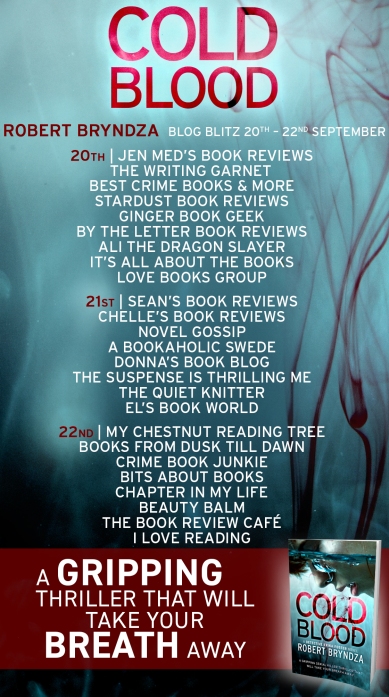