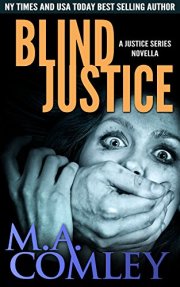 DI Lorne Simpkins and DS Pete Childs are called to investigate the death of Jenny Bartlett, who’s decomposing body is found in a wooded area. When Lorne informs Jenny’s parents of her death they are understandably shocked but also confused by the news as they were under the impression their daughter was out of the country, working as a volunteer in Africa.

Delving deep into Jenny’s personal life leads Lorne to Jenny’s former boyfriend, Simon Killon, after Lorne discovers they had a secret liaison in a restaurant shortly before her death. But is he guilty of Jenny’s murder?

After learning what traumas Simon himself has encountered lately, Lorne has her doubts that he’s the culprit. However she finds it hard to disprove the evidence pointing in his direction.

This short story precedes the first book in the Justice Series  by M.A. Comley and finds out hero DI Lorne Simpkins and her partner DS Pete Childs investigating the death of a young woman whose family thought she had gone abroad and whose colleagues thought she had just upped and moved to another firm. There is one small issue – she was close to having an affair with one of her colleagues and a former boyfriend, someone who is now prime suspect in her murder.

This is brilliant little read and will give anyone not aware of the series or the characters a good insight into what they are all about, particularly protagonist Lorne Simpkins. Perhaps a more dedicated police officer than she is wife or mother, she is a feisty and strong character who will take on anyone and also has a great deal of sense. Her partner refers to it grudglingly as her ‘women’s intuition’ but in truth is it good old fashioned common sense and a good dollop of police work. As for Pete – well he makes me chuckle. Called Chunky by Lorne due to his addiciton to KitKats of the chunky variety he is the perfect counter to Lorne’s character and they make a great team.

I won’t say too much about the plot as this is a short story centered around a very small group of people and with only one murder. Needless to say that nothing is every straight forward and the most obvious answer might not be the right one. It is fast in pacing and holds attention right to the end. Highly recommended for anyone who is thinking of dipping their toe into the Justice Series’ waters. Just be warned. This may be addictive so be prepared to be in it for the long haul. It is not always easy to read, this is one of the gentler titles, but the characters are likeable and the story compelling so why not give it a try?

Blind Justice is book 0.5 in the Justice Series by M.A. Comley and is available to purchase from the following retailers.