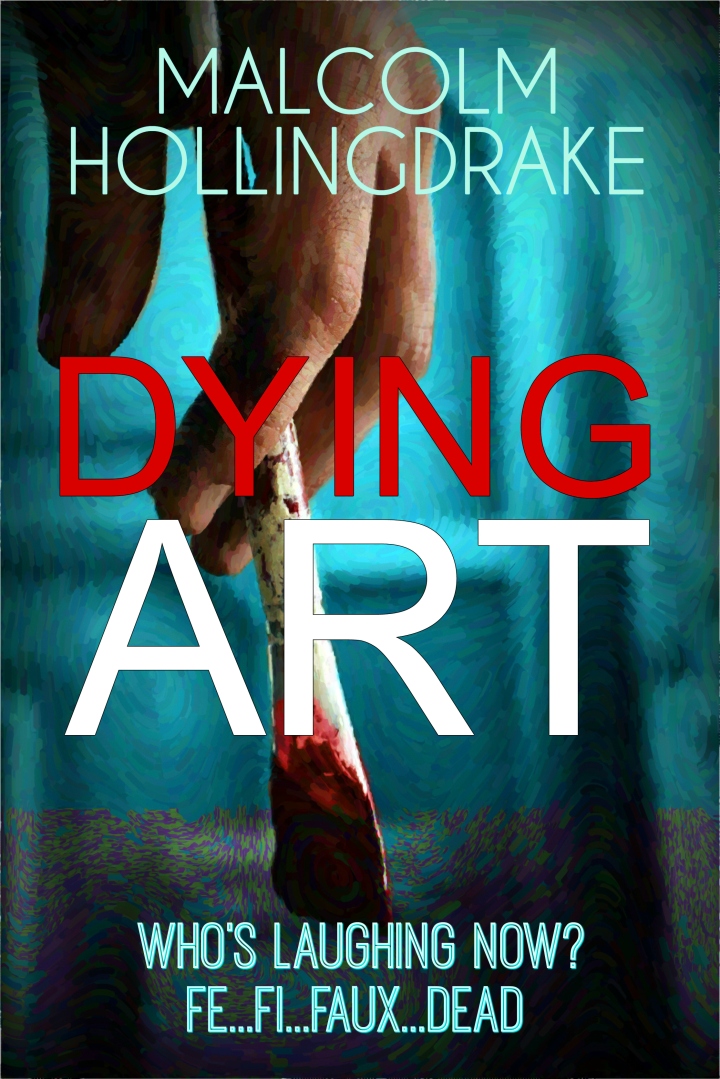 It is my absolute pleasure to be one of the two blogs opening up the tour for Dying Art, the start of a new DCI Bennett series from Malcolm Hollingdrake, alongside Caroline over at Bits About Books. Thanks fo Sarah Hardy at Bloodhound Books for inviting me to be a part of the tour. I have a fabulous guest post from Malcolm to share with you all in just a moment, including a short extract from the book, but first, here is what this book is all about.

Following his recovery from a personal and professional trauma, Detective Chief Inspector Cyril Bennett has been declared medically fit to resume his police duties. He returns to discover a complex case involving the art world.

Soon Bennett unearths a dark side of the industry where greed, ambition and dubious practices thrive and, where there is money to be made, violence and murder are never far away.

Working their way through a maze of galleries, museums and the internet, Bennett’s team struggles to make sense of the evidence.

Can Bennett tell the difference between what is real and what is fake?

I’ve always loved art; it was something I could always do. My father could draw, my uncle was a professional artist and I seemed to have been handed the gene. Art was never a threat. I remember one my first paintings, pinned to my Reception Class wall when I was five, I can see it now sixty years later. I had painted the earth from space, a marbled sphere set on a starry, dark blue background.

When things got difficult at school, it was the one skill I could always rely on. I was dreadful at spelling and struggled committing anything to memory, my brain wouldn’t stay still long enough, there was always a distraction unless, of course, I was creating something, unless I was painting or drawing.

I began to collect paintings by the northern artists later in life, Theodore Major, Lawrence Isherwood, Stuart Walton. They all painted a period in time that was relevant to my childhood. Growing up in the industrial north had both its advantages and disadvantages and these were captured within this genre of art. It was familiar.

I began attending auctions and buying and selling art, a love I bestowed on DCI Bennett. Passing on this love gave me the confidence to develop Bennett’s character; I knew the foundations on which he could be created.

So it was with this love of art that I wrote book five in the series. Owing to the nature of book four, I needed a way to reintroduce Bennett back into the fold and I knew the one way to do that was by creating a story around the art world and so, ‘Dying Art’ was born.

Throughout all the Bennett books I have referenced a number of northern artists from Braaq to Ben Kelly, a present day favourite, both of whom feature within the latest book. I always research my subjects to the best of my ability and with that in mind I’m grateful to a number of people who shared their experiences allowing me to paint an accurate story. What I soon realised was that behind most fraud cases is avarice. I open the story with a passage that I’d like to share with you now. I do hope that you enjoy, ‘Dying Art’, the opening book in the second series.

There have been many forgers and fakers throughout history going back to Roman times, each snaring the innocent and the greedy, each playing on the naïvety of hope and wealth. Can you believe that in the latter part of the twentieth century, some of the biggest art frauds took place against the growing forensic, scientific ability to investigate the very substance that makes a painting specific, not only to a date and time, but to a specific artist? So why do these fakes continue to plague both actual and on-line auction houses?

Over the last decade, television has been instrumental in demonstrating the power of art and antiques, the potential to find a hidden gem secreted amongst the detritus, flotsam and jetsam of the car boot sale or attic! It is this very desire to make a fortune that places the naïve in the clutches of those who have the ability to create something that will deceive, tempt and tantalise.

Between the years 1989 and 2006, a family from the North of England managed to develop an operation that would do just this. They would produce a large number of forgeries. They would go on to sell these fakes, not to the innocent or the aspiring private dealer, but to galleries, museums, auction houses and private wealthy collectors who were surrounded by experts and accrue well over a million pounds.

How was this possible? Not only were they capable of producing quality fakes, both two-dimensional and three-dimensional, they also managed to develop a system of creating false, yet realistic provenance, the history of the piece. And the real key to their success was to keep it all within the family, a family who did it for the challenge. Although amassing wealth from the illegal trade, it was a wealth that stayed hidden; there were no fancy cars or the usual trappings of ill-gotten gain.

So why did they fail? Thankfully, some specialists have a keener eye than others. Suspicions were raised when the forger was only too willing to lower the price when probing questions were being asked and doubts were being cast. Once the alarm bell had been rung, others listened. The dominoes began to fall, slowly at first, but the end result would be staggering.

It has been said by the police in the know that allegedly, forty per cent of art works traded through online websites may well be the work of forgers. It is always wise to go through reputable dealers and remember that when buying at auction: caveat emptor – let the buyer beware.

The foreground in a picture is always unattractive… Art demands that the interest of the canvas should be placed in the far distance, where lies take refuge…

Thanks Malcolm for sharing that with us. Dying Art is published by Bloodhound Books and is available to purchase now from the following retailers.

You could say that the writing was clearly written on the wall for anyone born in a library that they might aspire to be an author but to get to that point Malcolm Hollingdrake has travelled a circuitous route.

Malcolm worked in education for many years, even teaching for a period in Cairo before he started writing, a challenge he had longed to tackle for more years than he cares to remember.

Malcolm has written a number of successful short stories and has four books now available. Presently he is concentrating on a series of crime novels set in Harrogate, North Yorkshire.

Born in Bradford and spending three years in Ripon, Malcolm has never lost his love for his home county, a passion that is reflected in the settings for all three novels.

Malcolm has enjoyed many hobbies including collecting works by Northern artists; the art auctions offer a degree of excitement when both buying and certainly when selling. It’s a hobby he has bestowed on DCI Cyril Bennett, the main character in his latest novel.

Make sure to check out some of the other blogs taking part in the tour.

Today I'm delighted to join the blog tour for Twisted Lies, the latest Kim Stone novel from Angela Marsons.
Looking forward to taking part in the 15th anniversary celebrations of Quick Reads, the series designed to promote adult literacy.
This week Mandie shared her thoughts on The Ice Swimmer by Kjell Ola Dahl, from the Oslo Detectives Series.
This week I took a look at The Nothing Man by Catherine Ryan Howard.
This week saw the release of One Half Truth, the latest Zigic and Ferreira novel from Eva Dolan.
Today I share my thoughts on the Varg Veum thriller The Writing On The Wall by Gunnar Staalesen.