Today I am delighted to be signing off the blog tour for Calling Down The Storm by Peter Murphy, the fifth book in the Ben Schroeder Series. My thanks to Anne Cater and No Exit Press for inviting me to be a part of the tour. I’ll be sharing my thoughts on the book in just a moment but in the meantime here is what this book is all about. 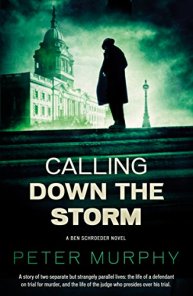 Calling Down the Storm is the story of two separate but strangely parallel lives: the life of a defendant on trial for murder, and the life of the judge who presides over his trial.

April 1971.When DI Webb and DS Raymond arrive at Harpur’s Mews in Bloomsbury in response to a 999 call, a horrific scene awaits them. Susan Lang is lying on the ground, bleeding to death. Her husband Henry is sitting nearby, holding a large, blood-stained knife. In shock, Henry claims to have no memory of the events that led to his wife’s death leaving his barrister, Ben Schroeder, little to defend a potential charge of murder.

Unknown to his strict Baptist wife Deborah who lives in the family home in Guildford, Mr Justice Conrad Rainer has a secret life in his London flat, a life as a high-stakes gambler. In his desperation for money to fund his gaming, he has already raided his own and Deborah’s resources, and now he has crossed another line – one from which there is no return.

To his horror, as the trial of Henry Lang starts, Conrad discovers a sinister connection between the trial and his gambling debts, a connection that could cause his world to unravel. And then, there’s the other terrible secret he is hiding in his flat. In a rare case in which the judge is in greater peril than the defendant on trial in his court, both Henry and Conrad have called down the storm on to their heads.

I will be honest. When I agreed to take part in the tour, I wasn’t really aware that this was the fifth book in a series. The premise interested me and so I was happy to take part. Now I don’t feel that I was at a disadvantage in not having read the first four books as there was enough explanation of the characters and setting in this book for me to easily find my feet. In fact, this could easily have been the first not the fifth book and as such I think you could happily read as a stand alone. It does, after all, surround one particular case, one defendant, and as such there is no carry over from other books.

With that out of the way, what did I think? This book was really intriguing to me. I will happily admit that, despite being a born and bred Brit, I thankfully know very little of the British legal system and the whole solicitor to barrister relationship still confounds me. I can’t say I’m much the wiser now and the fact that this book is set in the 1970’s means I don’t know how representative it is of modern day either, but given our country’s long running fascination with tradition and history, I can’t imagine it has changed that much. Peter Murphy made it much easier to follow and even with much of the ‘action’, as it were, taking place in the courtroom, the use of legalese was not overwhelming.

The story essentially follows the fortunes of Henry Lang, a man who has been arrested for the murder of his wife Susan. The murder was horrific, extremely violent, and yet Henry can recall nothing of the act itself. But is he merely acting or is he telling the truth? Can he possibly have blanked out the entire event? This is something both the Detectives in charge of the case, and his legal team, including Barrister Ben Schroeder, must determine if they are to get to the truth of what happened.

Mixed in with this is a side story, one which it is initially hard to see fitting into the central investigation. We meet Conrad Rainer, a Barrister who is on the verge of being given a Judgeship. Rainer leads a double life, one which puts him in a wholly compromised position and leads to highly questionable behaviour on his part. When he is appointed Judge over Henry Lang’s case, his distraction makes others question just whether he is fit to run the trial, and indeed on many occasions I wondered if his personal problems would work for or against the defence. Believe me when I say that with the nature of the conflict which arises between Rainer and the case itself, it could have gone either way.

This is not your fast paced drama. This is a good old fashioned court room drama, British style. You are not going to find your A Few Good Men ‘You can’t handle the truth’ style outbursts in this book. It wouldn’t be fitting for either the time or the setting. British justice is far more formal than its American counterpart which, in truth, the majority of people are probably far more familiar with from the myriad of programs on TV. I know I am. This difference is reflected in the language used, even when discussing the case in Chambers. This could be off putting for some who are not used to it, but I felt it was used very effectively here to create the drama and tension that the book required.

Although there was an element of the case being a foregone conclusion, we know from the off that Henry is guilty, there was plenty of doubt being drip fed into the action to keep it compelling. Indeed the Judge’s side story meant that I never quite knew what to expect, the frequent questions and comments in court, not typical or expected of a Judge, kept me as a reader on my toes, never knowing quite what he was thinking. And as for the Judge’s gambling habit – Murphy managed to capture the tension of the card tables perfectly. Not labouring the point but still managing to make me feel Rainer’s tension and portraying perfectly the sinking feeling experienced by any seasoned gambler whose addiction has fallen far out of their control. It probably helped too that the action here was set in a real club, up against real life ‘personalities’ not all works of fiction. If you wanted to, you could easily read up on some of Rainer’s gambling partners, see the kind of lives they lived and therefore picture the stakes the Judge was playing against. Lord Lucan, Kerry Packer, Dominick Elwes… You can google them all if the mood takes you.

If you asked me honestly, although this is billed as a Ben Schroeder novel, it was much more about Henry Lang and Conrad Rainer. In fact I’d go so far as to say that even Henry’s case was just the conduit bringing Rainer’s story to the fore. A kind of catalyst, if you like, for what happens to the Judge. If their paths had never crossed, would things ultimately have worked out the same way?

All in all this was a compelling courtroom drama. I became invested in Henry’s fate, wanting him to find some kind of justice, certain that there was more to the case than simply murder fuelled by hatred. But, perhaps more strangely, I also became invested in fate of Judge Rainer. Not a man I could instantly like, he was not painted in a particularly nice way at all and had all of the arrogance and confidence one expects from a gambler. And yet as a person overcome by his addiction, I did feel a strange sympathy for him. You’ll need to read the book to see if, in the end, he acted for good or for self preservation.

Calling Down the Storm was released by No Exit Press on 29th July. My thanks to the publishers for the advance copy of the book for review. You can purchase it from the following retailers. 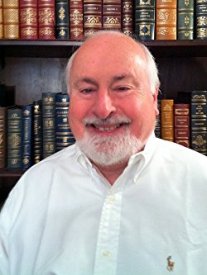 Peter Murphy graduated from Cambridge University and spent a career in the law, as an advocate, teacher, and judge. He has worked both in England and the United States, and seved for several years as counsel at the Yugoslavian War Crimes Tribunal in The Hague. He has written two political thrillers about the US presidency – Removal and Test of Resolve – and five legal thrillers featuring Ben Schroeder: A Higher Duty, A Matter for the Jury, And is there Honey still for Tea?, The Heirs of Owain Glyndwr and Calling DWebsiteown the Storm. He lives in Cambridgeshire.

One thought on “#BlogTour Review: Calling Down The Storm by Peter Murphy @noexitpress #PeterMurphy”