Today Jen Med’s is one of the two stops on the blog tour for Exquisite, the new psychological thriller from Sarah Stovell and Orenda Books. I’ll be sharing my review with you in just a moment, but for now, here is what the book is all about. 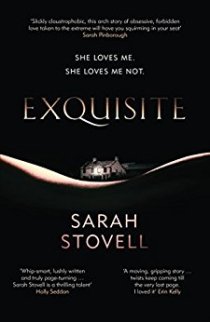 Bo Luxton has it all – a loving family, a beautiful home in the Lake District, and a clutch of bestselling books to her name.

Enter Alice Dark, an aspiring writer who is drifting through life, with a series of dead-end jobs and a freeloading boyfriend.

When they meet at a writers’ retreat, the chemistry is instant, and a sinister relationship develops … Or does it?

Breathlessly pacey, taut and terrifying, Exquisite is a startlingly original and unbalancing psychological thriller that will keep you guessing until the very last page.

I think like most other Orenda fans I was really excited to read this book. The cover is, as the title, exquisite. So dark and brooding that it draws you in. And the idea of a twisted relationship, kind of a la Single White Female really caught the imagination. So with all this anticipation and expectation before I even opened the front cover, did the story itself live up to it?

Well… honestly? Yes and no. I have found this a very difficult book to review if I am honest. There is no doubt that the writing is very strong, the descriptive narrative is brilliant, truly setting the scene and putting the reader into the heart of both Brighton and the Lake District where the book is primarily set. And the way in which Stovell captures the obsessiveness of the relationship between Bo and Alice is really effective, as is her knack for creating a sense of foreboding. You know something is going to go horribly wrong from the off, with snippets of telling dialogue from one of the two women, both of whom we are yet to meet and get to know. You also get an almost immediate sense of the unreliable narrator and at times you will find yourself doubting just what is happening.

But only at times. And this is where I began to struggle. I have to be perfectly honest here and admit that I had guessed very early on what the big hook of this novel was going to be and because of that it made it hard for me to see what I was probably meant to see. Yes, there are times when I did second guess myself, where I wondered if I had been double bluffed. There were moments where I was caught unawares, and events occurred where things were not quite as I thought they were. But I struggled to get behind either character, not always necessary in a book, but I usually have to feel something for one of them, even if it’s only anger.

One area the book does excel in however, is in challenging perception and perhaps even stereotype, which proved very effective in terms of creating the growing atmosphere and toxicity in the relationship between the Bo and Alice. And it also offers a very compelling look at the ideas of obsession and nature verses nurture upon a person’s psyche; just be aware that there are themes touched upon, not particularly graphically, which may still make some readers wince.

Towards the end the tension really started to ratchet up, true characters were revealed, and the final page provided, in my eyes at least, perhaps the most chilling moment of all. But for me the story wasn’t quite unique enough. Perhaps it was purely down to timing and if I’d read this on another day or week, then I’d have felt differently, and maybe I have read too many books in this vein of late, as for me this just wasn’t quite all that I was anticipating.

That said, I know I’m in the minority when it comes to this book and I genuinely do believe it will be a big hit for this summer. It is very competent writing and I would be intrigued to read more by the author as her narrative style is compelling. Don’t let my personal view influence you too much. I am but one blogger. As with all books you should read it and judge for yourselves, as we all want and find something different in a story – that is their unique gift to us all.

My thanks to publisher Orenda Books for an advance copy of Exquisite and to Anne Cater for inviting me onto the tour. It is available now in e-book and is released in paperback in the UK on 15th June.

Sarah Stovell was born in 1977 and spent most of her life in the Home Counties before a season working in a remote North Yorkshire youth hostel made her realise she was a northerner at heart. She now lives in Northumberland with her partner and two children and is a lecturer in Creative Writing at Lincoln University. Her debut psychological thriller, Exquisite, is set in the Lake District.

For more reviews and author features, why not check out some of the other fab blogs taking part in the blog tour. 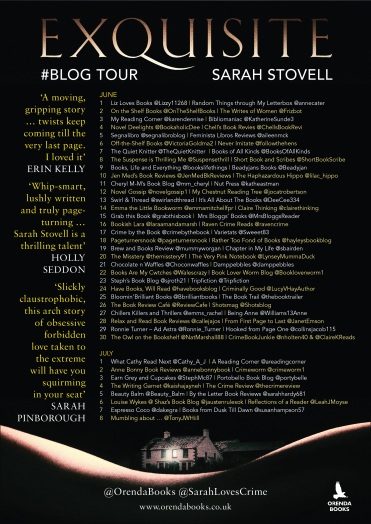