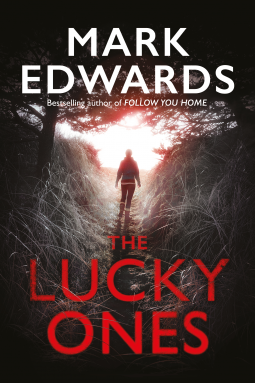 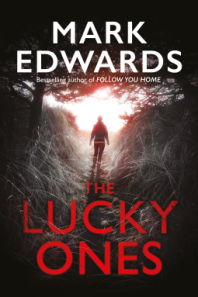 It was the happiest day of her life. Little did she know it was also the last.

When a woman’s body is found in the grounds of a ruined priory, Detective Imogen Evans realises she is dealing with a serial killer—a killer whose victims appear to die in a state of bliss, eyes open, smiles forever frozen on their faces.

A few miles away, single dad Ben Hofland believes his fortunes are changing at last. Forced to move back to the sleepy village where he grew up following the breakdown of his marriage, Ben finally finds work. What’s more, the bullies who have been terrorising his son, Ollie, disappear. For the first time in months, Ben feels lucky.

But he is unaware that someone is watching him and Ollie. Someone who wants nothing but happiness for Ben.

Now this is a book which combines two very intriguing things for me. Firstly you have the writing of Mark Edwards who certainly thrilled with his last book, The Devil’s Work, and secondly, intriguing for me at least, is that fact that this book is set in my home county of Shropshire. There is nothing I like more than being able to identify with places that books are set and Mr Edwards certainly paints the normally quiet county a very different colour with his new thriller, The Lucky Ones.

When Ben Hofland moves back to Telford from London following the breakup of his marriage, little can he know how much this is going to impact his life. Beyond the obvious challenges it brings to him and his son, Ollie, it also puts him in the sights of someone who wants only happiness for the people around them. Eternal happiness. And Detective Imogen Evans thought she had moved away from the rat race and the high profile murders when she moved to the sleepy county of Shropshire. Nothing could have prepared her for what she and her team were about to discover – a serial killer who will stop at nothing to complete their vision including targeting Imogen herself.

Now. Don’t get me wrong. I love my home county. It is beautiful, peaceful, idyllic even. So when I read that Mark Edwards was about to terrorise the county and bring death and destruction upon us, I was well up for reading it. What could he possibly write that would make sense in a county where the majority of the area is rural. Anything too violent would seem out of place – perhaps jarringly so – and potentially push the reader away. Thankfully he has been much more subtle than that, creating a tense and yet understated story which is totally in keeping with its setting.

When I say understated, do not for one moment think that this book doesn’t still deliver on thrills and tension because it absolutely does. But this is a cold and calculated killer who has been planning their kills for some time and while the act of murder in itself is brutal and unforgivable, in the murderers eyes there is a kind of twisted logic to what they are doing. And it does make a kind of sense after a fashion, the killer trying to provide an almost humane death to their victims. It causes confusion for the police and getting to the truth will not be easy.

In terms of characters, outside of the passages when we are treated to the perspective of the killer, a person who has very deep rooted issued which becomes clearer as the book goes on, the story mainly follows Ben as he navigates his new life back in Telford and Imogen as she investigates the murders. Both are very empathetic characters and I grew to like them a lot. There were times when I wanted to slap Ben out of his funk, still grieving as he was over the end of this marriage, but ultimately he was a good guy trying to make the best of a very tough situation. And Imogen was a strong and intelligent woman, someone who deserved a little bit of happiness.

As I said before, this is not your fast action thrill ride. Heck, if you tried that out here you’d soon find yourself stuck behind a tractor bouncing in your seat and willing it to move faster! But it still has a core of menace, those chilling moments when you can feel the noose tightening around Ben and Ollie; when you know that the events that occur are moving ever closer to Ben coming face to face with the killer. And in the meantime – well why not just sit back and enjoy the scenery. The author has done a stunning job of capturing the essence of the county in his writing. Perhaps being the scene of a body dump doesn’t place Wenlock Priory in the kindest light, but if you aren’t at least partly intrigued about coming to visit our wonderful county after this then you really don’t know what you are missing. I for one was inspired to get back out there and visit some places I haven’t been since my childhood, even some places I’ve never seen myself before. Brilliant writing.

My thanks to Thomas and Mercer and NetGalley for the advance copy of The Lucky Ones for review. The book is released on 15th June and is available at the following links.

3 thoughts on “Review: The Lucky Ones by Mark Edwards @mredwards #Shropshire #Telford”