Today I am delighted to be taking part in the blog tour for Hunting the Hangman by Howard Linskey. Now this is not your typical crime or thriller novel in that it is a fictionalised account of an actual event in World War II. I wasn’t really sure when I began reading this just how I would go about reviewing it, and in truth I am not entirely sure as I write this now, but before I start, here is what the book is all about. 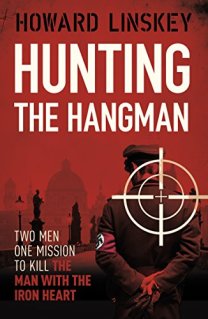 Bestselling author Howard Linskey’s fifteen year fascination with the assassination attempt on Reinhard Heydrich, the architect of the holocaust, has produced a meticulously researched, historically accurate thriller with a plot that echoes The Day of the Jackal and The Eagle has Landed.

2017 marks the 75th anniversary of the attack on a man so evil even fellow SS officers referred to him as the ‘Blond Beast’. In Prague he was known as the Hangman. Hitler, who called him ‘The Man with the Iron Heart’, considered Heydrich to be his heir, and entrusted him with the implementation of the ‘Final Solution’ to the Jewish question: the systematic murder of eleven million people.

In 1942 two men were trained by the British SOE to parachute back into their native Czech territory to kill the man ruling their homeland. Jan Kubis and Josef Gabcik risked everything for their country. Their attempt on Reinhard Heydrich’s life was one of the single most dramatic events of the Second World War, with horrific consequences for thousands of innocent people.

Hunting the Hangman is a tale of courage, resilience and betrayal with a devastating finale. Based on true events, the story reads like a classic World War Two thriller and is the subject of two big-budget Hollywood films that coincide with the anniversary of Operation Anthropoid.

What can I say? There are no real words to describe my feelings after reading this, at least none that will do it justice. I like a good thriller, one in which there is tension and threat and a true sense of good verses evil. Where there is a strong heroic figure that I can root for pitted against and enemy who deserves to get his or her comeuppance. It does not have to end favourably although, in truth, with most modern fiction, it does. And with Hunting the Hangman I got all of this and more, packaged into a beautifully told story which kept me sheltered to some extent from the undeniable and awfully devastating truth – that this is not wholly a work of fiction. The acts upon which this book are base really happened.

Now I don’t think that I am giving away spoilers when I say that Reinhard Heydrich was a truly evil man who probably deserved his fate. If you want to know what that ultimate fate was you can read it on wikipedia or in any of a number of good history books. He was merciless in his pursuit of power, even to the detriment of his fellow countrymen at times, and revelled in the use of torture upon those he considered traitors. The traitors, or those to whom he reserved the greatest hatred in this period of his life? The Czechoslovakians, enemies of Germany by virtue of simply following the wrong religion or not be Germanic enough. He is a sickening character and yetsomehow Linskey   manages to humanise him, making account of his family life and his love for his father’s music. To that end he makes him out to be a man driven by greed and ambition rather than simply a legendary murderer, one of the most feared men in the Reich.

It was a strange feeling I had in reading about Heydrich. You could almost applaud his cunning, but nerve forgive his actions or those which he had planned but never got the chance to carry out. So perhaps, in the end, it is fitting that his death was more of a wimper than a bang. So drawn out and potentially avoidable as to almost be laughable. However the after effects of his assassination were not laughable in any sense and it is this element which perhaps sickened the most. The clinical nature with which retribution was carried out almost arbitrarily against the citizens of a small Czech village, just because a traitor had once been found there. And the further atrocities which were carried out in a bid to unearth the location of the two men who attacked Heydrich really do make the stomach turn. They are not told here in a gratuitous fashion, more a statement of fact. Not dismissive but in some way shielding the reader and yet still exposing them to an undeniable truth.

And what of the two men brought back to their homeland in order to carry out the most audacious attack ever attempted on the Nazis? Jan Kubiš and Jozef Gabčík were two people I was drawn to from the very start. Both passionate about their jobs, their mission and more importantly their country I felt drawn to them immediately. As their story developed I felt awful knowing that in taking on this mission they were facing almost certain death. Linskey again did a great job of making them live. Kubiš’s exuberance and almost jealousy when he thought he was being passed over for the mission, his base excitement at being able to return home to see his love, Anna. And Gabčík. Much harder to like at first as he was the more sullen and argumentative of the two and yet this made him strangely endearing too. As he returned to Prague and for the first time in his life experienced love, it made the facts of what was to pass even harder to read.

Yes. This is fictionalised and so the conversations and even some of the action is decorated by artistic licence and supposition. However the book does not simplify, glorify, sensationalise or trivialise the story in any way. It is simply a mass of painstaking research which has been crafted into a beautifully emotive piece of writing. I have tears in my eyes now as I finish writing this review. That I actually read the final pages on VE Day, along with the final words in which Howard Linskey reveals the final fates of some of the minor players in the story, perhaps made it even more poignant. The sacrifices made by many men and women in order to protect the masses should never be forgotten. Yes, in essence, this is the story of two men sent to kill one, but it is also so much more than that. When you read it you will understand just how many people were willing to sacrifice themselves that this mission may succeed and how many unwitting victims there were too as a result. This is their story too.

Now this may seem a little out of place but I truly believe this is a book, a history, that everyone should read and for that reason I’m also awarding it my Red Hot Read badge. I don’t give this lightly but this book truly moved me.

My thanks to Publisher No Exit Press for providing a copy of Hunting the Hangman for review. It is available from 25th May and can be purchased from the following links: 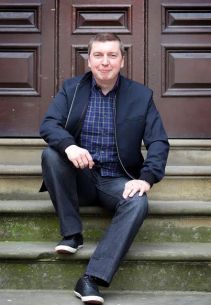 Howard Linskey is the author of three novels in the David Blake crime series published by No Exit Press, The Drop, The Damage and The Dead. Harry Potter producer, David Barron optioned a TV adaptation of The Drop, which was voted one of the Top Five Thrillers of the Year by The Times. The Damage was voted one of The Times’ Top Summer Reads. He is also the author of No Name Lane, Behind Dead Eyes and The Search, the first three books in a crime series set in the north east of England featuring journalists Tom Carney & Helen Norton, published by Penguin. His latest book, Hunting the Hangman, is a historical thriller about the assassination of Reinhard Heydrich in Prague during WW2.

Originally from Ferryhill in County Durham, he now lives in Hertfordshire with his wife Alison and daughter Erin.