It is my great pleasure to be one of today’s stops on the blog tour for Block 46 by Johana Gustawsson. My thanks to Anne Cater and Karen Sullivan for inviting me to join the tour. Yet another stunning read from Orenda Books and you can read my thoughts on it in just a moment after I share the all important booky bits.

Falkenberg, Sweden. The mutilated body of talented young jewellery designer, Linnea Blix, is found in a snow-swept marina. Hampstead Heath, London. The body of a young boy is discovered with similar wounds to Linnea’s.

Buchenwald Concentration Camp, 1944. In the midst of the hell of the Holocaust, Erich Hebner will do anything to see himself as a human again.

Are the two murders the work of a serial killer, and how are they connected to shocking events at Buchenwald? Emily Roy, a profiler on loan to Scotland Yard from the Canadian Royal Mounted Police, joins up with Linnea’s friend, French true-crime writer Alexis Castells, to investigate the puzzling case. They travel between Sweden and London, and then deep into the past, as a startling and terrifying connection comes to light.

Plumbing the darkness and the horrific evidence of the nature of evil, Block 46 is a multi-layered, sweeping and evocative thriller that heralds a stunning new voice in French Noir.

Wow. This book. As dark as this is at times,  it is also so beautifully crafted that it is one of those I will remember for some time.

The truth is though, that I am not quite sure how to describe my feelings about this book. It is, in essence, a murder investigation. When Linnea Blix fails to show for the grand unveiling of her new jewellery collection, her friends and her partner are understandably worried. And when her body is discovered in Sweden, her death bearing the all hallmarks of another case currently being investigated in London, it brings her best friend, writer Alexis Castells, and profiler Emily Roy together in a bid to uncover her killer. The result of this pairing is as intriguing as it is exciting. Both women are determined, driven by past demons, and nothing will stop them in the pursuit of the truth.

And yet… to brand it a mere murder investigation would be to belie the truth of the many layers which feed into this investigation. Firstly the many varied characters which the story leads us to – from Linnea’s ex-husband, to the police who are investigating the crimes in Sweden –  and beyond that the twisted and dark thread interwoven throughout – the origins of the murderer, which the reader is constantly drawn back to. Much of the story is told in the present day, following the investigators as they piece together the evidence, yet there are moments, brief passages, when we see into the killers mind. When we are treated to the excitement he gets from the hunt and the sheer joy of the kill. It is a twisted and dangerous mind, totally devoid of emotion or empathy for the victims and the detachment he has from his prey is clinical and chilling.

Beyond that there are also passages which delve back into a very dark period in history. To one of the many interment camps of the Second World War, where the abhorrent treatment of prisoners, the experimentation and the disdain shown to the them by virtue of their beliefs, be they political or religious, is spelt out in clear and graphic, and yet not quite gratuitous terms. It is hard at first to know where these sections are leading, but as our protagonist in these chapters, Erich Hebner, is taken to the eponymous Block 46, the disturbing truth begins to become clear. These passages are hard to read, if only because, despite being fiction, you know that this is exactly the treatment that people were subjected to. Starvation and abuse, where the violence meted against innocent victims transcends any moral or ethical boundaries applied simply to age, race or religion. Put simply, it was an act of pure evil.

The characterisations in this novel are superb. I found myself drawn to both Alexis and Emily, rooting for them to succeed in their search for very different reasons. Alexis is warm and endearing, easily bringing about a calm in those around her and eliciting a kind of trust in others, including the reader. Emily is almost the opposite. Straight talking and clinical at times, she is a no nonsense character that you cannot help but respect. The Detectives surrounding the case, both the older and more measured Bergström and the younger and certainly more cocksure Olofsson also appear wholly authentic, each holding their own certain kind of appeal. And the identity of the killer remains very cleverly hidden until the end, no mean feat to accomplish in a world full of armchair detectives.

The clues are subtle, their reveal gradual. But then this suits the pace of the book. This is not your heart pounding fast paced thriller but this doesn’t mean that it doesn’t make you nervous. There are moments that will leave you reeling, including one real edge of the seat moment near the end, but the book really doesn’t need to throw in the slap in the face shocks. The unnerving truth of the extent of the murders will be more than enough to keep your mind churning, as will the awful treatment of the prisoners in the concentration camp, and the suspense which the author creates from the very beginning is enough to draw the reader in and keep them hooked until the very end. And the settings, Sweden, London and Nazi Germany, are all so skilfully created, almost characters in their own right, that I felt uncomfortably part of the action at times, almost a voyeur of some very atrocious acts, the like of which were sadly everyday occurrences once and which the passage of time will not, and should not, erase from our minds.

My compliments also on a flawless translation by Maxim Jakubowski.

A dark and at times unnervingly real 5 stars from me.

Because of the power of this book, the way in which it can engage and disturb in equal measure. I’m going to award it my Red Hot Read award. I really do think this is going to be a massive hit for 2017.

My thanks to publisher Orenda Books for the advance copy of Block 46 for review. It is released in paperback tomorrow and available to purchase from the following retailers:

Born in 1978 in Marseille and with a degree in political science, Johana Gustawsson has worked as a journalist for the French press and television. She married a Swede and now lives in London. She was the co-author of a bestseller, On se retrouvera, published by Fayard Noir in France, whose television adaptation drew over 7 million viewers in June 2015. She is working on the next book in the Roy & Castells series.

Make sure to check out the other fabulous blogs taking part in the tour for more features and reviews. 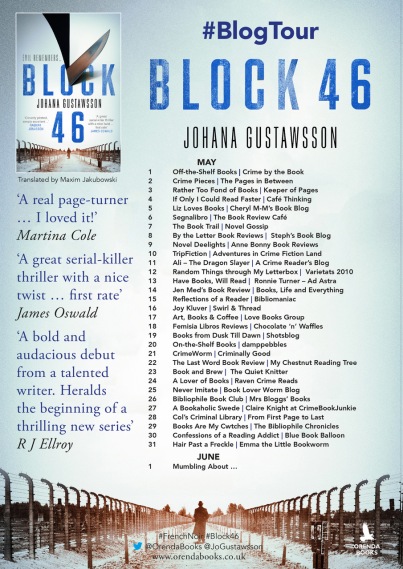