O. M. G. The day has finally arrived. Today is the day that Dead Souls, the sixth Kim Stone masterpiece is set free and I GET TO BE ONE OF THE TWO BLOGGERS TO OPEN THE BLOG TOUR!!! Whoop whoop.

You’d be forgiven for thinking I might be a bit happy about that. But you’d be totally wrong. I’m actually a lot happy. A massive Happy Publication day to Angie and Bookouture. I’m pretty certain you’ll be having a blast and you truly deserve every bit of happiness today. Because this book, ladies and gents, is epic!!!

I’ll share my review with you in a moment, but first up here are those all important bookie bits. 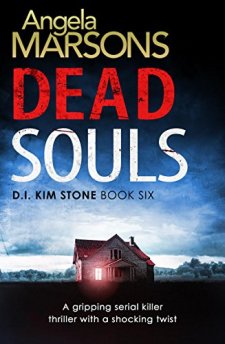 The truth was dead and buried…until now.

When a collection of human bones is unearthed during a routine archaeological dig, a Black Country field suddenly becomes a complex crime scene for Detective Kim Stone.

As the bones are sorted, it becomes clear that the grave contains more than one victim. The bodies hint at unimaginable horror, bearing the markings of bullet holes and animal traps.

Forced to work alongside Detective Travis, with whom she shares a troubled past, Kim begins to uncover a dark secretive relationship between the families who own the land in which the bodies were found.

But while Kim is immersed in one of the most complicated investigations she’s ever led, her team are caught up in a spate of sickening hate crimes. Kim is close to revealing the truth behind the murders, yet soon finds one of her own is in jeopardy – and the clock is ticking. Can she solve the case and save them from grave danger – before it’s too late?

An addictive, sinister crime thriller that will have readers on the edge of their seat.

So. Let’s be honest. If there is a new Angela Marsons book out, then you know I’m going to be somewhere reading it. I have pretty well devoured every book she has written since I finally picked up Silent Scream a little over a year ago. February 6th 2016 to be exact. I hoofed through the whole thing in one night and pretty much the only thing that has changed since then is the length of my hair and the content of the books I am reading. Because when I picked up Dead Souls there was no way I was going to stop reading until I had finished. And believe me when I say that it’s not just a me thing – it really is that good.

Now for fans of the Kim Stone series, you will know that she and her team have found themselves in some pretty tense and dangerous situations over the past couple of years. They are no strangers to grizzly deaths or hair raising investigations and, as you would expect with a title like Dead Souls, you can rest assured that this book is no different.

Actually. That’s a lie. This is different. This book has a much darker tone to it overall, not so much so that it would put the ardent Kim Stone follower off, turn them away with graphic violence or unnecessary gore, but it is a very emotive and disturbing subject matter and there are elements which need to be handled in a sensitive and yet honest way. Angela Marsons tackles this with her usual flair, not trivialising the violence or the motives behind the violence and not playing it for shock value alone either. But shock it will.

From the get go there is an underlying menace, a sense that there is more than the eye can see. The very first act within the book is one which could be a trigger for some and one which many can probably identify with; an overwhelming sense of despair where there seems only one way out. Now this scene may be upsetting, it certainly sets the tone for the whole novel, but it is necessary for reasons that will become apparent as you read on. I won’t say any more than that as this is a journey which the reader needs to go on for themselves.

Now aside from all the darkness, there are the usual moments of humour that we have come to associate with this series. Dr A for example is a real hoot, particularly as she delights in taunting Travis much to Kim’s amusement. And even more that that, Bryant finds himself paired up with Dawson. You couldn’t put two more different people together, well unless you count Kim and Bryant but there is a strange synergy there that just works. As for Bryant and Dawson? Well there are moments between them that did make me chuckle. But beneath it all they are investigating a very disturbing crime and the compassion, frustration and determination which is inherent in the pair of them seeps from every page. They may have a very different approach to one another, but ultimately they both want the same thing – justice.

Marsons also manages to throw the team off kilter in this book, adding another, slightly less obvious, layer of conflict to the novel. Kim finds herself paired up with DI Travis, the man who seems to be her nemesis. This in itself is not the conflict I’m referring to. Yes, they rub each other up the wrong way, but this adds as much humour as it does tension at times. It is more the impact that Kim being separated from her team has on all of them. They have a spark when they are together, but that one little chink, that one small gap, and it puts everything on the line, especially for one of them.

What I really enjoyed about the book was that not only did we come to learn the reasons behind Kim’s problems with Travis, which were surprising to say the least, but that we got to see more of Stacey. She really comes into her own in Dead Souls. Previously she has been the one left behind, sat in the comfort of the station hiding behind her computer screen. Now she really steps up, making some serious mistakes in the process but ones which endear her to me even more than her wonderful Black Country accent. Her story is an emotive one and the case has very personal undertones for her. You cannot help but like this strong, determined, perhaps a little unsure Detective.

Angela Marsons has once again proven how skilled she is in creating tension. I could not look away from the book once I had started reading. I kind of had a sense of where it was heading, the harsh and brutal reality building with every page turn, as did the sense of dread. And from about 80% in I could feel my pulse rate rising, could feel my body tense as I willed the team to find the truth and to prevent what seemed almost inevitable. I swear that my heart was in my throat, or as good as. That is the power of this wonderful lady’s writing. One of the only people to make me cry she also takes me right to the edge of my very last nerve. Both from excitement and tension. Every. Flipping. Time.

This is not a story for the faint-hearted or for the easily offended. It is a very timely and perhaps sociologically relevant story, given all that has been happening across the globe. There is a grotesque realism to the way in which some of the story unfolds, but I mean that in a genuinely positive way. There is such passion in the way the subject is written that you can truly feel every bit of emotional energy that it clearly took to put these words on the page. In her letter at the end of the book Angela Marsons speaks of how difficult this book was to write, how parts of the research disgusted her, and I can fully believe it. To take such a vile subject and characters, such vitriol, and make it breathe… To completely avoid glorification of events and yet create such authenticity in the actions of the many hateful perpetrators in the book… To fully immerse yourself in the writing while keeping a safe and sane emotional distance from the hatred. That takes real skill and nerve. Ms Marsons has that by the bucket load.

This book is going to be a hit – no doubt about it. Everything you could expect from a Kim Stone book and just that little something more. Best. One. Ever… (so far 😉 )

Dark, troubled and tension filled 5 stars. Big fat ones. Like massive. (Can I change my scoring system?) Ah well… I refuse to make them smaller 😉

And you know what else? I’m awarding this book my first ever #RedHotRead rating. This is a new recognition award for books which really are, in my opinion, a cut above and which should be in everyone’s tbr list.

My absolute thanks to Netgalley and publishers Bookouture for providing the advance copy of Dead Souls for review. I would have reviewed it even if I had to buy it myself. Which I have also done. Just so you know…

Speaking of which, you too can purchase this wonderful book from the following retailers. What are you waiting for?

Angela lives in the heart of the Black Country with her partner, bouncy puppy and potty mouthed parrot.

It has taken many novels to find that one character who just refused to go away. And so D.I. Kim Stone was born.  The D.I. Kim Stone series has now sold over 2 million copies.

Don’t just take my word for how fabulous this book is. Make sure to stop by the rest of the wonderful blogs taking part in this tour including my tour buddy for today, Ana at This Chick Reads. 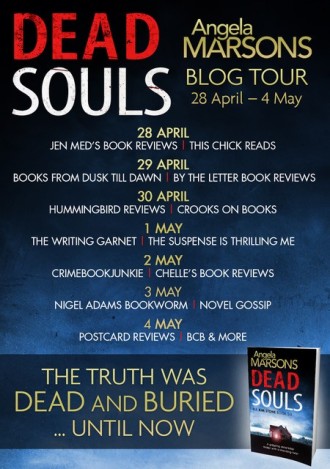