It is my great pleasure to be one of today’s stops on the blog tour for Lie to Me, the new thriller from Jess Ryder and Bookouture. I’ll be sharing my review with you in a moment, but for now, here is what the book is all about.

How can you tell the truth… if all you’ve ever known is a lie?

Three minutes. That’s all it takes for Meredith’s entire world to fall apart when she watches the videotape of her four-year-old self with Becca, the mother who abandoned her.

Meredith can’t believe what her eyes have seen. Yet what if her memory has locked away the painful reality of her childhood? Can there be any truth in the strange and dangerous story her mother forced her to tell on camera?

The search for answers leads Meredith to Darkwater Pool, the scene of the murder of a young woman, Cara, over 30 years ago. What could possibly be the link between her mother and the victim?

To find the truth Meredith must search through a past that is not her own. The problem is, she’s not the only one looking…

When Bookouture announce a new book, particularly a crime or thriller type of novel, I am always intrigued. And so when Lie To Me was first revealed I was straight in there. The blurb sounded interesting, mysterious even, and that is exactly the kind of book which appeals to me. Who are Becca and Meredith and just what is on the videotape which changes everything?

Well… if you want to know that then I’m not going to tell you. I think it’s too much of a spoiler and you really need to read for yourself. Needless to say, what is contained on the tape puts Meredith into a spin, if only because her father was so against her watching it to begin with. Although she turns to her friend Eliot, a former lover who works for the police, for help, she feels frustrated by an apparent lack of information or action and really isn’t getting any closer to the one thing that Meredith really wants. To find out what has happened to her mother.

Now there are many characters throughout the story, and it is told from the points of view of three of them, Meredith, Cara and Jay, Cara’s boyfriend. The chapters told in Cara’s voice are set in the past, in the weeks and months leading up to her murder, whereas the Meredith and Jay chapters are both set in present day. In spite of that, switching between three characters, it is very easy to keep up with what is going on and the voices are very distinct. The characters are also very believable but I’m not entirely sure that I particularly liked any of them much, even Meredith. Yes she was drawn into something not of her making but she also made matters worse by not leaving the police to it. But then there wouldn’t be much of a story in that now, would there?

Both Meredith and Jay have a vested interest in discovering the truth of what happened on that fateful night all those years ago, although for two very different reasons. Although their method of investigation or suspicion takes them down two very different paths, they still interact with the same small cast of characters and are ultimately destined to come together in one final dramatic showdown.

In terms of the tension, this perhaps wasn’t as edge of the seat as I might have liked or expected. There were opportune moments throughout the story for the action to be balanced on more of a knife edge but for me this was more like the melting of a candle. A slow burning secret at the centre, away from which slid layer upon layer of lies until all that was left was the truth. Also, a bit like a candle, I kind of knew what it was I would be left with by the end but the author did manage to throw in one angle that I wasn’t quite expecting.

For me the epilogue was perhaps unnecessary, but that could just be personal preference. Yes it tied up a loose end, but perhaps that was a mystery that would have been best left open, with the promise of discovery being part of the joy of Meredith’s journey. I know that if that had been the case though, someone somewhere wouldn’t have liked that either, so like I say, it’s just a matter of taste. I still enjoyed this book and was engaged enough by the characters, the plot and the style of writing that I’ll definitely be looking for more by Jess Ryder in the future.

My thanks to Bookouture and Netgalley for the advance copy of Lie To Me for review. The book was released on 19th April and is available to purchase from the following retailers.

After many years working in children’s media, she has recently embarked on a life of crime.  Writing, that is.   So she’s very excited about the publication of her debut thriller Lie to Me.  Her other big love is making pots.

Be sure to check out all the other brilliant blogs taking part in the tour. 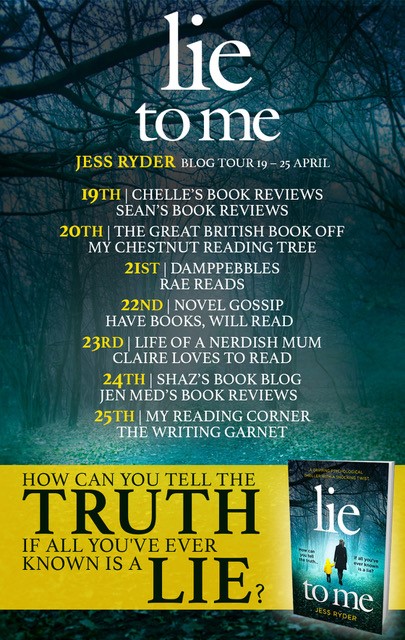 One thought on “#BlogTour Review: Lie To Me by Jess Ryder (@jessryderauthor; @Bookouture)”

Today I wish a happy publication day to @fionacumminsauthor as When I Was Ten is out now. @panmacmillan
Thank you to @fmcmassociates and @michaeljbooks for today’s #gifted #bookpost - a paperback copy of Because of You by @dawnfrenchofficial. Really looking forward to being part of the blog tour which starts in a couple of weeks time.
Today Mandie shares her thoughts on The Whispers by Heidi Perks.
Thank you to @caroline_writes for my comp win - a #gifted copy of Flesh & Blood, the next book in the DI Amy Winter series. Can’t wait to read it.
Today I’m sharing my thoughts on The Source, the brand new thriller from Sarah Sultoon and @orendabooks
This week Mandie caught up on the latest book in the DCI Ryan series by @ljross_author - Cuthbert’s Way