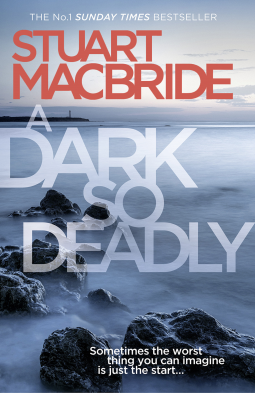 Now if there is one thing guaranteed to get me to stop what I’m doing, or a least stop reading what I’m reading, then its a new Stuart MacBride book. One of my ‘drop everything for’ authors. There are only four of them. It’s quite an elite group. So when I heard (a year ago) that there was a new book on the way, I obviously pre-ordered.  And when I say a year ago I am being very literal as I’ve had this beauty on order since 17th April 2016. Here’s the proof… 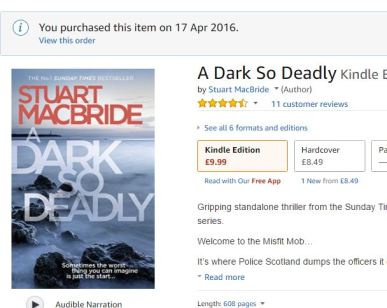 Of course back then, it was just called Stuart MacBride 3. I could only hope that it was going to be another linked to the Ash Henderson series but alas no. Well. Sort of no. It is set in Oldcastle, the stomping ground of Ash Henderson, and it does make reference to the case which made Ash so infamous back in Birthday’s For the Dead. And while I say alas, it is only because I miss Mr Henderson, but this book more than made up for his absence. But enough of my blathering, here is what you want to know – what this book is all about. 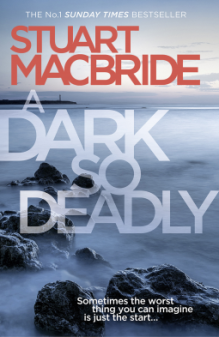 Welcome to the Misfit Mob…

It’s where Police Scotland dumps the officers it can’t get rid of, but wants to: the outcasts, the troublemakers, the compromised. Officers like DC Callum MacGregor, lumbered with all the boring go-nowhere cases. So when an ancient mummy turns up at the Oldcastle tip, it’s his job to find out which museum it’s been stolen from.

But then Callum uncovers links between his ancient corpse and three missing young men, and life starts to get a lot more interesting. O Division’s Major Investigation Teams already have more cases than they can cope with, so, against everyone’s better judgement, the Misfit Mob are just going to have to manage this one on their own.

No one expects them to succeed, but right now they’re the only thing standing between the killer’s victims and a slow, lingering death. The question is, can they prove everyone wrong before he strikes again?

Oh lordy. How do I even begin to write this review? As I sit here I have a big smile on my face just thinking about this book. Now don’t get me wrong. This is a very serious subject. People are being abducted and murdered all over Oldcastle, a place which has already seen more than its fair share of death and tragedy. And they are being done for in a very, very gruesome, if somewhat inventive way. And with part of the team, the ‘Misfit Mob’ being diverted to look into dismembered body parts, it is left to the ultimate misfit, DC Callum MacGregor, to find out the source of the mummified remains found at the tip.

Now the fun begins even before the mummified remains are found and what happens in the opening sequence involving Callum pretty well sums up how things are going to go for the poor chap throughout the rest of the novel. Talk about beaten up. He is manhandled in his privates, bitten and beaten; just a few of the  many indignities meted against him. On top of this he suffers relationship woes and is under investigation for cocking up a crime scene. So being dumped with the mummy is just the sign of another day in paradise. Or… not.

Now you can’t help but like Callum. He is the ultimate put upon Detective. If something can go wrong then it will go wrong and yet he doesn’t give up. He bears the brunt of jibes and mistrust from his colleagues and still he perseveres. He has a very troubled past, as all good fictional Detectives should have, one which is brought to a head (pun absolutely intended and when you read it you’ll understand why) during the investigation, and he is a very dangerous man to be around, if only because he is like a homing beacon to every available nutter with every mode of attack possible. He is almost a complete parody of what a fictional Detective must be. But then wait a moment…

A Dark So Deadly is exactly that. Or at least that is how it read to me. A parody of everything that makes up crime genre fiction, a play on every trope, and especially of the kind of book that Mr MacBride is synonymous with writing. Callum is like an over exaggerated and yet amazingly concise version of Logan McRae. You have your over the top Matriarch with a sweetie obsession in Mother. The book also includes a dying Detective who takes every opportunity to knock Callum, DS McAdams, who is currently writing his magnum opus, his wondrous work of fiction that will define his career and catalogue his life. He even spends half of his time talking in the style of a narrator and a good proportion of the rest creating haiku. He discusses practically everything in terms of a literary technique or criticism and then dismissing summary narrative used by his colleagues. When he hands over his manuscript as his final gift to Callum there is even a joke about how long it is, a mere ‘one hundred and ninety-four thousand, five hunderd and twenty-eight words’. Quite fitting given that this book itself is some 608 pages long. Now while the McRae books have been getting progressively longer, I’m pretty sure this is the longest book yet.

Do not let that put you off. It doesn’t feel long. It feels right. Everything about this book does. It is like a well written, sometimes exciting, often humorous in-joke. Even down to the tip of the hat to the author’s own love of the Arbroath Smokie. Again, when you read the book you’ll understand.

If you are looking for a hard edged, hard hitting Detective novel a la the darker Ash Henderson novels, then this so isn’t it. Don’t get me wrong, the subject matter at times is pretty grim, but none of it felt like it was handled in a very gratuitous or dark way. There a moments of absolute tension, but they seem to be softened by an almost comedic edge, at least in the scenes involving Callum. And there are totally the kinds of scenes one would expect from Mr MacBride, when the victim is waiting to accept their fate, when they are beyond hope and lapsing into despair. When the tone turns very serious and you are forced to remember that there is a very nasty killer out there somewhere, one who may just have the upper hand on the police.

To me that made it the perfect blend – when the story got too dark you are treated to a lighter interlude, especially the relationship between Callum and his police partner, newbie to the Misfit Mob with her own problems and character flaws, DC Franklin. But when the tongue in cheek threatens to take over you are treated to a moment in the darkness, to the mental torment of the killer’s latest victim-in-waiting.

So. Did I miss Logan and Ash in the end? Well, maybe just a little. They, to me, are iconic characters and I’m always going to be ready to read more. But I was more than delighted to take this detour back to Oldcastle and I wouldn’t mind seeing a little more from the Misfit Mob. They may be a little thin on the ground right now but I can’t help thinking there will always be a new screw up somewhere in Mr MacBride’s literary Police force just waiting on that transfer to Oldcastle.

Roll on the 25th as I will be attending the Liverpool launch of the book and bagging myself a signed copy. Oh yes… No maniacal laughing over here. Not at all.

Happy publication day to you Sir. 😉

My thanks to publishers Harper Collins and NetGalley for the advance copy of A Dark So Deadly for review. It is available to purchase now from the following retailers. And you must. You really, really must.

You can follow the author at the following sites:

7 thoughts on “Review: A Dark So Deadly by Stuart MacBride (@StuartMacBride)”

Busy month but quite impressed to have read 15 books and one short story collection.
Today @mandie163.mg shares her thoughts on Fatal Isles by Maria Adolfsson.
This week @mandie163.mg shared her thoughts on the fourth Lori Anderson novel by @crimethrillgirl, Deep Dark Night.
This week on the blog I reviewed Innocent by @erinkinsleyauthor
Absolutely delighted to join the #coverreveal for the brand new standalone thriller from Daniel Cole - author of the brilliant Ragdoll series. I loved those books so really excited to see what he has to offer is with #Mimic - being published by @TrapezeBooks on 19th August 2021.
I'm delighted to join the #coverreveal for the latest book by @msameliahenley - The Art of Loving You. it's out on the 22nd July and you can order a copy at the following link: https://buff.ly/3bzTw5Y