Continuing my countdown to the release of Angela Marsons’ Dead Souls, today I take a look back to book 3 in the Kim Stone series, Lost Girls. Possibly the most emotionally powerful of the books so far, Kim faces a race against time to save two young girls who have been abducted by someone willing to play a deadly game. Before I share my refreshed review with you all, here is what the book is all about.

Two girls go missing. Only one will return.

The couple that offers the highest amount will see their daughter again. The losing couple will not. Make no mistake. One child will die.

When nine-year-old best friends Charlie and Amy disappear, two families are plunged into a living nightmare. A text message confirms the unthinkable; that the girls are the victims of a terrifying kidnapping.

And when a second text message pits the two families against each other for the life of their children, the clock starts ticking for D.I. Kim Stone and the squad.

Seemingly outwitted at every turn, as they uncover a trail of bodies, Stone realises that these ruthless killers might be the most deadly she has ever faced. And that their chances of bringing the girls home alive, are getting smaller by the hour…

Untangling a dark web of secrets from the families’ past might hold the key to solving this case. But can Kim stay alive long enough to do so? Or will someone’s child pay the ultimate price?

So – have my feelings about this book changed much over time? Not really. Do I still believe this to be one of the stand out books from the series. Definitely. And here is why…

Imagine the pain of knowing that your child has been abducted. Knowing that she and her best friend are alone, scared and in grave danger which you can do nothing about. Now imagine being locked in a bidding war with your own best friends in order to secure your child’s safe release. Would you be willing to pay any price to get your daughter back, even if that meant that the other child may never come home?

This is the dilemma facing the Timmins and Hanson families in Lost Girls, the third instalment of the Kim Stone series. Although outside of her area of expertise, Kim is specifically requested as Officer in Charge by one of the parents, and although not everyone agrees with this decision, she demands to take on the case, bringing to it her usual dogged desire for justice. Her passion is heightened by the fact that the case involves children, an emotional trigger for her which is not helped by the appearance of a face from her past. Aided by her trusted team, and a few new characters, Kim sets about investigating the disappearance of the girls, including looking back over a similar case from the previous year, one which did not have a favourable outcome. She is determined that she will not fail and will bring both girls back alive. Is there anyone brave or foolish enough to try and prove her wrong?

Lost Girls is an emotional roller coaster of a book. Taking us swiftly between the point of view of the investigating team, the perpetrators of the kidnapping which includes a very violent man with no discernible conscience, and the two scared young girls, Marsons creates a brilliantly fast paced story. It is neither too gratuitous nor too simplified in terms of violence, and yet it maintains the tension throughout, keeping the reader guessing as to just who the mysterious suspects may be.

The creation of conflict between the parents, who start the story united in their despair only to be torn apart by the unsub’s cruel games, as well as the limited tolerance of Kim for the behaviour analyst and negotiator that she feels are foisted upon her, ring true to both the characters and the story. Bryant remains on hand to challenge Kim when the tension gets so high that she looks set to unravel, and this shows another aspect of their friendship, extremely well observed in terms of him being the only person who Kim would likely listen to, and who is able to get her back on track (with a little help from her new furry best friend). This is one heck of a powerful story, one which will tug at your heartstrings, and you can feel everyone’s emotional reservoir taken to the point of flooding and beyond. You will feel for the parents with their impossible decision and when we meet the kidnappers former child victim, you will share her despair and guilt over not being able to save her friend.

The descriptions of the area and the depiction of gang life inside the dodgy housing estates of the Black Country provide a side story which allows Dawson his moment in the spotlight, and the overall story gives you a little more insight into Kim’s past, one which we already knew was painful and traumatic. I really love Marsons’ writing, partly because I know the areas she describes so well (I will admit having a little smile to myself as I drove past the Pure Gym by the Merry Hill) but also because it is so accessible and absorbing; the story flows well, taking the reader along for a fast paced and yet very bumpy ride. And I like the characters that she has created, the attention to detail in describing their own peculiarities and flaws.

I do admit, that while Kim Stone may be a little prickly and lacking in people skills, after three books this is a character that you cannot help but love and respect. What I really like though is that there is no sense of Kim being a character written simply to be the ‘tough woman in a man’s world’ which can be all too prevalent and easy to slip into when trying to write a strong female character. It is purely that this is how she is, no apologies, just a character who is unable or willing to change and doesn’t give a damn who knows it. Sometimes that is enough, that there is no other motivation to be the best other than it is what she wants to be, and for these books at least, it most certainly is just that.

An emotive and heart-stopping 5 stars.

Lost Girls is the third book in the Kim Stone series and is available to buy from the following retailers.

Angela lives in the heart of the Black Country with her partner, bouncy Labrador and potty mouthed parrot.

It has taken many novels to find that one character who just refused to go away. And so D.I. Kim Stone was born.

You can find details of all of Angela Marsons’ books at her Amazon author page here. The other books in the Kim Stone series are Silent Scream, Evil Games, Play Dead and Bloodlines. 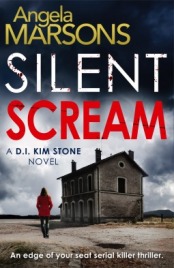 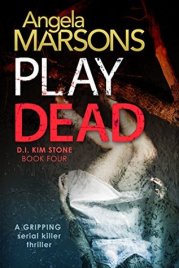 You can preorder Dead Souls which is released on 28th April, from Amazon UK and US.

Keep an eye out for the Dead Souls blog tour at the end of the month. I may be a little bit excited about this one.