Today I am delighted to be one of the stops on the blog tour for The Lost Children, the first book in the Detective Lucy Harwin series by Helen Phifer. I’ll be sharing my review with you in a moment but first, here’s what it’s all about.

Lizzy pulled the covers over her head. Then she realised what was being dragged behind the person with the torch. She rammed her fist into her mouth to stop herself from screaming…

For decades, The Moore Asylum was home to the forgotten children of Brooklyn Bay. But ever since a scandal forced its closure, the abandoned building has cast an imposing shadow. Until now – when an elderly man is found dead, his body strapped to an ancient gurney…

Detective Lucy Harwin, still reeling from a previous case that ended in the devastating murder of a mother and her child, finds herself on the trail of a killer ruthlessly fixated on avenging the asylum’s wrongs.

What disturbing secrets lie within the asylum’s walls? Together with her partner Detective Mattie Jackson, Lucy begins to unearth its terrible history, and the horrors endured by the vulnerable children.

As the attacks escalate and a woman is murdered on her own doorstep, Lucy is forced into a terrifying game of cat and mouse with a twisted individual. But can Lucy stop a murderer with nothing left to lose?

I don’t think that I’ve particularly hidden that I am a fan of Bookouture. They have released some of my favourite books in the past few years and each and every time they announce a new book, I sit up and take note. This is especially true when it comes to anything crime related. I have somewhat of a thing for crime or thriller books. You may have noticed. So when they announced that they were releasing a new series of books by Helen Phifer, I was intrigued and straight onto the pre-order. Likewise I was right on board when the opportunity came to read and review the book. So, in a genre already dominated by strong female protagonists, a good number of them coming from the Bookouture stable, could this new Detective, Lucy Harwin, hold her own?

The answer is simply, yes. She can. She is a really interesting character. Just returning to work after a break which was forced on her following a particularly harrowing case which went south, she is immediately drawn into a murder investigation which will test her nerve and prove whether she really is ready to return to work. With her personal life a bit of a mess (she’s a divorcee whose seems unable to do anything right in the eyes of her teenage daughter) Lucy lives for work. Her work partnership with Detective Mattie Jackson was brilliantly scripted; a perfect balance of camaraderie and flirtation with the pair skirting around the clear chemistry between them. This is definitely a pairing to watch and once which I will be interested to see develop in the future books.

As for the case. Well, when your first body is found left to rot in an old abandoned asylum, the manner of death very distinct, then you know there is something very sinister afoot. The story bounces back and forth between past and present as we are treated to flashbacks to the asylum when it used to act as a hospital for children with mental health issues. And by that I mean a volatile mixture of cases ranging from seriously disturbed children to those who perhaps have a mild form of disability which would be far better understood in today’s society. At the time the historic sections of the book were set, the 1970’s, things like ADHD or autism, or even just being a little unruly, were seen as reasons to lock your children away. This led to some unpleasant scenes of cruelty in the hospital, where Doctors and Nurses were not as tolerant or understanding as they perhaps should have been.

Now there are a few twists in this book and on a couple of occasions the author had me wondering between one or two potential characters as to which one might be the killer. It really will keep you guessing. There were also some real edge of the seat moments in which our heroes face great peril. The writing and pacing are solid and it moved along at a fair old gallop at times – a true page turner. It kept me gripped from first page to last and the characters are truly relatable, particularly when looking at Lucy’s relationship with her daughter, the archetypal moody teenager. And having read The Good Sisters I already know that Helen Phifer has a real knack for creating a chilling atmosphere. This was no exception with the scenes in the asylum, both past and present sending a shiver down my spine.

All in all, a great start to the series and I can’t wait to read more about Lucy and Mattie.

Helen Phifer’s love of reading began with Enid Blyton, before progressing on to Laura Ingals Wilder and scaring herself with Steven King.

My thanks to Netgalley and Publishers Bookouture for the advance copy of The Lost Children for review. It is available to purchase now from the following sites.

Make sure to stop by the other blog tour stops including my blog tour buddy today,  Bookish Bits 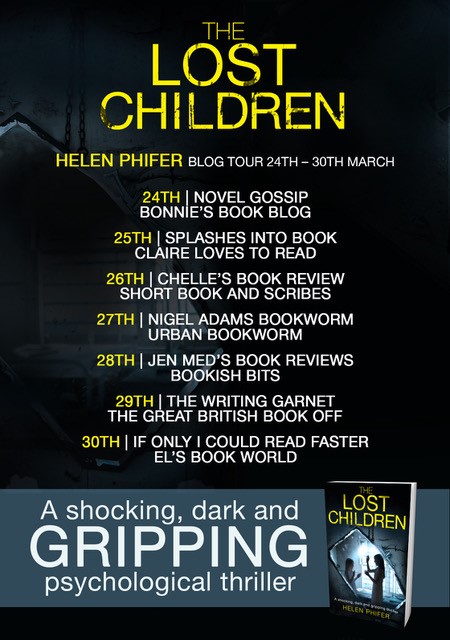 One thought on “#BlogTour – Review: The Lost Children by Helen Phifer (@helenphifer1; @bookouture)”