Today I am delighted to be part of the blog tour for Boundary the new and atmospheric thriller by Andrée A. Michaud (trans. Donald Winkler) which is published by No Exit Press on 23rd March. I’ll share my review with you shortly but first, here is what this book is about.

A chilling thriller as compulsive as Emma Cline’s The Girls.

It’s the Summer of 1967. The sun shines brightly over Boundary lake, a holiday haven on the US-Canadian border. Families relax in the heat, happy and carefree. Hours tick away to the sound of radios playing ‘Lucy in the Sky with Diamonds’ and ‘A Whiter Shade of Pale’. Children run along the beach as the heady smell of barbecues fills the air. Zaza Mulligan and Sissy Morgan, with their long, tanned legs and silky hair, relish their growing reputation as the red and blond Lolitas. Life seems idyllic.

But then Zaza disappears, and the skies begin to cloud over..

When I received the copy of this book, I admit to being very intrigued. My copy was a completely black cover with a simple question on the front: If you went missing, who would look for you? Now this really got me wondering. With so little to go on and absolutely no opportunity to judge the book by its cover, I was able to go into this experience somewhat blind, and to be honest, I am glad I did. This is the kind of book that needs to be read without preconception. It is a clever and truly atmospheric and captivating novel that deserves to be taken on its own merits.

This is the story of two young girls, Zaza and Sissy. They are carefree best friends who lord around the small community of Boundary, a town which grew up around an isolated lake near the Canadian/US border. The town, for its newness, still has a turbulent past; an event which has cast a partial shadow on the township. These girls are fearless and lost within the sphere or their own friendship. They are inseparable and save for a difference in hair colour look and act as though they were twins. Few people register in their consciousness, other than as a subject of mockery, no matter how they try, and for Andree Duchamp, a young girl who resides in Boundary with her family, they are a fascination. She watches their friendship from afar and she remembers. Remembers the fateful events of that one humid and oppressive summer which saw the shadow grow darker, changing the future of the idyllic Boundary forever.

The story itself is quite simple. Two girls, best friends, disappear, one after the other, and it is the investigation of this mystery, this crime, and its impacts upon the close and isolated community which form the bones of the story. But it is the styling of the writing that makes this such a unique experience. Chapters are of variable length stretching from a single paragraph to a few pages, but all serve to inform the pacing of the story. We have brief flashes or flashbacks, to the moments that Zaza and Sissy meet their fates, as well as interjections from Andrée whose first person voice adds a child’s perspective to a very adult situation, while the majority of the text is told in the third person. It is a largely omniscient perspective, which describes the thoughts and feelings of the township, the suspicions, the prejudices, which arise from the situation the community finds itself in.

The weariness of the police, both Chief Inspector Michaud, already haunted by a previous case, and Inspector Cusack, who is set to be plagued by his own new demons, is captured perfectly and feels truly authentic. There is no big case breaker, no manic chase sequence and their job is more complicated by the fact that there is a language barrier between the French and English speaking residents. Their frustrations ring loud and clear and add to the feeling of hopelessness which seeps from every page. And the grief and guilt felt by the parents of the two girls is also palpable, as is the mistrust and unease amongst the community.

What may catch some readers out, and it is purely a matter of personal taste, is that this book is told almost entirely without dialogue. The few fragments of dialogue which exist are told more like memories than conversation, in italics rather than in speech marks. I have only seen this technique applied once before and it does take a while to get used to. Where the other book had a almost mythical and ethereal feel throughout, this one is not quite of the same ilk. There was no doubt in my mind that this story was real – that it was happening to the residents of Boundary – and perhaps the fact that the conversation in this book is a little more obvious may make it easier to follow. But where dialogue often breaks up or informs the action, this book is driven largely by description alone. Now I liked it, but it did make it feel longer than the number of pages may suggest, and just as the investigation reads more like a slow unravelling of a mystery, I found my reading pace followed the same vein. I can’t help feeling that this will be a Marmite book for that very reason. Some will love it, others may struggle to get into the flow of the story.

I would heartily recommend giving this book a chance. Michaud has created a very clever mystery and the way in which she has built tension and atmosphere through the hauntingly beautiful narrative is truly effective. The backstory which runs throughout, that of trapper Pete Landry, adds a further element of unease and almost legend to the story. The woods are dark and oppressive, the story itself occasionally gruesome and while the two girls may not elicit much by way of sympathetic feeling due to their attitude and behaviour, they are just teenage girls and the fate that awaits them is quite brutal. Yet the motives for the crime are simple and all the more startling for it.

This is not a book in which anything will necessarily shock you. It is not a book which will have you on the edge of your seat through fast action sequences. It is one which slowly and quietly seeps into your consciousness. It requests and deserves your attention but be warned. Once it has got it, it is not inclined to let it go. It is a book which will, on some level, haunt me for some time to come.

I should give due credit Donald Winkler as this translation is seamless.

A chilling and hauntingly effective 4 stars.

My thanks to Anne Cater and publishers No Exit Press for providing the ARC of Boundary and inviting me to join the blog tour. Boundary is available from Thursday 23rd March and can be purchased from the following links.

Andrée A Michaud is a two-time winner of the Governor General’s Literary Award for Fiction (Le Ravissement in 2001 and Bondrée in 2014) and the recipient of the Arthur Ellis Award and the Prix Saint-Pacôme for best crime novel for Bondrée, as well as the 2006 Prix Ringuet for Mirror Lake (adapted for the big screen in 2013). As she has done since her very first novel, Michaud fashions an eminently personal work that never ceases to garner praise from critics and avid mystery readers alike. In 2010, her thriller Lazy Bird, set to the rhythms of jazz, was published by Les Éditions du Seuil in France, as part of the Point Noir Collection.

Be sure to take a moment to stop by one of the other brilliant blogs taking part in the tour. 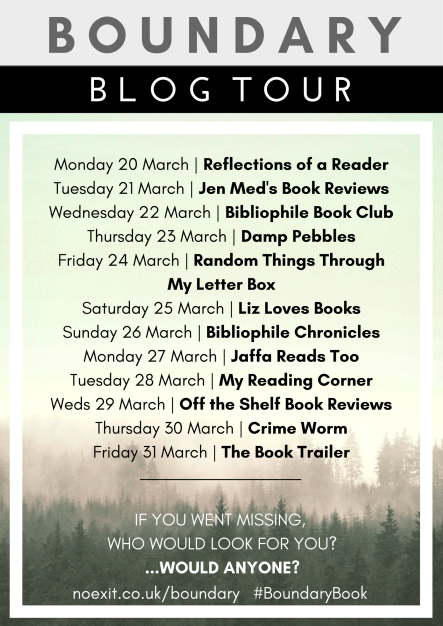