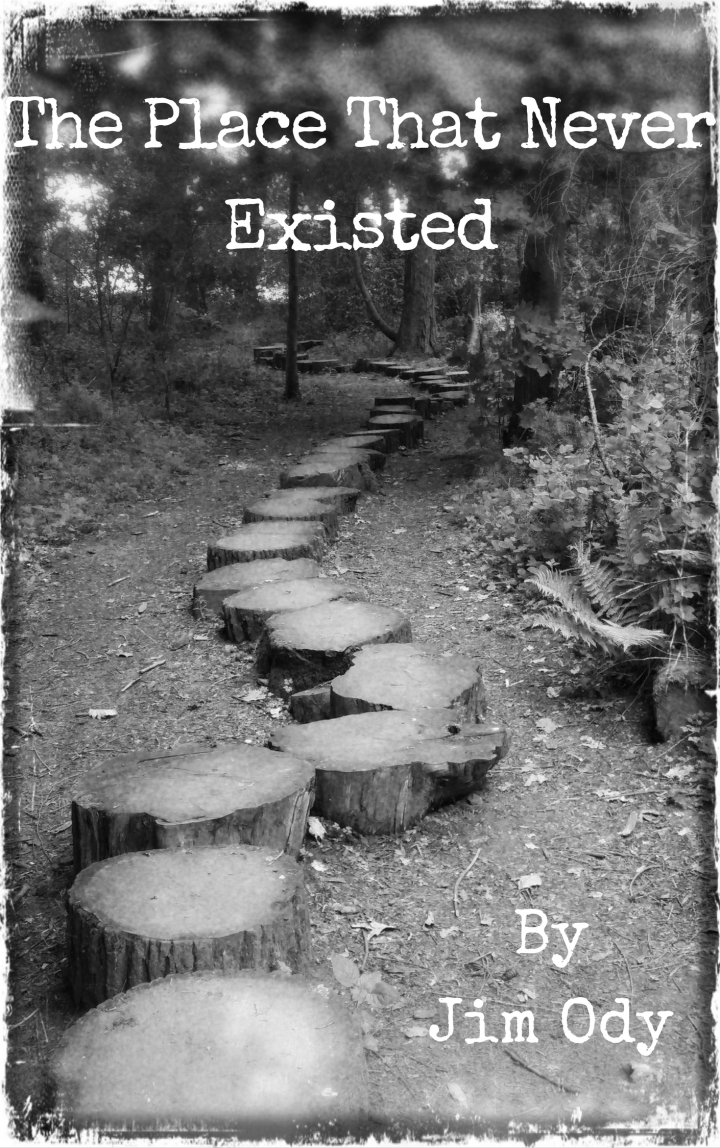 I am delighted to be able to share with you the prologue from The Place That Never Existed by Jim Ody as part of the blog tour. Other stops on the tour today are The Great British Book Off and Bibliomaniac UK. Make sure to stop by.

For Paul and Debbie it was meant to be the happiest time of their lives – a small village wedding in front of their family and friends, followed by a quiet honeymoon in Devon. Not everyone was happy to see them together. Someone from the past was intent on ending their marriage before it had really started.

Now, supposedly away from it all in a picturesque log cabin, Paul and Debbie find themselves in the midst of mysterious happenings. Unexplained disappearances with people turning up dead, and all of it centred on the site of an horrific murder.

A place the locals wish was a place that never existed.

The windows were smeared with the dusty sands of time. Loving hands had ceased cleaning here years ago, and the walls held secrets of something that once was, but that time had now lost.  The aura of a forgotten house that was sat in such beautiful forest surroundings should be idyllic, but somehow there was an unspoken sinister presence that instantly put you on edge. A spine-tingling feeling aroused by one too many horror movies of deserted houses in the woods just like this.

“So what do you reckon went on in this place?” Debbie said with a twinkle in her eyes, taking in everything she could see in the kitchen, her imagination running wild. This was the first room that they had seen, having opened up the backdoor of what appeared to be an abandoned house, and tentatively walking in.

The place was a complete mess. Debbie was torn between the excitement of exploration, and the need to get outside and run back to their own cabin. This seemed naughty at the most, but this wasn’t an open house, so through the eyes of the law, they were trespassing. This wasn’t everybody’s idea of a honeymoon, but then they weren’t anybody!

Paul shrugged, looking around at it all. His eyes finally coming to rest on his tall blonde wife who looked positively intrigued by the place. “It looks abandoned. There is something slightly Mary Celeste about it though.” He was drinking it all up, the mystery stirring up his creative juices almost overwhelming his senses. He was a Graphic Designer, so every detail he noted down in case a client wanted a website or eerie-meets-theacabre. More than likely one of his author clients. They were all a little odd.

“Exactly!” Debbie clicked her fingers. “A family running for their lives, never to return!”

They were stood here amongst cobwebs and dirty dishes, in a house in the middle of God-knows where. A long looping walk on their cheap-as-chips honeymoon had brought them here. A five-star hotel in the Maldives wouldn’t have offered them such adventure. Just the boredom of warm white sands, a cyan coloured sea lapping at their feet with cocktails, in their own paradise. Speedos and bikinis, sunburn and coconut lotion, relaxing and reading the day away. Awful.

The backdoor of the house wasn’t exactly hanging off of its hinges, and at first appeared padlocked, but ever resourceful, Paul noticed the weak hinges, and pulling out a penknife, he was able to unscrew and literally take the door off of its hinges. That all said, it was plainly obvious that this was house, but it had been a long time since someone had considered it home. Spillages were plentiful and some sort of wildlife had got in at some point to scavenge for food, and generally cause mischief – if of course that was ever a conscious consideration to the local woods dwellers.

Paul picked up a magazine that felt brittle to the touch, the smell of the slowly rotting paper released into the air once moved. “These things have just been left?”

There was something eerie about the clock that had stopped dead on midnight, however many number of positions the clock could’ve stopped on when the batteries faded with energy and died. And this train of thought seemed so very apt.

“We should buy it, babe. Let’s leave our lives and escape here!” Debbie grinned, though Paul knew that she was joking. It was possible that cleaning products and eggshell paint with the odd splash of accented colour would transform the place, unleashing from nowhere warmth that it now so lacked. However the practicalities rained down on any fanciful ideas turning them in to just that, exposing it for what it really is. A lot of work stuck out in the middle of nowhere. For one thing this place was a nightmare to get to. The spring and summer would be wonderful, but cold dark winters would have you turning into something born from Stephen King’s mind. The other massive issue would be that as an internet blackspot, he would struggle to work from here, and so would have to rent an office. An added and unwanted cost.

All around pots and pans darkened with stubborn stains were sat hap-hazard on the worktop. There was a thick film of dust on top of everything, and even the pictures on the walls could barely be seen as the photos or paintings were hidden with age.

Despite her better judgement Debbie was the first to leave the kitchen and search further into the unknown. She loved to push herself, entering marathons, and endurance races on almost a monthly basis. Her long blonde hair was often pulled back quickly and efficiently into a ponytail that was often seen bopping to her quick-rhythm behind. Her self-confidence physically gave her a devil-may-care attitude, and also scared the life out of Paul. He happily went along with her adventures. A keen mountain-biker and occasional kayaker, he also played five-a-side football so was far from unfit. They were those annoyingly fit couple that go to bed at night fully exhausted through physical exertion, rather than due to minor fatigue. Neither were twitchy or scared easily, and so their rational thought processes pushed them on when others may well have retreated and returned home.

This was perhaps their first mistake.

Paul was still looking in the drawers of the kitchen, almost obsessed with trying to timeline the mystery evacuation, when he suddenly noticed something at the corner of his eye. A blink of a small red light.

When he looked up he saw the camera.

And then Debbie suddenly jogged back in, her eyes wide open.

“Shit.” Was Paul’s response, as they hastily retreated through the backdoor, glad that they would not be visible from the front of the house. He glanced quickly at the door that he had propped back up, and thought of the camera…

Outside the garden was overgrown with a stone wall leading around the side like a half boundary. They ran towards it, through a gap where it had begun to crumble and ducking right down, hid behind it. They were deep in a large forest and they could’ve made it well within the comfort of the trees, but without a spoken word to each other, they both wondered who the visitors were. Perhaps the house was going to be done up.

Crouching as low as they could, they almost crawled following the wall around the side to a gap that they could both look through without fear of being seen.

The van was a large dark Ford Transit. Three men got out. The two from the front of the van ran to the back to open the doors, and the other one, who looked slightly older with receding white hair, stood erect surveying the surrounding area.

He knows, they thought. That was such an illogical thought, but he looked like he was almost sniffing the air.

“What is he looking at?” Debbie said in a whisper. “He couldn’t look any more suspicious if he were to pull out a gun and unload bags of money.”

What came out of the back of the van was not bags of money.

With one man on one end, and the other stockier man on the other end they pulled, and then carried what looked like a stretcher.

A stretcher with a sheet-covered body on it.

“That looks like a body,” Paul said aware of how obvious he must’ve sounded.

“Shit, babe. What if we were still in there?”

The lone man had rushed in front of them presumably to open the door. But not before pulling something small and black from the back of his jacket.

“I don’t like this,” Paul added as they were left there with no one in sight.

A small part of them both was curious to know what was going on but they once again decided that they shouldn’t be there.

And then they heard the scream.

There were definitely three men. So who was the woman?

Was she under the blanket, or was she in the house with them?

Paul and Debbie ran away into the forest like their lives depended on it, but Paul couldn’t forget the camera.

How amazing does that sound? If like me you are intrigued to know who or what was behind that piercing scream, you can bag yourself a copy of the book from the following links:

As a child Jim wanted to be a truck driver – more specifically Kris Kristofferson in the movie ‘Convoy’, however somehow this never happened, nor did he ever smuggle moonshine in Hazzard County, find treasure with his buddies in the Goondocks, or hunt sharks on Amity Island. He did win ‘The Spirit Of Judo’ award as a seven-year-old, and have published his design of a ‘Dog-Walking Machine’ in an English text book at the age of ten; so every cloud and all of that…

Jim has had poems and articles published on a number of websites, and for eight years, was a weekly music reviewer for a popular music website where he got to meet bands and see free gigs.

Jim has published two books ‘Lost Connections’ and ‘The Place That Never Existed’, and had his short story, ‘The Moth In The Jar’ selected and published in the charity anthology ‘Dark Minds’.

Jim lives with his wife and three children in Swindon, Wiltshire, and is currently writing his next novel ‘A Cold Retreat’ (due out in summer 2017); and more than likely eating chocolate. And watching football.

You can follow the rest of the tour at the following sites where you’ll find a great mix of articles and reviews:

One thought on “Blog Tour: The Place That Never Existed by Jim Ody (@Jim_Ody_Author; @emmamitchellfpr)”