So, I’m a day earlier with my recap post this week and I think moving forward I’ll probably be flitting between Sunday and Monday for the posts, depending on what I have in the diary. This coming week I have blog tours on both Monday and Sunday, hence my pulling this forward by a day.

This has been an eventful week. Fun, long, busy, and tiring, but rewarding too. It started with a quick round trip to Dublin on Monday. Second time in eight days and I’m back again at the end of the month but I did enjoy a nice latte and piece of caramel shortbread at the airport so it wasn’t all bad ;). Tuesday saw me spend a whole day deleting e-mails in the office. Wednesday was a mix with a morning in and afternoon out. The out part was extra special as I took a train down to London for the Sealskin launch at Goldsboro Books. It was a lovely evening and I got to meet a few of my fellow bloggers too so that was a nice added bonus.

Thursday saw me head to Birmingham to watch the tour of Billy Elliot, a late Christmas present from my sister, and Friday saw me sitting in my office, playing with spreadsheets and listening to The Roanoke Girls audio book. It’s a tough life I lead but someone has to make those small sacrifices ;).

I passed a bit of a milestone this week, hitting 2500 followers. When I started the blog up last May I never really thought about growing the stats or what my reach might be. It was just somewhere to collate my reviews (other than Good Reads), a place for me to channel my thoughts and feelings about books. I had no idea about how many other blogs were out there, had never heard of blog tours, hadn’t even considered the concept of author interviews or posting of extracts and certainly never imagined that people would actually want to ask me to read their books. Now I’ve been going a little over nine months and it feels like I’ve been doing this forever. I wouldn’t change a thing. As a way of a little thank you to those of you who follow, read and repost my reviews, I’ll be putting together a bit of a giveaway over the next few days so watch this space.

So, it wasn’t really a book post kind of a week this week. That said, I did collect my latest delivery from Goldsboro books, the signed edition of Quieter Than Killing by Sarah Hilary. Absolutely loved the book so I’m thrilled to add it to my signed firsts collection. 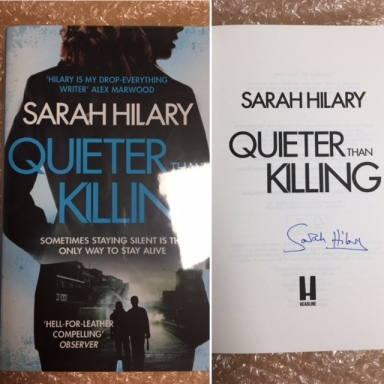 I also picked up this beauty while I was at the Sealskin launch.

When I got home on Thursday afternoon I found that the ‘Baddy Bag’ that I won as part of the Facebook launch for The Sixth Window by Rachel Abbott had arrived. It is absolutely fabulous and I have to say a massive thanks to Rachel and her team for making the launch party such a fun event. And thanks to Llanfairpwllgwyngyllgogerychwyrndrobwllllantysiliogogogoch for just being a really long and difficult word to spell lol. 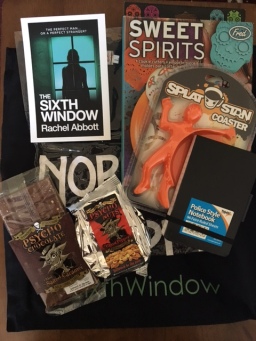 In terms of purchased books, it was mostly pre-orders this week (I think – I really should take a better note of things like that…) including the new Angela Marsons Kim Stone book, Dead Souls. I did not in any way shape or form just order this without reading the blurb. Nope. Not me… Actually I did. I always do with these book. And when I finally went back to read the blurb (thought I may as well) I noticed I was quoted on the Amazon page – saying that I always pre-order these books without even stopping to read the blurb. You honestly couldn’t make it up lol.

I got these approvals from NetGalley taking my to read total up to 17 books again – but I’m not sorry because I really want to read them lol. 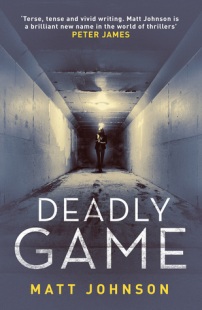 Reeling from the attempts on his life and that of his family, Police Inspector Robert Finlay returns to work to discover that any hope of a peaceful existence has been dashed.

Assigned to investigate the Eastern European sex-slave industry just as a key witness is murdered, Finlay, along with his new partner Nina Brasov, finds himself facing a ruthless criminal gang, determined to keep control of the traffic of people into the UK. On the home front, Finlay’s efforts to protect his wife and child may have been in vain, as an MI5 protection officer uncovers a covert secret service operation that threatens them all…

Picking up where the bestselling Wicked Game left off, Deadly Game sees Matt Johnson’s damaged hero fighting on two fronts. Aided by new allies, he must not only protect his family but save a colleague from an unseen enemy … and a shocking fate.

I loved the first book in the series, Wicked Game, and this book was no different. Shedding new light upon the events of book 1, Deadly Game is another high stakes, action and intrigue filled book, this time with a lot more ‘spook’ action, and well worth reading. My full review will be out next week as part of the blog tour, but in the meantime you can purchase the e-book here.

The Roanoke Girls by Amy Engel

The Roanoke girls seem to have it all. But there’s a dark truth about them which is never spoken. Every girl either runs away, or dies.

Lane is one of the lucky ones. When she was fifteen, over one long, hot summer at her grandparents’ estate in rural Kansas, she found out what it really means to be a Roanoke girl. Lane ran, far and fast. Until eleven years later, when her cousin Allegra goes missing – and Lane has no choice but to go back.

She is a Roanoke girl.

Is she strong enough to escape a second time?

Wowsers. The subject of this book is very dark and if this had been more gratuitous in its execution, would have been completely unpalatable and inaccessible. Instead, it does not glorify or trivialise the subject matter. It is something far deeper than that. This won’t be a book for everyone – completely Marmite because of the subject matter – and I am going to take my time in reviewing, partly because I listened to the audio as much as read the book, which made it a rather unique experience that I need proper time to digest. In the meantime, you can purchase a copy of the book here. 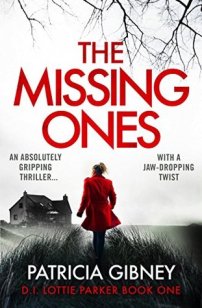 The Missing Ones by Patricia Gibney

The hole they dug was not deep. A white flour bag encased the little body. Three small faces watched from the window, eyes black with terror.

The child in the middle spoke without turning his head. ‘I wonder which one of us will be next?’

When a woman’s body is discovered in a cathedral and hours later a young man is found hanging from a tree outside his home, Detective Lottie Parker is called in to lead the investigation. Both bodies have the same distinctive tattoo clumsily inscribed on their legs. It’s clear the pair are connected, but how?

The trail leads Lottie to St Angela’s, a former children’s home, with a dark connection to her own family history. Suddenly the case just got personal.

As Lottie begins to link the current victims to unsolved murders decades old, two teenage boys go missing. She must close in on the killer before they strike again, but in doing so is she putting her own children in terrifying danger?

Lottie is about to come face to face with a twisted soul who has a very warped idea of justice.

Another first in a series, and another Ireland based mystery. I loved the intrigue in this book, the slightly damaged detective, Lottie Parker, and the story which moves between past and present. Coincidentally I read half of this book on my flight to Dublin. It seemed fitting. My review will follow soon and the book is released on 16th March. You can preorder it here.

Not my most productive reading week but given I was a bit busy, I’ll take it. I had a full week on the blog though with blog tours and a couple of reviews.

Blog Tour: The Dead Of Winter by Billy McLaughlin

The week ahead is another cracking (and long) one. I have two days of recruitment and retention training but I won’t let that put me off. I’m also off to Warrington for a meeting (lucky me) but I have great plans for the blog. I am taking part in blog tours for The Place That Never Existed by Jim Ody, Imposters In Paradise by Maxine Barry, Deadly Game by Matt Johnson and Six Stories by Matt Wesolowski.