Yes well. This has not been a particularly productive week. I have no idea where it disappeared to but disappear it did and while I know I’ve been busy, I have no idea doing what. It certainly hasn’t been reading. At least, not to my usual speed.

In my defence, Monday was a very long day. Travelled to Dublin for a meeting which essentially lasted from the minute I arrived at the hotel until the minute the taxi driver came to pick me up again with only a couple of short toilet breaks to boot. My brain was frazzled by that point so any of my normal reading time on the plane was gone as I couldn’t concentrate. Because I was with a colleague I missed out on reading time pre-flight and audio book time on the trip to and from the airport too so all in all it was a terrible day.

Tuesday, I didn’t really get a chance to read because I was otherwise engaged. But it was soooo worth it because I was at the Orenda Roadshow at Liverpool. Never has an evening been so well spent. Such a lovely bunch and with such amazing books to boot. And I have signed copies of all eight now. Guess who is a happy bunny?

Wednesday night was a bit of a review catch up session and I got little reading done so I finally finished my first book this week on Friday. Friday! What the heck? Saturday saw me on a train to Leeds for a bookish catch up with the TBC group so I got a little more reading done on the way there. The way back was rather noisy (understatement) and it took all my restraint not to commit murder so reading time lost there too. Sunday… well I’m in mega catch up mode now and no mistake. I did manage to start an audio book while number crunching at work on Thursday so that’s another one I can put a big tick against.

I am hoping this week will be kinder as I am so behind, have a bunch of books to read and review for blog tours and have so many overdue Netgalley books I think my brain is set to go into meltdown. But hey. Could always be worse, right?

Feeling all the book love this week. I got this in the post; the signed copy of Ragdoll by Daniel Cole that I ordered from Goldsboro Books. Loved this and so happy to have it in my signed firsts collection.

Because I could, I bought these at the Orenda Roadshow. 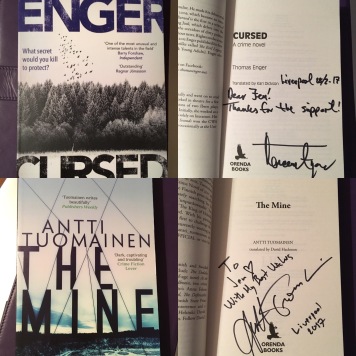 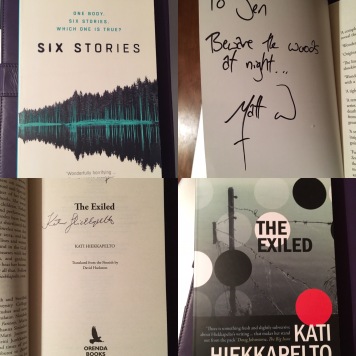 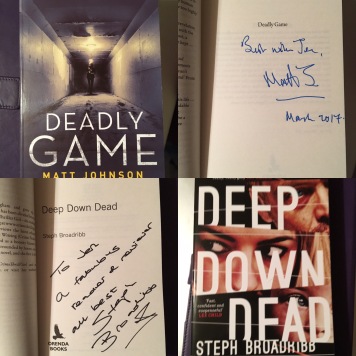 And then on Friday, I received this little beauty. I’m on the blog tour next week with an extract and I couldn’t be happier.

And… my win from yesterday – two very nice little books by Ross Greenwood.

Then, because, you know, I absolutely need more books, I bought these yesterday on my kindle… 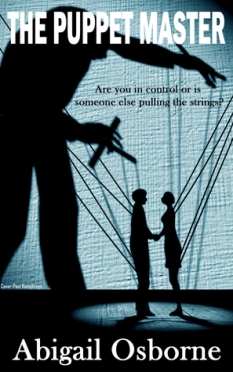 And I picked up these from Netgalley…

Still, life would be dull without a little variety and a lot of books now wouldn’t it.

Detective Garda Cathy Connolly’s life has taken an unexpected turn. Faced with an unplanned pregnancy, Cathy’s trying to decide how she’s going to balance motherhood with the very real dangers of life on the job, especially when her latest case isn’t as straightforward as it first appears.

Called to what seems like a routine break-in, Cathy discovers the bones of a baby concealed in the hem of an old wedding dress. When the dress’s original owner, Lavinia Grant, is found dead in a Dublin suburb, Cathy is drawn deep into a complex web of secrets and lies spun by three generations of women.

Meanwhile, a fugitive killer has already left two dead in execution style killings across the Atlantic – and now he’s in Dublin with old scores to settle. Can the team track him down before he kills again?

Struggling with her own secrets, Cathy doesn’t know how dangerous – and personal – this case is about to become . . .

This is one of the books I picked up from Netgalley. A little slower in pace than some police procedurals I’ve read it still completely engaged me. Our heroine is a young police officer with her fair share of problems, and the case is an entirely intriguing one. My review will be out later this week (time permitting) but in the meantime you can pick the book up here.

1997. Scarclaw Fell. The body of teenager Tom Jeffries is found at an outward bound centre. Verdict? Misadventure. But not everyone is convinced. And the truth of what happened in the beautiful but eerie fell is locked in the memories of the tight-knit group of friends who took that fateful trip, and the flimsy testimony of those living nearby.

2017. Enter elusive investigative journalist Scott King, whose podcast examinations of complicated cases have rivalled the success of Serial, with his concealed identity making him a cult internet figure.

In a series of six interviews, King attempts to work out how the dynamics of a group of idle teenagers conspired with the sinister legends surrounding the fell to result in Jeffries’ mysterious death. And who’s to blame… As every interview unveils a new revelation, you’ll be forced to work out for yourself how Tom Jeffries died, and who is telling the truth. A chilling, unpredictable and startling thriller, Six Stories is also a classic murder mystery with a modern twist, and a devastating ending.

This is another brilliant offering by Orenda books. The books  is set in a series of interviews and podcasts which delve into an unsolved crime from twenty years ago. I’m not going to say too much as I’m on the blog tour for this in a little over a week and I want to make you wait. The e-book is available now and can be purchased here. 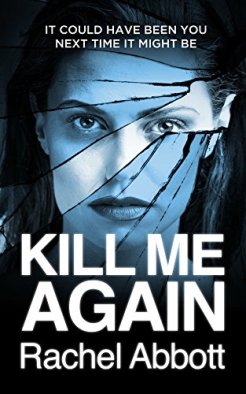 Kill Me Again by Rachel Abbott

When your life is a lie, who can you trust?

When Maggie Taylor accepts a new job in Manchester, she is sure it is the right move for her family. The children have settled well although her husband, Duncan, doesn’t appear to be so convinced.

But nothing prepares her for the shock of coming home from work one night to find that Duncan has disappeared, leaving their young children alone. His phone is dead, and she has no idea where he has gone, or why. And then she discovers she’s not the only one looking for him.

When a woman who looks just like Maggie is brutally murdered and DCI Tom Douglas is brought in to investigate, Maggie realises how little she knows about Duncan’s past. Is he the man she loves? Who is he running from?

She doesn’t have long to decide whether to trust him or betray him. Because one thing has been made clear to Maggie – another woman will die soon, and it might be her.

Never one to do anything in a logical order, I listened to this as an audiobook last week, after I’d already read the next book and before I read the one before it ;). I like to keep things interesting. Full of the twists, turns and high quality writing I’ve come to anticipate and expect from Rachel Abbott, my review will be out imminently. In the meantime, why not order the book for yourself here.

Managed another full week of posts on the blog. Only one tour this past week as well so it was pretty well all me all week. Scary… I’ll never keep this up (especially if I don’t keep up reading) but it’s been fun while it’s lasted.

Review: Under Fire by Rachel Amphlett

My Bookish Night Out: The Orenda Books Roadshow

Rapid Fire Book Tag – Why You Should All Read Tall Oaks

So what is in store for the week ahead? Well, aside from another trip to Dublin today where I hope to have a far more productive reading opportunity (I’m travelling alone) I have a couple of blog tours and hopefully some new reviews to share. Providing I get time to write them 🙂

I have a double header of blog tours tomorrow starting with Gustave Flaubert: The Ambiguity of Imagination by Giuseppe Cafiero. Then I am absolutely thrilled to be able to share an extract from Quieter Than Killing by Sarah Hilary. On Wednesday you can join me for the blog tour for The Dead of Winter by Billy McLaughlin and then on Friday its time for Secret Demon 2 by CL Ryan. Busy, busy. Just how I like it. 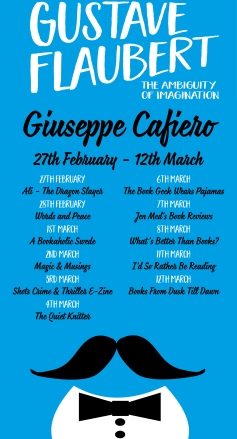 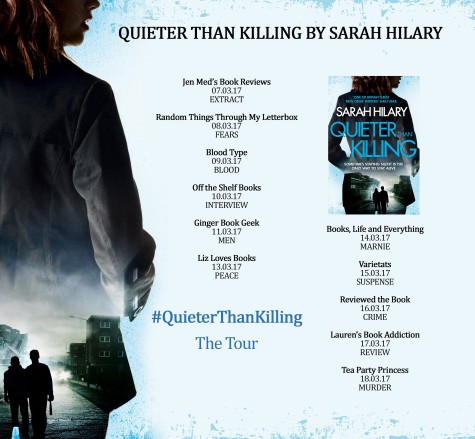 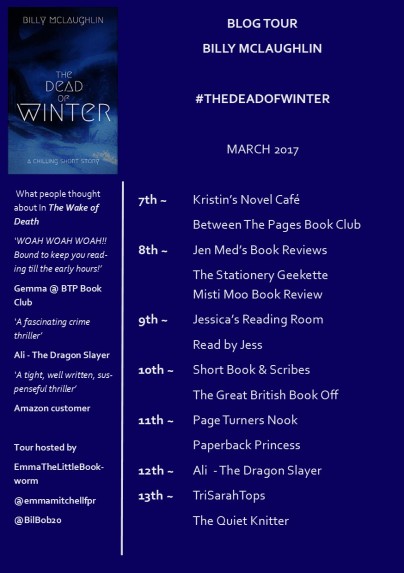 Have a fabulous week of bookishness all