This is getting to be such a regular observation that I am considering renaming my blog to A Busy Week This Week. All joking aside though, it kind of has been. A bit less time spent on the road with just the one trip up to Edinburgh at the end of the week. Part business part pleasure. Business – a 12+ hour round trip, hampered by dozy Doris on Thursday, to deliver two hours of training before turning round and driving home again on Friday. Pleasure – getting to attend the launch of Written In Bones by James Oswald, at Waterstones in Princes Street on Thursday night and getting chance to listen to another audio book along the way.

The rest of the week was spent wandering from meeting to meeting and trying to get on top of the 1000+ emails in my inbox. I just need a couple of undisturbed hours in the office to clear those down… However, I did get in a couple of books, and buy a good few more, so it’s not all bad.

Beautiful book post from Karen Sullivan at Orenda this week. Deadly Game by Matt Johnson. Coincidentally it was the first book in the series, Wicked Game that I was listening to on my drive north.

I’m on the blog tour for this next month and can’t wait to get started on reading this beaut.

On top of this, I’ve had a pretty busy book buying week. Firstly I picked up the 7th addition to my signed Inspector McLean book collection. It now has pride of place on my bookshelf along side it’s brethren and I’m so happy I had to go and work in Edinburgh this week. Perfect timing and such a happy coincidence 😉 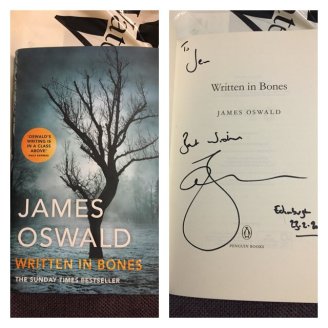 On the way home, we decided to call in at Gretna Green Outlet Village and couldn’t resist a stop off at The Works where I picked up a few more ‘essentials’ in the shape of the 1st four books in Kate Rhodes’ Alice Quentin series. Naturally, I hate to leave things half done so I purchased the fifth on kindle when I got home. Oops.

While in The Works I spotted another book that I’d seen popping up all over the place. It’s always stuck in my head as the title character shares a name with the wife of one of my Regional Management Team and this book in particular, The Strange Death of Fiona Griffiths by Harry Bingham, always makes me chuckle and wonder just what Mark has been up to. Curiosity got the better of me and I ended up buying all of the current releases in the Fiona Griffiths Series.

Now all I need is the time to read them all… 😉

A body is discovered with the dismembered parts of six victims stitched together like a puppet, nicknamed by the press as the ‘ragdoll’.

Assigned to the shocking case are Detective William ‘Wolf’ Fawkes, recently reinstated to the London Met, and his former partner Detective Emily Baxter.

The ‘Ragdoll Killer’ taunts the police by releasing a list of names to the media, and the dates on which he intends to murder them.

With six people to save, can Fawkes and Baxter catch a killer when the world is watching their every move?

Oh my life. Did I mention I love this book? Finally got a chance to finish it and wonder why I put off reading for so long. Classic detective fiction with a touch of the grotesquely bizarre. The unusual dispatching of some of the Ragdoll Killer’s victims really spoke to the dark half of my soul. I mean that in a purely readery, horror movie lover kind of way. I’m not really psycho. (much). You can find my full review here and the book can be purchased at Amazon UK.

2001. Age is catching up with Robert Finlay, a police officer on the Royalty Protection team based in London. He’s looking forward to returning to uniform policing and a less stressful life with his new family. But fate has other plans.

A policeman is killed by a bomb blast, and a second is gunned down in his own driveway. Both of the murdered men were former Army colleagues from Finlay’s SAS regiment, and a series of explosive events makes it clear that he is not the ordinary man that his colleagues and new family think he is.

And so begins a game of cat and mouse in which Finlay is forced to test his long-buried skills in a fight against a determined, unidentified enemy.

I listened to this on my way to Edinburgh. It is an absolutely brilliant and fast paced novel, touching upon true events from the murky past history or terrorism, some of which has been drawn from the author’s own experiences in the police. The plotting is tight, the action high octane and explosive and the tension ratchets up as the stakes grow higher and higher for our protagonist Robert Finlay. My review is to follow, but having read this, I cannot wait to sink my teeth into the next book, Deadly Game.

In the meantime, you can order Wicked Game here at Amazon UK 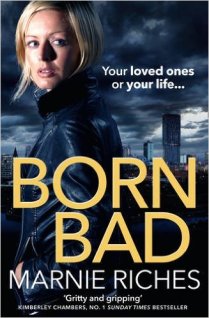 The battle is on…

When gang leader Paddy O’Brien is stabbed in his brother’s famous nightclub, Manchester’s criminal underworld is shaken to the core. Tensions are running high, and as the body count begins to grow, the O’Brien family must face a tough decision – sell their side of the city to the infamous Boddlington gang or stick it out and risk losing their king.

But war comes easy to the bad boys, and they won’t go down without a fight. So begins a fierce battle for the South Side, with the leading Manchester gangsters taking the law into their own hands – but only the strongest will survive…

I love Marnie Riches’ The Girl series so was thrilled to hear about Born Bad and was right onto Amazon the minute it was available for pre-order. I was even more thrilled when I found it on NetGalley. My review will be posted in the next week or so, but fans of Marnie Riches will not be disappointed by this brilliant side step from the series. Very different but still fabulous. In the meantime you can preorder the book ahead of it’s 9th March release date here.

It was another full week on the blog too, with a mixture of blog tours and reviews. I also stopped by Rachel Abbott’s The Sixth Window online launch party and was bouncy happy to learn I won the ‘speed dating’ competition (Anyone who knows me will realise how bloody hilarious that concept is). Who knew that Llanfairpwllgwyngyllgogerychwyrndrobwllllantysiliogogogoch would prove to be so lucky (and hard to fit on a single line of text…)

Blog Tour Review: Love Them And Leave Them by Sue Shepherd

Book Review: A Room Full Of Killers by Michael Wood

The Books Of My Years: The Barren 30’s and beyond…

I’ve another pretty busy week this week, work and blog wise. Off to Dublin today for the day. Here’s hoping the weather is kind with no more Doris type conditions as I hate flying at the best of times. Afternoon off tomorrow as I’m heading up to Liverpool to the Orenda Roadshow at Waterstones and I cannot wait. More signed books to add to my collection me thinks… More thrilling meetings to close out the week but aside from that boring work stuff I will have a collection of new reviews as well as a blog tour tomorrow for Drive By Shouting by Mark Chase, organised by the fab Emma Mitchell at EDM Editorial & Publicity Services.

Hope you all have a wonderful and book filled week.