It’s my absolute pleasure to be one of the next blog tour stops for the superb new book by K.L.Slater, Blink. 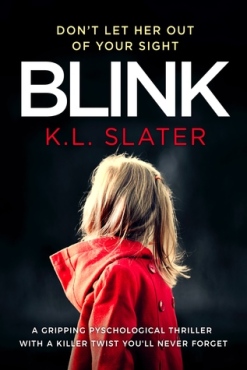 After the death of her husband, crippling debt forces Toni Cotter to leave the home that she and her daughter Evie share in Hemel Hemstead to move to live nearer to her mother in Nottingham. Nothing is here as as they are used to and grief combines with the reality of her situation to make Toni’s life just that little bit more unbearable.

Needing to earn money to pave their way, Toni takes on a part time job at an Estate Agents, a job she is far too qualified for but after a long gap in her work history she is still nervous about starting again. And with Evie struggling to adjust to her new surroundings and refusing to go to school, Toni is pushed to the edge, forcing her to turn to the wrong source for relief from her pain.

Harriet Watson is a Teaching Assistant at Evie’s school. She can see the impact that Toni’s grief is having upon the child and she is determined to step in and help. She has a plan. One which will help both Evie and Toni, if only she can get Toni to listen.

And then the unthinkable happens.

With no CCTV, no witnesses and no evidence at the scene it seems almost impossible that Toni will see her daughter again. But three years on, wracked with guilt over the part she played in her daughter’s disappearance, Toni still believes that Evie is alive. But she is trapped in her own world, and there is nobody around who can hear her cries, so just how can she save her daughter?

Wow. What a book. You could tell with ‘Safe With Me‘ that KL Slater is very accomplished at creating tension and writing a brilliant psychological thriller. She has a knack of creating characters who elicit both sympathy and concern, who are teetering on the brink of being completely unbalanced and yet still managing to function in society as seemingly normal people. Up to a point. And there is no finer example of it than here in this book. If you loved ‘Safe with Me‘, you are going to adore ‘Blink‘.

There is absolutely no doubt about it, from the moment I saw the first reviews come in, I was excited to start reading this one and once I started I couldn’t stop. I devoured it. Chomped away chapter by chapter until I had hoofed the whole damned lot and you know what? It left me hungry for more. If this was pudding (can you tell I’m on a diet – all the food analogies) this would be my favourite. Tiramisu. Rich in plot devices, decadent styling, later upon layer of deliciousness and 100% satisfaction guaranteed.

There are several points of view used throughout the book to great effect. The majority of the story is told by Toni, set three years ago in the weeks leading up to Evie’s disappearance. We also hear from Harriet Watson whose interest in the mother and daughter seems far from wholesome. There are a few other minor characters who take centre stage at varying points and the action moves between them seamlessly. And there is one very clever device used which gives clarity to the books title and is a really interesting and little used concept, but here serves to keep tension and interest high.

But oh my word, the plot. I just can’t even begin to tell you how well this story worked. I mean I really can’t because if I do I know I will end up giving up spoilers and this is a story which deserves to be read completely blind. I could wax lyrical all day about it but… Oh just do yourself a favour and read it. You won’t regret it.

KL Slater has woven a story which is so simple and yet so complex, so obvious and yet so completely surprising  that you’ll be left questioning whether you are certain the sky is really blue. She uses a kind of literary sleight of hand which is worthy of the greatest magician. Even Derren Brown would be impressed. Just brilliant.

An absolutely stonking 5 stars from me.

My thanks to NetGalley and publishers Bookouture for the ARC of ‘Blink‘ which is available from the following links:

Don’t just take my word for it though. Here is what some others are saying about Blink.

‘I finished this book in nearly one day. I was completely unable to put this book down. Everything about this book sucks you in and doesn’t let go.’ Bombshell Reads

‘Blink was just BRILLIANT’ It’s All About Books

‘The book had me from the very first sentence and kept hold of me until I finished it…. There are twists galore but on one occasion my jaw actually dropped open as I realised that all was not as it seemed. Fantastic writing, excellent characterisation that has left me salivating for book number three! Five stars.’ Angela Marsons

‘a fantastic psychological thriller and I was kept hooked throughout. Lots of twists and turns, an excellent pace and so much suspense and surprise, I didn’t quite know where the book was going at times …couldn’t be anything other than five stars!’ Donna’s Book Blog

‘With bucketfuls of suspense and intrigue Blink is guaranteed to keep the most hardened psychological thriller love on the edge of their seats. Five Stars. ‘ The Book Review Cafe

For many years, psychological thriller author KL Slater sent her work out to literary agents but never made it off the slush pile. At the age of 40 she went back to Nottingham Trent University and now has an MA in Creative Writing.

Before graduating, she received five offers of representation from London literary agents which was, as Kim says, ‘a fairytale … at the end of a very long road!’

Kim is a full-time writer and lives in Nottingham with her husband, Mac.

You can follow KL Slater at the following links:

Why not check out some of the other superb blogs taking part in this tour.

New book - a gift from me to me. I’m so nice to me. When I Was Ten by @fionacumminsauthor
New #bookpost courtesy of @wnbooks and @fmcmassociates - The Maidens by @alex.michaelides - out June 10th
More #bookpost today from @orendabooks - Black Reed Bay by Rod Reynolds. Out 13th May in ebook and 2nd September in paperback.
New #bookpost today from @orendabooks - No Honour, the upcoming novel from Awais Khan. Out 19th June In ebook ok and 19th August in paperback.
My order arrived from @orendabooks - #teamorenda mug, bookmark and tote bag. Love it. Available from the Orenda Books website along with all of their fabulous books.
A spot of retail therapy earlier at Waterstones in Shrewsbury. A new book bag and a copy of Hyde by @craigrussellauthor. Loved this book (and it’s not even out until 29th April sonIm thrilled to bag an early copy.)