Another mad week at work with two very early starts on the bounce mean a very tired book blogger. That said, I was also a very productive one as the extra mileage from trips to Bridgend and Bracknell allowed me to finish two audio books in two days. Go me.

I had a lovely bit of book post this week with copies of A Dangerous Crossing by Rachel Rhys and Falling Suns by J.A. Corrigan. I also received my signed copy of Rattle  by Fiona Cummins from Goldsboro Books which I am very happy about. 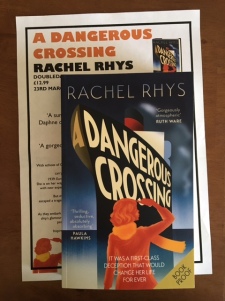 I’ll be every bit as busy, and probably twice as tired, this week as I am off on day trips to Manchester, Mansfield and Edinburgh. I have ambitious audio book plans courtesy of the extra mileage so hopefully will get to cross a few more books off my tbr. So – how did I get on this week in the end?

Books I Have Read

Little Lorna Bell is from a notorious family on a rundown estate. Everyone thinks she’s a nasty piece of work. The schoolchildren call her a thief. But Lorna’s hair is matted, her shoes pinch her feet and school teacher Claire Penny can’t help herself; some kids just need a bit more support, a bit more love, than the rest.

As the bond between teacher and pupil grows stronger, Claire sees Lorna’s bruises, and digs to uncover the disturbing tale behind them. Heartbroken, Claire knows she has to act. She must make Lorna safe. Just when Claire thinks she has protected Lorna, a chance encounter brings enigmatic stranger Marianne Cairns into their lives. Marianne seems generous and kind but there is something about her story that doesn’t quite add up. Why does she feel so at home, and why is Lorna suddenly so unsettled?

Claire has risked everything to save Lorna. But what can save Claire from the shocking truth?

My review will be published shortly. In the meantime you can order a copy of Bad Little Girl from Amazon here. 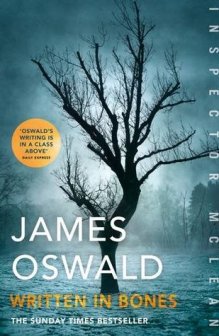 Written In Bones by James Oswald

The roots of murder run deep…

When a body is found in a tree in The Meadows, Edinburgh’s scenic parkland, the forensics suggest the corpse has fallen from a great height.

Detective Inspector Tony McLean wonders whether it was an accident, or a murder designed to send a chilling message?

The dead man had led quite a life: a disgraced ex-cop turned criminal kingpin who reinvented himself as a celebrated philanthropist.

As McLean traces the victim’s journey, it takes him back to Edinburgh’s past, and through its underworld – crossing paths with some of its most dangerous and most vulnerable people.

And waiting at the end of it all, is the truth behind a crime that cuts to the very heart of the city…

Oh how I love this series and Written in Bones was another fine addition. Once I started reading I really didn’t want to put it down. My review is planned for release day, 23rd February, but you can order a copy here. 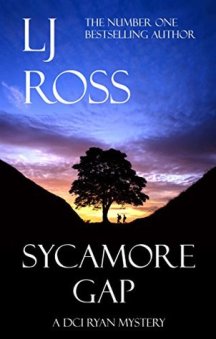 The past never stays buried for long…

Detective Chief Inspector Ryan believes he has put his turbulent history behind him. Then, in the early hours of the summer solstice, the skeleton of a young woman is found inside the Roman Wall at Sycamore Gap. She has lain undiscovered for ten years and it is Ryan’s job to piece together her past.

Enquiry lines cross and merge as Ryan is forced to face his own demons and enter into a deadly game of cat and mouse with a killer who seems unstoppable.

Murder and mystery are peppered with a sprinkling of romance and humour in this fast-paced crime whodunnit set amidst the spectacular scenery of Hadrian’s Wall country in Northumberland.

The first of the two audio books I listened to this week, it was a small departure from the paganism which was a key theme of the first in the series, but every bit as gripping. My review for Sycamore Gap can be found here and it is available to order from Amazon here.

The hunter becomes the hunted…

When a man is found dead at the remote church of Heavenfield, DCI Ryan is the only other person for miles around. The police have no weapon, no motive and no other suspects.

Already suspended from Northumbria CID, Ryan must fight to clear his name. But soon, more than his career is at stake when prominent members of the mysterious ‘Circle’ begin to die. Somebody wants Ryan’s name to be next on the coroner’s list and to survive he must unmask the devil who walks among them – before it is too late.

Unfortunately for Ryan, the devil looks just like everybody else…

Murder and mystery are peppered with romance and humour in this fast-paced crime whodunnit from LJ Ross, set amidst the spectacular Northumbrian landscape.

Another fantastic addition to the series and the second audiobook of the week. I’ve really enjoyed catching up with DCI Ryan and his team. I can’t believe I’ve not read them before. My review of Heavenfield should be posted this week and you can purchase a copy here.

The Promise by Casey Kelleher

Two sisters. One murder. And an unbreakable bond.

Growing up in squalor with their drug-addicted prostitute mother, sisters Georgie and Marnie Parker have had to endure the very darkest side of life.

When their mother is sentenced for brutally murdering a client, Georgie and Marnie’s already precarious lives are blown apart and they now share a terrible secret. Sent to a children’s home, the sisters hope this might finally be their safe haven after years of neglect. But they soon discover they’re in real danger.

Desperate to find a place of safety, Georgie and Marnie run for their lives, but end up in the hands of Delray Anderton. A violent London gangster and notorious pimp, Delray has big plans for beautiful teenager Georgie, seeing her as a chance to make some serious money.

Fiercely protective of each other, Georgie and Marnie must escape the clutches of a man who will do anything to keep the sisters for himself. And, they must keep the promise they made to each other – no one can ever know the truth.

An uncompromisingly gritty story, this one features some very difficult themes. My review will be published as part of the blog tour but you can pre-order The Promise from Amazon here.

I had another full week of posts including a guest review this week:

Blog Tour Review: Don’t Look Behind You by Mel Sherratt

I also published the first two posts in my Books of My Years feature, The Early Learning Years and The Troublesome Teens.

Another busy week ahead. I have an Around The UK in 144 Books post live this morning, a book reveal tomorrow and two very exciting and awesome blog tours, starting with Evil Games on Thursday and Sealskin on Saturday. 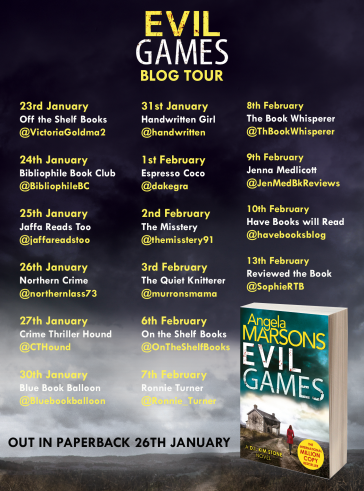 With a lot of miles planned out for the week ahead, I kind of think I will be doing a bit more listening than reading, but I’m going to attempt to read/listen to the following:

All pretty, all signed, all first edition ... all mine!!! #booklove #lovebooks #books @cjtudorauthor #bookworm #bookshelf #amreading #bookblog #bookblogger #bookblogging #bookstagram #bookstagrammer
I bought a new book from @goldsborobooks - #TheOtherPeople by @cjtudorauthor - love this book She sleeps, a pale girl in a white room . . . Driving home one night, stuck behind a rusty old car, Gabe sees a little girl's face appear in the rear window. She mouths one word: 'Daddy.' It's his five-year-old daughter, Izzy. He never sees her again. Three years later, Gabe spends his days and nights travelling up and down the motorway, searching for the car that took his daughter, refusing to give up hope, even though most people believe that Izzy is dead. Fran and her daughter, Alice, also put in a lot of miles on the motorway. Not searching. But running. Trying to keep one step ahead of the people who want to hurt them. Because Fran knows the truth. She knows what really happened to Gabe's daughter. She knows who is responsible. And she knows what they will do if they ever catch up with her and Alice . . . #booklove #lovebooks #books #signedfirst #bookworm #bookblogger #bookblog #bookblogging #bookstagram #bookstagrammer
Today I’m jenmedsbookreviews.com @mandie163.mg shares her thoughts on the haunting and beautifully atmospheric The Bird Tribunal by Agnes Ravatn. I loved this book and it remains one of my favourite @orendabooks titles of all time. TV presenter Allis Hagtorn leaves her partner and her job to take voluntary exile in a remote house on an isolated fjord. But her new job as housekeeper and gardener is not all that it seems, and her silent, surly employer, 44-year-old Sigurd Bagge, is not the old man she expected. As they await the return of his wife from her travels, their silent, uneasy encounters develop into a chilling, obsessive relationship, and it becomes clear that atonement for past sins may not be enough. Haunting, consuming and powerful, The Bird Tribunal is a taut, exquisitely written psychological thriller that builds to a shocking, dramatic crescendo that will leave you breathless. #booklove #yearoforenda #books #lovebooks #bookworm #bookblog #bookblogger #bookblogging #bookstagram #bookstagrammer #booklover
I bought another book. It has shiny red bits. It makes me happy. #PoirotsChristmas #AgathaChristie
I bought a pretty book. It has shiny silvery bits. I have book love right now. #AgathaChristie #AndThenThereWereNone #books #booklove #classics
Some lovely #bookpost from @avon_books - @helenfields_author’s #PerfectKill the latest #Luccallanch and #avaturner thriller. I love this series. He had never heard himself scream before. It was terrifying. Alone, trapped in the darkness and with no way out, Bart Campbell knows that his chances of being found alive are slim. Drugged and kidnapped, the realisation soon dawns that he’s been locked inside a shipping container far from his Edinburgh home. But what Bart doesn’t yet know is that he’s now heading for France where his unspeakable fate is already sealed… DCI Ava Turner and DI Luc Callanach are working on separate cases that soon collide as it becomes clear that the men and women being shipped to France are being traded for women trafficked into Scotland. With so many lives at stake, they face an impossible task – but there’s no option of failure when Bart and so many others will soon be dead… Get ready for a rollercoaster ride like no other, with the next gripping thriller from the number one bestselling crime author, Helen Fields. The perfect read for fans of M. J. Arlidge and Karin Slaughter. #blogtour #booklove #lovebooks #books #bookstagram #bookstagrammer #bookblogger #bookblog #bookblogging #bookbloggers #bookworm