Today I pass the blog back over to guest reviewer Mandie who shares her thoughts on the novel ‘Sunrise Canyon‘ by Janet Dailey. This book is set in one of my favourite places on earth, so I’m intrigued see what Mandie thinks… 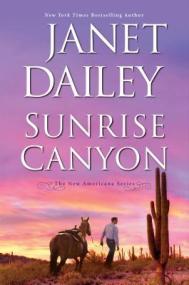 In the heart of Arizona’s Sonora Desert, a little girl in need of her father, a woman in need of forgiveness, and a war hero in need of love come together to create a family . . .

Before he left for Afghanistan, Jake O’Reilly had everything–a beautiful wife, a baby on the way, a wonderful life. Three years later, his wife is dead and he is so haunted by his memories of war that he can’t bring himself to go home. But when his wife’s grandfather tracks him down and persuades him to come work on his ranch, where Jake’s daughter is living, he agrees–even though he is reluctant to expose his little girl to the man he’s become.

At Flying Cloud Ranch, his daughter doesn’t recognize the brooding stranger he’s become. But the beauty of the ranch and the immediate connection Jake feels with his wife’s cousin Kira slowly begins to heal his wounds. Though he doesn’t want any complications, he finds himself impossibly drawn to the tough woman who runs a horse therapy program for troubled teens. And as they each begin to imagine a new future, they discover that happily ever after is always within reach–if only you are willing to open your heart . . .

Sunrise Canyon by Janet Dailey is a love story set on a horse ranch in the Arizona Desert. Here you meet Jake O’ Reilly who appeared to have everything he could ever want, a beautiful wife and a baby on the way. On his return from Afghanistan his wife is dead and he is suffering from PTSD that forces him to shut himself away from everyone and everything he knows. Then there is Kira who blames herself for the death of Jake’s wife and has taken on the responsibility of bringing up Jakes daughter Paige.

When Kira’s grandfather tracks Jake down he has been arrested for fighting. He persuades him to return with him to the Flying Cloud ranch where he comes face to face with the past he has been avoiding in the form of his young daughter, and his wife’s cousin who resents his presence and what it could mean for the life she has made.

Kira’s grandfather is taken ill shortly after his arrival and they are forced to work together to keep the business going, something neither of them is too happy about.

Jake comes across as your typical alpha male… someone who refuses help and would rather shut himself away from the world than try to face his problems head on and rely on the help of others. As the story progresses you do see traces of the man he once was as he starts to bond with some of the troubled teens staying at the ranch, finding that his army training can come in handy. You also learn that he may not be such a tough guy with his reaction to snakes and horses.

Kira is a trained psychologist who uses the horses on the ranch to try to help the teenagers and despite her initial feelings about Jake she manages to use some of that training to get through to him during one of his PTSD episodes. From this moment on there is a spark between them that they try to fight. As with all love stories they eventually give in to their feelings and when Paige goes missing they realise that they belong together.

It has been about 15 years since I have read one of Janet Dailey’s books and so the opportunity to pick up Sunrise Canyon was one I could not pass on. Whilst my reading preferences have expanded in that time I wanted to see if I would enjoy the stories as much as I used to. And for the most part I did. The setting of the Arizona Desert gives you a longing to be there and experience life on a ranch and the wide open spaces. Janet Dailey has a way of describing places, people and situations that has you wanting to be a part of it. The only downside for me was that so much time was invested in explaining the back story of the main characters and showing their struggles in the present that Jake and Kira coming together seemed a little bit rushed. One minute they seemed to distrust and dislike each other and the next they were fighting their feelings and deciding to make a life together. This is the only problem with love stories in books and I guess it is also a sign that as I have gotten older that maybe I am a little more cynical than I used to be. That being said I would still recommend this and any of her other books for those who like a bit of romance, rugged men and rugged scenery in their life.

My thanks to NetGalley and publishers Kensington Books for the ARC of the novel. It is available from the following retailers:

I bought another book. It has shiny red bits. It makes me happy. #PoirotsChristmas #AgathaChristie
I bought a pretty book. It has shiny silvery bits. I have book love right now. #AgathaChristie #AndThenThereWereNone #books #booklove #classics
Some lovely #bookpost from @avon_books - @helenfields_author’s #PerfectKill the latest #Luccallanch and #avaturner thriller. I love this series. He had never heard himself scream before. It was terrifying. Alone, trapped in the darkness and with no way out, Bart Campbell knows that his chances of being found alive are slim. Drugged and kidnapped, the realisation soon dawns that he’s been locked inside a shipping container far from his Edinburgh home. But what Bart doesn’t yet know is that he’s now heading for France where his unspeakable fate is already sealed… DCI Ava Turner and DI Luc Callanach are working on separate cases that soon collide as it becomes clear that the men and women being shipped to France are being traded for women trafficked into Scotland. With so many lives at stake, they face an impossible task – but there’s no option of failure when Bart and so many others will soon be dead… Get ready for a rollercoaster ride like no other, with the next gripping thriller from the number one bestselling crime author, Helen Fields. The perfect read for fans of M. J. Arlidge and Karin Slaughter. #blogtour #booklove #lovebooks #books #bookstagram #bookstagrammer #bookblogger #bookblog #bookblogging #bookbloggers #bookworm
Today on jenmedsbookreviews.com I take a look back at the #LoriAnderson short story from @crimethrillergirl #TheLastResort. Ever wondered what Lori got up to while she was training with JT to become the tough and smart bounty hunter we know and love? This book will give you a good taster. Done with a life of exploitation and violence, Lori Anderson is training to be a bounty hunter. Holed up in the Georgia Mountains with her reclusive mentor, JT, Lori is determined to put her new skills into practice. Behind JT's back, she breaks his rules and grabs the chance she's looking for. Will her gamble pay off, or will she have to learn the hard way? The Last Resort is the first in the Rookie Bounty Hunter series of short stories, marking the nail-biting start to a high-octane series of thrillers featuring one of the most unforgettable and fearless female protagonists in crime fiction. #booklove #lovebooks #books #teamlori #bookshelf #shortstory #yearoforenda #bookstagram #bookstagrammer #bookblogger #bookblog #bookblogging #bookbloggers @orendabooks
Today on jenmedsbookreviews.com I share my publication day review of #ADarkMatter by @writerdougj . This is and absolutely cracking tale, a missing persons investigation by a team of new to the business Private Investigators ... who also happen to run a funeral business. With one of the most memorable and original openings I have read in a long while, and a great cast of female characters who show how strong women can be, I loved it. Meet the Skelfs: well-known Edinburgh family, proprietors of a long-established funeral-home business, and private investigators… When patriarch Jim dies, it’s left to his wife Dorothy, daughter Jenny and granddaughter Hannah to take charge of both businesses, kicking off an unexpected series of events. Dorothy discovers mysterious payments to another woman, suggesting that Jim wasn’t the husband she thought he was. Hannah’s best friend Mel has vanished from university, and the simple adultery case that Jenny takes on leads to something stranger and far darker than any of them could have imagined. As the women struggle to come to terms with their grief, and the demands of the business threaten to overwhelm them, secrets from the past emerge, which change everything… A compelling, tense and shocking thriller and a darkly funny and warm portrait of a family in turmoil, A Dark Matter introduces a cast of unforgettable characters, marking the start of an addictive new series. #booklove #blogtour @orendabooks #lovebooks #books #bookworm #booklover #bookstagram #bookstagrammer #bookblog #bookblogger #bookblogging #bookshelf #publicationday
A lovely late delivery from Amazon. #sarahstovell’s #TheHome. My first red hot read of 2020. #booklove #booklover #lovebooks #thriller #books #bookstagram #bookstagrammer #bookblogger #bookblog #bookblogging