It is my absolute pleasure to be one of today’s stops on the blog tour for Rupture, the lastest book in the Dark Iceland series by Ragnar Jónasson. Book four and every bit as enthralling, atmospheric and beautiful as I’ve come to expect and once more skilfully translated by Quentin Bates.

Siglufjörður is in lock down, the entire town in quarantine after a wealthy French visitor brought more with him than just a private plane and a desire to visit the Herring Era museum. Having died from a highly contagious virus, the authorities are taking no chances and the entire place is like a ghost town. Ari Thór is one of the few people to remain out and about as he and his boss, Tómas assist in keeping the town afloat while shops and services can no longer run.

Bored by his isolation, he agrees to help one of the town’s residents, Hédinn, to look into an old case – the death of his Aunt Jórunn at a remote farmstead next to the fjord in Hédinsfjörður which sits across the mountains from Siglufjörður. Officially ruled an accident, Hédinn is not convinced, and after a comment made by his father shortly before he died, is certain there is more to learn of their time in the remote and wild location.

Itrigued by the tale, Ari Thór starts to make enquiries. He has little else to occupy his time and Tómas is increasingly distracted. When Reykjavik based journalist Ísrún contacts him for an update on the situation with the virus, he agrees to an interview in exchange for her help with the investigation.

Her natural curiosity piqued, Ísrún agrees to interview Jórunn’s brother in law to see what information he may have gleaned from his brother over the years. But there are bigger, more urgent stories breaking down in Reykjavik which draws her attention away. A young boy has been abducted in broad daylight and the son of a former politician has been killed in an apparent hit and run. Determined not to be scooped by her boss Ívar, Ísrún sets to work trying to find out the shocking truth in the two cases.

As both Ísrún and Ari Thór will uncover, secrets cannot stay buried forever. Sooner or later the sins of the past will always come back to haunt you.

Oh what a story. Much like the preceding novels, there are no big whizz bang revelations, no high speed chases and no intense moments of jeopardy but then this is what I like about this series of books. It is so beautifully written, such an absorbing read that relies on the building of atmosphere to deliver chills that it does not need to be. The way in which Ragnar Jónasson establishes and delivers the picture of the remote Icelandic town of Siglufjörður is just perfect, and more so with the descriptions of Hédinsfjörður which seems incredibly bleak and isolated. The descriptions of the journey made by one of the residents of Siglufjörður in order to take pictures of the remote fjord are inspired, as is much of the series, by his own Grandfather and his writings on the town, but are perfectly captured and recounted on the page here that it feels new and undiscovered.

There are probably what seems, at first, to be three distinct threads throughout this book. The story of Jórunn and her unexplained death which Ari Thór is investigating; the story of the hit and run involving the politician’s son who thinks he is finally about to get his big break in the music industry, and the abduction of the small child by someone who may well have been stalking the family home. The story moves seamlessly between the three investigations with Ísrún providing the only true link between them. It means that a large portion of the book moves away from the traditional setting of Northern Iceland into the streets of Reykjavik and yet the atmosphere is no less taught.

We already know Ísrún from her appearance in Black Out and are aware of her struggles, both personally and professionally. It is nice to learn even more about her character throughout the book, seeing her in her family situation as well as her professional one. She is a journalist through and through, with an engaging and enquiring mind, a nose for a story and a need to find the truth, if only not to be scooped by another journalist. In many respects she is very similar to Ari Thór with his need to discover the answer to the puzzle and this certainly helps the story to flow back and forth between the two locations.

The mixture of cold case (no pun intended) and new is matched by the perfect pacing. There is more tension and a greater sense of jeopardy in the current cases, particularly that of the missing child, and Jónasson creates this with assured ease, tapping into the thoughts of the boys step-father, a man on the edge who is holding too many secrets of his own, and the utter despair and desolation of his mother as she weeps for her missing child. Even the urgency of Ísrún’s investigation, her frustration when she cannot get information from her police informant, is indicative of the flow of the story. It informs the pace.

When it comes to the cold case back in Siglufjörður, the story visibly slows, echoing the isolation and slow yet bitter winds of its location. The creeping and growing sense of foreboding that Ari Thór feels when visiting the ruined farmstead with the Priest is surely also felt by the reader and whilst drawn in by whispers of the past, you also feel the need to escape. To move away as fast as possible before you too fall fowl of the depression which must have affected the family who lived there.

Although not as dark as its predecessor, Black Out, it is still a story with a tainted and deepening shadow at its heart. All of the events are built upon a foundation of lies and deceit. Whatever the resolution, there can be no winners and the lives of all involved are clouded by indelible changes. Another superb read and a fine example of the way in which Jónasson uses atmosphere to create the ultimate sense of dread while not sacrificing the integrity and authenticity of the setting.

A remote and atmospheric, glad to be back in Iceland 5 stars.

‘Rupture‘ is the fourth book in the Dark Iceland series and is available to purchase at the following links. My thanks to Orenda books for the ARC of this book.

1955. Two young couples move to the uninhabited, isolated fjord of Hedinsfjörður. Their stay ends abruptly when one of the women meets her death in mysterious circumstances. The case is never solved. Fifty years later an old photograph comes to light, and it becomes clear that the couples may not have been alone on the fjord after all…

In nearby Siglufjörður, young policeman Ari Thór tries to piece together what really happened that fateful night, in a town where no one wants to know, where secrets are a way of life. He’s assisted by Ísrún, a news reporter in Reykjavik, who is investigating an increasingly chilling case of her own. Things take a sinister turn when a child goes missing in broad daylight. With a stalker on the loose, and the town of Siglufjörður in quarantine, the past might just come back to haunt them. 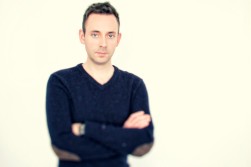 Icelandic crime writer Ragnar Jónasson was born in Reykjavik in 1976, and currently works as a lawyer, while teaching copyright law at the Reykjavik University Law School. In the past, he’s worked in TV and radio, including as a news reporter for the Icelandic National Broadcasting Service. Before embarking on a writing career, Ragnar translated 14 Agatha Christie novels into Icelandic, and has had several short stories published in German, English and Icelandic literary magazines. Ragnar set up the first overseas chapter of the CWA (Crime Writers’ Association) in Reykjavik, and is co-founder of the international crime-writing festival Iceland Noir, selected by the Guardian as one of the ‘best crime-writing festivals around the world’. Ragnar Jónasson has written five novels in the Dark Iceland series, and he is currently working on his sixth. He lives in Reykjavik with his wife and two daughters.

The Dark Iceland series is made up of the following titles available now:

Please take a moment to stop by one of the other fab blogs on this tour.

Today I’ve been sharing my thoughts on Dark As My Heart by Antti Tuomainen over on the blog.
Playing review catch up
Today I’m sharing my thoughts on The Last Time She Died by Zoë Sharp.
A big thank you to @headlinebooks for this #gifted #bookpost - a copy of Good Cop Bad Cop by @simon_kernick. Really looking forward to reading it for the @randomthingstours next month.
Treated myself to a new book this week - Billy Connolly’s Autobiography. Can’t wait to read it.
Today Mandie shared her thoughts on Facets of Death by @detectivekubu over on the blog.