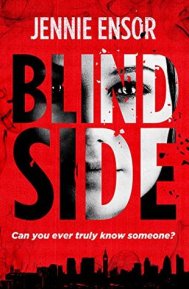 Can you ever truly know someone? And what if you suspect the unthinkable?

London, five months before 7/7. Georgie, a young woman wary of relationships after previous heartbreak, gives in and agrees to sleep with close friend Julian. She’s shocked when Julian reveals he’s loved her for a long time.

But Georgie can’t resist her attraction to Nikolai, a Russian former soldier she meets in a pub. While Julian struggles to deal with her rejection, Georgie realises how deeply war-time incidents in Chechnya have affected Nikolai. She begins to suspect that the Russian is hiding something terrible from her.

Then London is attacked…

Blind Side explores love and friendship, guilt and betrayal, secrets and obsession. An explosive, debate-provoking thriller that confronts urgent issues of our times and contemplates some of our deepest fears.

‘Blind Side‘ by Jennie Ensor is an intriguing read and I have to be honest not at all what I was expecting when I read through the blurb. There are so many elements to this book which take it beyond a simple star crossed lovers kind of romance, or even a case of obsession, and the book touches upon many socio-economic issues which are as prevalent today as they were in the time that the book was set, few months surrounding the 7/7 bombings in London.

Georgie is a complex character. She has been burnt before when it comes to love and has all but given up on the idea of it. Her biggest mistake, and biggest regret, is agreeing to sleep with Julian. This sets the pair on a course which cannot be halted and cannot be reversed. In this respect, she is a little selfish, although that does not excuse what comes to pass. Where she becomes really interesting though is when the author explores her fears; the concerns she has over Nikolai and the secrets he is keeping from her. Hurt as a child, she has had many ideals foisted upon her and this too impacts upon how she views life. Unlike her family and friends, she is able to look beyond the damaged part of Nikolai and see the beauty of the man he used to be, but this is as much obsession on her part as it is absolute trust, a fact which almost tears them apart. I did like Georgie, and she is a very well rounded character. She does however make some very stupid mistakes that left me shaking my head.

Ensor has doen a brilliant job of creating the character of Nikolai. He is wounded, haunted by nightmares of what he lived through during the conflict in Chechnya. There are also many hidden elements of his character, things he doesn’t tell Georgie, and as the book is told mostly from her perspective, things we are the reader are also not privy to, which meant that much like Georgie I wasn’t sure he could entirely be trusted. It is only little clues, random notes, snippets of telephone conversations which lead the doubt, rather than relying on overt prejudice to suggest that all Russians must be bad people.

The only other real voice in the book is told from a first person perspective where to start you have the strongest notion of which character this is, but it is not absolutely confirmed. This becomes clearer as the narrative goes on and he is a truly creepy and utterly obsessed man. The snippets of voyeurism, following Georgie and Nikolai and the threats to Nikolai are very well written, the balance just right to stop him becoming a bit of a joke. Perhaps the most disturbing parts of the campaign of terror are the emails sent to Georgie. Very unnerving and a clear example of a slowly devolving mind.

The pacing in this book is just right. When needed, along side Georgie, we look into more detail of the conflict in Chechnya, gain a greater understanding of the history of this awful war. Again, the balance here is just right. Too much would have pulled me out of the story. It was just enough to help me understand the pain and torment that Nikolai is going through. Also when the mention was made of the 7/7 bombings in the blurb, I was expecting something much more, I don’t know. Conspiratorial maybe? There is an element of conspiracy I suppose, Ensor tapping into and capturing perfectly the suspicion of everyone who was different, especially Muslim communities, in the immediate aftermath of the bombings. However this is not overplayed. It is not a central theme in the book but it does inform what happens in the latter part. The book also explores the growing hatred for immigrants, something which sadly has not changed today.

I don’t read many romances because I’m not a hearts and flowers kind of a girl as a rule. They need to be a) pretty blinking funny or b) a little on the dark side. This one definitely falls into the latter category. I was engaged by it, intrigued by Nikolai’s story. Wanted to see if the pair could make it against all the odds, all the opposition and words of warning from Georgie’s family and friends. How could a relatively well-off young professional and a damaged Russian ex-soldier ever really work.  But they did, rather beautifully as it turned out. The writing drew me in, the descriptions neither graphic nor lacking in detail and the story truly compelling, a prime example of the danger of lies and prejudice.

This book has a little of something for everyone. A psychological element as we follow Georgie’s stalker and wonder how far he is willing to take things to make her love him and believe me when I say that this element leads to a surprising ending. You have a love story, a kind of against all odds relationship between Georgie and Nikolai which is passionate but in the same sense almost sweet. Finally you have well researched history and essence of social commentary which, sadly, is as relevant and fresh today as it would have been back in 2005. The ending… Well it’s less of an ending, more a new beginning leaving Georgie, and the reader, with a whole world of possibility.

An intriguing and sometimes chilling 4 stars.

I received a copy of this book from the author. ‘Blind Side‘ is available to buy now from the following links.

One thought on “Review – ‘Blind Side’ by Jennie Ensor (@Jennie_Ensor)”