So, Christmas and my #bookvent countdown are both over. While I have narrowed my list down to 25 favourites from 2016, there are so many more I wish I could have chosen. So, because I am nice (apparently) and really didn’t want to leave anybody out (even though I have to), here are some more of my top recommendations from books I have read this year (because my blog – my rules! And you’d be a fool to miss these beauties).

First up is a book which only wasn’t in my top 25 because the paperback isn’t published until January 5th and I haven’t yet published my review. But if this isn’t a 2017 smash hit and this author isn’t back again and again with this series (that I know will run and run and run), then I’ll eat my hat. About to become another Orenda classic is:

Oh. My. Word. Bam … From the intriguing opening (our heroine is beaten, bruised and in handcuffs) I was hooked. And from the moment Lori starts to tell her story, the action kicks up a notch, the pace is frantic and there is absolutely no let up. And I wouldn’t have it any other way. Lori is a kick-ass, brash, stripper-turned-bounty hunter with a smart mouth and a smarter mind. The chemistry between her and her ‘assignment’, JT, is absolutely spot on. The authenticity which oozes from every page and the brilliant portrayal of Lori, language, intelligence, mannerisms, is just so assuredly written I seriously can’t believe this is a debut. I also know I don’t want to tick this author off. I’m led to believe (following  Bounty Hunter training) that she really knows how to use the kit described in this book. With the possible exception of the ‘gators. Or … maybe not?

And the best news? She’s already working on book 2 for a 2018 release. Whoop whoop.

My full review will be published in January as part of the blog tour. ‘Deep Down Dead’ is being released in paperback in January by Orenda Books. The e-book is out now and is available to purchase from the following links:

by Too Many to Mention…

Next up I’m putting a collection of books, all published under the Bookouture label. You may have guessed from previous posts and my feature fortnight but I really can’t get enough of this publisher and their authors – they are superb. When I think of Publishers who I implicitly trust to keep me entertained, the two names which immediately come to mind are Orenda and Bookouture. Now I can’t list all of their authors all over again (well I can but I’m trying to practice restraint… ish), so here are my ‘best of the rest’. Purchase the books from the links below.

Love You To Death by Caroline Mitchell: Amazon UK     Amazon.com

See How They Run by Tom Bale: Amazon UK     Amazon.com

The Girl In The Ice by Robert Bryndza: Amazon UK     Amazon.com

The Girls Next Door by Mel Sherratt: Amazon UK     Amazon.com

Her Turn To Cry 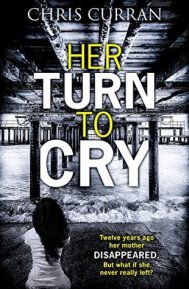 This book is by another author I ‘discovered’ at CrimeFest: Chris Curran. ‘Her Turn To Cry’ is the story of a young model, Joycie, who following the death of a close family friend, finds herself wanting to try and find out what happened to her mother who disappeared when she was just a child. But someone wants to stop Joycie from finding out the truth, someone who would rather the past remain just that… the past. Set in 1960’s London, there is a real feeling of authenticity to the book, and the story is both emotive and gripping in equal measure. This book really drew me in as I wanted to know just who wanted to stop Joycie and why although from early on I had an inkling as to what part of the disturbing truth may be. My full review can be found here. The book can be purchased at the following links.

Probably the newest release I have read, ‘Witness‘ is the story of Rebecca, a young woman who gave testimony against her former fiance for the murder of a colleague, this book will test your nerve and challenge your understanding of what is right and wrong. Set an almost impossible number of choices by Solomon, Rebecca is forced to witness and ever increasing level of violent crime against friends and neighbours. Staying silent is a risk, speaking up is impossible. This is such a twisted and gripping tale and from the off I felt both loathing and fascination for Solomon, and both empathy and disbelief towards Rebecca. The characterisations were perfect, Solomon being one of the most chilling and manipulative characters I have read in a while. I hated having to walk away from this one as every second I turned away felt like a moment I could be missing something vital. I found myself, as a reader, a silent witness much like Rebecca, compelled to keep watching no matter how much revulsion I may feel. With a fast paced, high stakes ending, this is an truly thrilling read. My review can be found here. ‘Witness‘ can be purchased from the following links:

Before I Let You In

‘Before I Let You In‘ by Jenny Blackhurst is a brilliantly twisted story of psychiatrist Karen and her small, close knit group of friends. When she is contacted by a new patient Jessica, her nerves are set on edge as Jessica seems to know far too much about Karen and her friends. From the off, you know there is more going on than is immediately visible but I wasn’t prepared for the tragedy and carnage that ensues. Told through a combination of ‘live’ action and notes from therapy sessions, the threat is implicit throughout, the misdirection simple and yet so effective. This is a read in less than a day book because you won’t want to turn away. Whenever the next book is out, I’m definitely in. And the author’s a local lass to me so how can she go wrong? My review can be found here. You can purchase the book at the following links:

‘The Devil’s Work‘ is my first Mark Edwards book. I know! Don’t shoot me. I’m on a nearly two-decade reading catch up here. Sophie Greenwood is returning to work after taking time out to raise her young daughter. She has her dream job working for the Jackdaw Books and everything seems perfect. Far from it. This is a story of abuse, of a long held hatred and of revenge. Even Sophie has secrets that she cannot share and the twisted truth of her past could ruin everything she holds dear in her present. A perfectly chilling thriller with some truly creepy elements it sets out to unnerve you from the off. And does it ever. My review is here. ‘The Devil’s Work’ can be purchased from the following links:

The Girl Who Walked In The Shadows

& The Girl Who Had No Fear 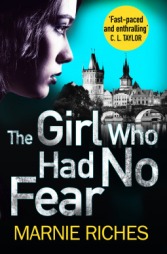 A double header and again a series I hadn’t read before this year. However our heroine and the eponymous ‘girl’ George McKenzie and her grumpy older lover, Paul Van den Bergen worked their way into my heart very quickly. Two very heard hitting and tense books, they couldn’t be more different and yet are inextricably linked. Taking the reader from the frozen streets of London, to the hot and humid jungles of Central America, the pair end up doing battle with two of their greatest foes with very high personal stakes for George. Missing children and missing parents and tension greater than a tightly coiled spring. You’re in for a rickety roller coaster of a ride with this pair but jump in and buckle up. I can promise it will be worth it. My review for ‘Shadows’ is here, and for ‘No Fear’ you can find it here. They can be purchased at the following links:

The Girl Who Walked in the Shadows: Amazon UK

The Girl Who Had No Fear: Amazon UK 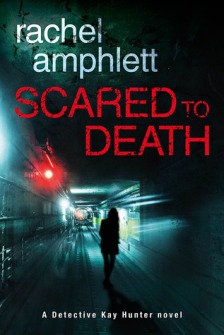 One of the most recent reads of 2016 and also one of the best starts to a new police procedural series I have read. With tension high from the outset, it features a brilliant new lead detective, Kay Hunter, and a killer with absolutely not compassion. Semingly a kidnapping gone wrong, the plot is intriguing, more of a why than who dunnit as we know that early on. But there is a secret thread running throughout, an incident which blights Hunter’s career and puts her in conflict with a colleague. I love Rachel Amphlett’s Dan Taylor series and I can’t to spend more time in the company of Kay Hunter. My review is here and you can discover the series for yourself at the following links:

I am so honestly ashamed to say that this is the first book in the Anna Fekete series that I have read but I can guarantee I will be going back to read the first two as soon as I can. With stunning imagery and an intriguing mystery which links back to Anna’s own family, this book dares to unashamedly ‘out’ and challenge the prejudices which are commonly growing across Europe about refugees and, in this case, Romani people in Serbia who are believed to be lower class citizens by virtue of their culture. With a thread of deception and corruption throughout, this book highlights the division in class, and the barriers of culture and language which exist within Anna’s home town, even amongst neighbours who have a different mother tongue. The story is gripping, Anna’s determination to investigation unwavering and as character I have really grown to like her. With a brilliant translation, the narrative is beautifully flowing and the sense of setting, of time and place, created by the author has a true feeling of authenticity. I absolutely recommend you go and check this series out. My review is here, and the book can be purchased at the following links:

This book itself makes reference to the fact that for ages nothing ever seems to happen and then everything happens all at once. The same can be said for buses and in my case, finding books to read which are written by superbly talented Finnish authors. I am rapidly falling in love with Scandi-noir and ‘The Mine‘ has definitely put Finland on my ‘home of brilliant literature’ map. This is part environmental thriller and part family drama as the protagonist Janne struggles with the widening gap in his marital relationship and the desire to keep investigating potential corruption and pollution at a remote Finnish nickle mine. This is a truly captivating read, the characters and the plot drawing me in and holding my attention to the very last page, which came all too soon in my opinion. The setting is beautifully recreated on the page, the menace and tension positioned just right and the murder, although clear, not gratuitous in any way. Janne and Emil were very engaging characters and I felt for them both as they battled to resolve their respective conflicts. My review of ‘The Mine‘ can be found here and the book can be purchased from the following links: