So, this past week I’ve had a touch of a reading splurge and made my way through the first three books in Kerry Wilkinson’s Jessica Daniel series. With the US cover reveal for book four having taken place earlier this week, I thought I’d post a taster of what you can expect in the first trio of tales featuring this Manchester based Detective, starting with book 1, ‘The Killer Inside‘ (previously published as ‘Locked In’). 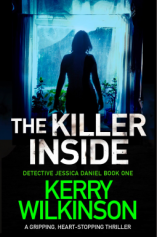 You can lock your doors… but what if the killer is already inside?

When the body of a woman is found in a locked house, Detective Sergeant Jessica Daniel is called in to investigate a seemingly impossible murder. Without a key, how did the killer get in or out?

Jessica is under intense pressure to solve the case fast, but as she and her team chase down flimsy leads, she realizes this might just be the toughest case she has ever handled.

Then a second body is discovered bearing the same hallmarks as the first victim, and Jessica’s worst fears are confirmed: the hunt is for a serial killer, and only one thing is certain: they will strike again.

Can she get to him before the body count rises? And is she prepared to put her own life in terrible danger to catch the murderer?

This is our first introduction to DS Jessica Daniel and what a character she turned out to be. Very down to earth, she has a great relationship with her junior Detectives and a healthy suspicion of those above her. She is not entirely maverick or flawed, but she is determined to solve the cases she is working on and so focused that her actions sometimes put her in harms way.

This is an intriguing case. A literal ‘locked door mystery’. A woman discovered murdered in her bed. All doors and windows are locked from inside, her ex-husband no longer has a key and her son is at University a couple of hundred miles away. She has no enemies and there is no clear motive for her murder. It is a complete puzzle. When another body is discovered, this time male, the case becomes even more confused. But these two are not the only victims and it falls to Jessica and the team to try and link their pasts and find the motives for their murders.

Trying to keep home and work lives separate proves hard for the Detective and soon enough, vital information about the case is potentially compromised. But will it affect the case and can Jessica find her killer before it’s too late?

I really enjoyed this first foray into Jessica’s world. Set in Manchester, the characters feel real, the landscape one of city living but with a more intimate feel than similar stories set in London. There are still areas of depravity and areas of affluence as in all cities, but in this story class is no barrier for the killer. The pacing is good and the main characters likeable enough to keep me reading onward. I’m not sure how I feel about DI Cole. He’s a bit of a cold fish and keeps things close to his chest but he is a good counter to Jessica’s freer nature.

A very satisfied and anti-agoraphobic 4 stars. 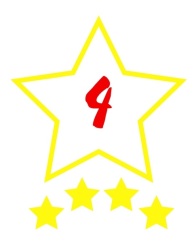 My thanks to Net Galley and Bookouture for the copy of ‘The Killer Inside‘. It is available to purchase from Amazon.com at the following link:

‘Think of the Children‘ the fourth Jessica Daniel book is being published in the US by Bookouture and is released on 26th January. 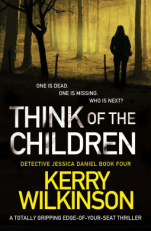 One boy is dead. A killer is free. Who is next?

Detective Sergeant Jessica Daniel is first on the scene as a stolen car crashes on a misty, wet Manchester morning. The driver is dead, but the biggest shock awaits her when she discovers the body of a child wrapped in plastic in the boot of the car.

As Jessica struggles to discover the identity of the driver, a thin trail leads her first to a set of clothes buried in the woods and then to a list of children’s names abandoned in an allotment shed.

With the winter chill setting in and parents looking for answers, Jessica must find out who has been watching local children, and how this connects to a case that has been unsolved for 14 years.

One thought on “Review – ‘The Killer Inside’ – Jessica Daniel Book 1 by Kerry Wilkinson (@kerrywk, @bookouture)”