On today’s feature blog, I’m taking a look back at two of the more recent releases from Bookouture. Two gripping thrillers, one a psychological drama, the other the start of a new police procedural series. Two very different tales of long held hatred and carefully planned revenge, and both absolutely flipping brilliant.

First up is ‘The Girls Next Door‘ the fist part in a new series by Mel Sherratt, featuring DS Eden Berrisford and the residents of Stockleigh.

One warm spring evening, five teenagers meet in a local park. Only four will come out alive.

Six months after the stabbing of sixteen-year-old Deanna Barker, someone is coming after the teenagers of Stockleigh, as a spate of vicious assaults rocks this small community. Revenge for Deanna? Or something more?

Detective Eden Berrisford is locked into a race against time to catch the twisted individual behind the attacks – but when her own niece, Jess Mountford, goes missing, the case gets personal.

With the kidnapper threatening Jess’s life, can Eden bring back her niece to safety? Or will the people of Stockleigh be forced to mourn another daughter…?

From the very opening chapter where a case of mistaken identity leads to a tragedy, you know as a reader that you are in for one very tense ride. With the town preparing for a murder trial involving four local teenagers, emotions are running very high. And when young girls start being attacked with an ominous message left by their attackers, it seems that someone connected to the trial may be set on revenge. But then Eden’s niece goes missing and the police are forced to re-examine the previous attacks to see if there may be some link between them and Jess’s disappearance.

Tense and twisted, as each attack took place I felt my heart in my throat and it was almost a relief that it never went as far as you thought it might. But Jess’s abduction is different, and as the reasons slowly become clear you are put in the strange position of not being sure who it is you are really sorry for. Eden Berrisford is a brilliant and truly likeable new character; down to earth single-mum with a real community spirit. The narrative moves from the present action to letters from one of the teenagers awaiting trial, and with secrets being kept by a number of key characters, suspicion moves freely between them as to who exactly is being held ‘responsible’ for the kidnappers actions in taking Jess. A real heart-thumper of a story and I can’t wait for the next instalment in the series. ‘The Girls Next Door’ was released on 27th October and my full review can be found here. The book is available to purchase here for UK Readers and here for US Readers.

Mel Sherratt writes gritty crime dramas, psychological suspense and fiction with a punch – or grit-lit, as she calls it. Named as one of her home town’s top 100 influential people 2016, she’s sold nearly three quarters of a million books. Shortlisted for the prestigious CWA (Crime Writer’s Association) Dagger in the Library Award 2014, her inspiration comes from authors such as Martina Cole, Lynda la Plante, Mandasue Heller and Elizabeth Haynes. Mel lives in Stoke-on-Trent, Staffordshire, with my husband and terrier, Dexter (named after the TV serial killer) and make liberal use of her hometown as a backdrop for some of her books.

The second book and author on my blog today is the brand new psychological thriller from KL SLater, ‘Safe With Me‘.

Thirteen years ago someone did something very bad to Anna. Now it’s her turn to get even …

Anna lives a solitary existence, taking solace in order and routine. Her only friend is the lonely old lady next door. She doesn’t like to let people to get too close – she knows how much damage they can do.

Then one ordinary day Anna witnesses a devastating road accident and recognises the driver as Carla, the woman who ruined her life all those years ago. Now it’s Anna’s chance to set things straight but her revenge needs to be executed carefully …

But as Anna’s obsession with Carla escalates, her own secrets start to unravel. Is Carla really dangerous or does Anna need to worry about someone far closer to home?

What would you do if your childhood had been ruined by one senseless act of violence? What if the very person you held responsible suddenly burst back into your life, this time hurting another innocent person? That is the very quandary facing Anna, the solitary, slightly OCD postal worker who witnesses a road traffic collision caused by the very person she hates the most. Determined to not let this person slip away again she befriends the victim, Liam. But nothing is quite as it seems and Anna’s obsession may become her undoing. A tense psychological thriller, this book will have you questioning everything. Anna is not a reliable narrator and there are some dark passages told in another voice which twist your understanding even more. And with the look back at the past through the eyes of Anna’s nemesis, a gradual build to a shocking finale will leave you reeling.

The characterisations are superb; you can see the steady unravelling of one of the main protagonists, and the passages told in anonymous voice are chillingly detached and so well written. And the sub-story, the tale of Anna’s childhood – it is so sad and so moving. No matter how you may feel about Anna’s actions, you can understand why it happens. And believe me, in this tale, everyone has the capacity to shock you.

My full review can be found here. ‘Safe With Me’ was released on 3rd November and is available here for UK Readers and here for US readers. 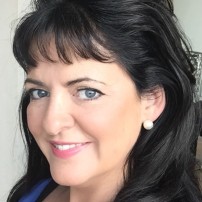 For many years, Kim sent her work out to literary agents but never made if off the slush pile. At the age of 40 she went back to Nottingham Trent University and now has an MA in Creative Writing.

Before graduating, she received five offers of representation from London literary agents, which was, s Kim says, ‘a fairytale … at the end of a very long road!’

Kim is a full-time writer and lives in Nottingham with her husband, Mac.