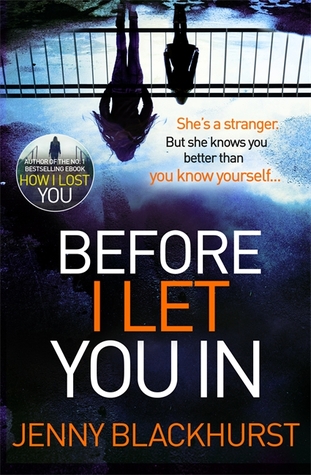 Karen, Eleanor and Bea have been friends since they were five years old. They all lead very different lives and yet their bond seems to be unbreakable. Karen is a psychiatrist, always wanting to help her friends and fix theirs and other people’s problems, unimpeachable in her attitude to life and language. Eleanor is the dutiful wife and mother, her life governed by baby feeds, dirty nappies and school runs. Bea is the life the soul of the group, her life one big party. Or so it seems. But appearances can be deceptive. Even the closest of friends can still have secrets.

When Jessica walks into Karen’s office seeking help with a problem she is having, Karen is immediately set on edge. There is something different about her new patient. Something which makes Karen feel like she is the one who is being assessed. Because Jessica seems to know too much about Karen’s life, her friends, her family. Her past.

And then things start to happen that threaten the peaceful harmony of the happy band of friends. Accusations of adultery are rife, people’s nerves are set on edge by reminders of a past they would rather forget and somebody seems to be set on driving a wedge between them with the direst of consequences.

‘Before I Let You In’ is a gripping psychological story which I ate up in less than a day. From the very opening I was drawn in, intrigued by the styling of the first chapter, which is that of a psychological assessment. It is a set up for the main story and is continued at varying points throughout, informing more of what you will read in the subsequent chapters. It is set in the present, the majority of the action in the book taking place sometime before, although this is not immediately apparent. What is also not apparent is whose voice we are hearing, although that is soon cleared up. It is a very clever device which works well to propel the story forward, yet still giving the reader a chance to reflect on what has happened so far.

The characters of Karen, Bea and Eleanor seem like your everyday group of ‘girlfriends’ – too loud in café’s, know everything about each other and always doing all they can to be there for one another. Karen is clearly the mother hen of the group, seeing it as her job to look after the other two, and as such she is always there in the thick of all of the action, a lot of the story being told from her point of view. Theirs is a very well written friendship, and it is easy to get to like all of the characters, making some of what is to come all the more surprising.

In Jessica, we get the sense of a slightly on edge young woman, that there is more to her than she reveals in her sessions with Karen. It is not so much that she is physically threatening, it is more what she says and how she acts that makes you believe she may be a threat to Karen and her friends.

Most of the passages are written from the point of view of one of the main characters. You see the insecurities of Bea who tries hard to hide this from her friends, the slow unravelling of Eleanor’s nerves as she sinks into a kind of post-natal depression, and the duplicitous nature of Karen whose personal life is more complex than any of her friends could have suspected. Intertwined within their narratives are some anonymous passages, someone who clearly has a less than stable mind and an inherent jealousy of the close bonds between the friends. Just who this is we do not find out until the end of the tale.

There are enough twists in this story to keep you guessing throughout as to what may have happened and who could be responsible. Simple misdirection is so brilliantly executed that even right up until the last pages, I don’t really think I really believed or knew who was behind the torment that the friends suffer. The identity of Jessica may have been a little more obvious than other questions which were raised throughout, but it didn’t mean that I had the whole plot worked out by any stretch. And it was the little touches of wickedness which really brought the tension to life. There was no need for a big bang shock moment when the perpetrator was slowly chipping away at the friends defences every step of the way.

My thanks to NetGalley and publishers Headline for the advance copy of ‘Before I Let You In’ in exchange for my review.

‘Before I Let You In’ is available from 28th August and can be purchased here: